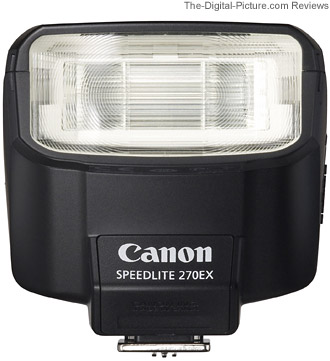 Like the rest of the "EX" series Speedlites, the 270EX is compatible with all EOS camera bodies and many Canon Powershot point and shoot cameras. The small size and low weight of this flash make it especially attractive to the latter. 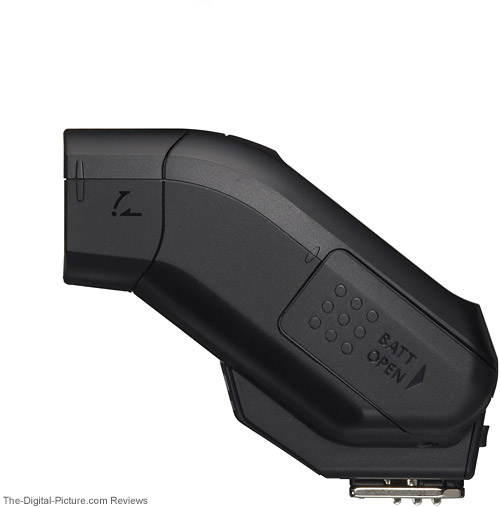 The Canon Speedlite 270EX Flash's biggest enhancement over the 220EX, by far, in my opinion, is the bounce-capable head demonstrated above. While the adjustment range is very limited (no swivel, 90° tilt), any bounce capability is a big improvement over the fixed position 220EX head. A new 2-position manual zoom option allows the 270EX to concentrate its light on the framed subject - making more efficient use its power and extending its useful distance. Note that only the telephoto zoom setting can be used in any of the bounce orientations.

Several features seen first in Canon's other "EX II" flashes are inherited by the 270EX. These include the ability to control flash settings from a compatible camera's menu (including manual flash mode settings), the communication of color temperature information with a compatible camera (for optimal white balance) and silent charging. 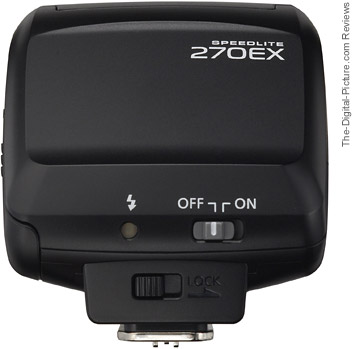 The back of a flash does not get much more featureless than this. Not even a test button. The camera menu system is relied upon for this flash's settings.

Batteries are heavy - the Canon Speedlite 270EX Flash shaves 50% off all other EX flash battery weights by reducing the number of required AA batteries from 4 to 2. The 270EX is lighter than the 220EX even without batteries (batteries are not included in the weight specifications below - use NiMH batteries for both cost, environmental and performance reasons). All dimensions below are WxHxD. The ST-E2 is not a flash but a flash transmitter - it requires a 2CR5 lithium battery.

The height of a flash helps the light clear large and wide angle lenses when the flash is directed straight forward. This helps eliminate the dark half-moon commonly seen at the bottom of image taken with the built-in flash and moderate-sized lenses. The 270EX is a very short flash - but - it is shifted forward to give it lens clearing ability. Height also helps reduce the red-eye effect.

What is a "Guide Number"?

Here is how the formula works: For the 270EX Flash guide number of 89' and an aperture of f/8, the maximum distance from the light source should be from the subject is 11.25 feet (89' = 11.25' × 8). Guide Number = Power. More power is better as the flash can adjust to lower power when full power is not required, but more than full power is never available. The 270EX has the same guide number at 28mm as the 220EX has at this focal length coverage - no change there.

Angle of Coverage figures show the flash's native zoom head range and the wide angle coverage available by using the built-in (pull-out, flip-down) diffuser if so equipped. Listed focal lengths are for a full frame body. A 17mm focal length setting on a lens mounted to a 1.6x DSLR such as the Canon EOS 50D requires flash coverage of 27.2mm. Corners become darkened when using lenses wider than the angle of coverage.

Flashes listed with a single focal length range do not have zoom heads. Longer focal lengths can of course be used with any of these flashes, but light falling outside of the framed image will usually be wasted. The 270EX's new 2-position head is an advantage over the fixed 220EX head.

Recycle time specifications are based on new AA Alkaline batteries. NiMH batteries have much less internal resistance than alkaline batteries resulting in significantly shorter re-cycle times (around 33% faster). NiMH batteries also give more consistent (full) power until they are discharged while alkalines will recycle the flash more and more slowly as they expend their life (try Eneloop batteries - they hold their charge very well). When two recycle times are given for a flash, the numbers are referencing rapid and normal charging modes respectively.

All of the above-compared Canon flashes have an AF assist beam for enabling autofocus in very dark or low-contrast situations. With exception of the 50D and the Canon Speedlite 270EX Flash, Canon Speedlite flashes project a visible red grid pattern (yielding both light and contrast) for the camera's AF to lock onto. This beam typically offers coverage for up to a specific number of AF points. Since the 50D and 270EX use a series of flashes for AF, there is no concern about AF point coverage, but there must be existing contrast for AF to work properly. A white wall will likely cause problems. The 270EX has an in-total-darkness effective range of approximately 13.1' (4m) in the center and approximately 11.5' (3.5m) at the peripheral AF points.

E-TTL II (Electronic-Through The Lens version II) is Canon's latest (as of this review date) flash exposure metering system. A preflash along with subject distance information (when available) is used to determine the proper amount of light to provide in the immediately following full exposure flash.

E-TTL II also provides improved white balance when the camera is set to Auto or Flash white balance. "Slight variations in a flash gun's voltage and brightness can destabilize white balance in respective frames during continuous shooting. The Speedlite [270EX] compensates for this by transmitting color information from the flash to the camera. This information is then used to optimize the white balance setting for each individual image." [Canon]

Manual flash power is a very useful feature. It was not an option on the 220EX, but with a compatible EOS body under this flash, manual flash output can be selected in the menu system. If your subject distance, light levels and camera settings are constant, determine and manually set the proper flash power. Every exposure will be correct.

This will be brief: The Canon Speedlite 270EX Flash has 2 custom functions. These are adjusted using the menu system of a compatible EOS DSLR.

The little chart below says a lot. Canon's wireless remote Speedlite Flash system opens the door for infinite creativity. The Canon Speedlite 270EX Flash does not play well with others in this regard. Third party options are available.

I strongly encourage you to read the Canon Speedlite 430EX II Flash Review before making your purchase decision. You will likely find the comparisons in that review helpful. The 430EX II's additional features and power are valuable in my opinion. I actually recommend the Canon 580EX II Speedlite Flash at the end of that review. And at some point, some budgets will become exceeded.

The Canon Speedlite 270EX Flash will make a nice flash when small size, light weight and low cost are priorities over features and power. With some limited bounce functionality, the 270EX can deliver better image quality than no flash or the built-in flash.

Where you buy your gear matters. You expect to get what you ordered and you want to pay a low price for it. The retailers I recommend below are the ones I trust for my purchases. Get your Canon Speedlite 270EX Flash now from: