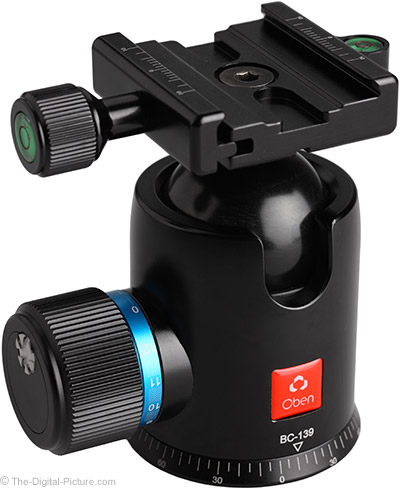 Ball heads are the best type of tripod head for general purposes and play a crucial role in my support kit. I've been privileged to have the best and have been reluctant to review anything less. Reviewing a piece of gear means that I have to use it – and deal with any negative effects that result from using that piece of gear – including degraded image quality or hampered ability to capture the ideal image.

Narrowing down the ball heads I'm willing to give a serious try has been rather easy for me, and very few models remain after my quick three step test.

Test 1: Is the ball head clamp compatible with the Arca-Swiss standard clamp and plate system?

The Arca-Swiss standard clamp and plate system allows quick and solid attachment of cameras and lenses to compatible quick release clamps typically found on tripod and monopod heads. Because this standard is widely supported by accessory manufacturers, it is easy to find best-available accessories compatible with this clamp and plate system. These accessories include camera L-plates, lens plates, camera strap and holster systems, flash brackets, panorama systems, macro focusing rails and many, many other accessories.

Test 2: Does the subject framing change as the head is tightened down?

You can get most heads locked down tightly, but as they tighten, the ball moves inside the housing slightly in many ball head models – moving the camera position slightly. This drives me crazy. I'm using a tripod because I want to lock down perfect subject framing. To have to guess where that framing will be after the head is tightened is very frustrating and potentially time consuming. If I'm shooting something time-dependent, the result can be fewer or less-ideally-framed images. Shooting an epic sunset is an example of a time-dependent situation where I want as many captures as possible in the few minutes of ideal sky color. There are some otherwise very nice ball heads on the market that I don't use because of this issue.

Test 3: Does the ball slip-stick when nearly tight?

Kinetic friction coefficients are lower than static friction coefficients, and when a ball head reaches the point of changeover from kinetic (moving) to static (not moving, locked) friction, a slip-stick phenomenon can occur. The resulting jerky slip-stick motion makes it very difficult to finely adjust subject framing as the ball head is tightened.

Again, I'm using a tripod to get perfect subject framing. If I'm going to be fighting my head for that ideal framing, I'm probably going to get frustrated. Slip-stick is not the end of the world, but it does make subject framing more difficult and time consuming than it needs to be.

Slip-stick is easy to test for. Each year, I walk the PhotoPlus Expo checking out the huge array of gear on display. As I walk past the ball head displays, I tighten the main friction knob of each while applying strong pressure on the clamp to see if they remain smooth until locked tight. A surprising number fail this test at least at some level. 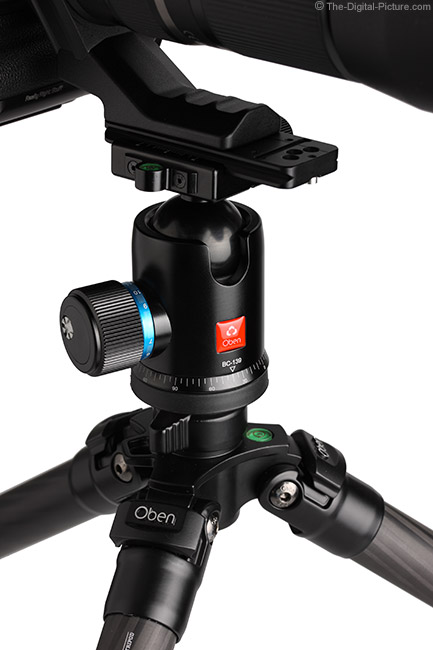 Most of you following this site know that my favorite ball head is the Arca Swiss Z1. This is the head used to capture most of my tripod-based sample pictures since the Z1 was first available in early 2007. Before that, it was the Arca Swiss B1 that I relied on.

While I think it is a great value in my kit, the Z1 is not the least expensive head available. And I've been looking for more affordable models to recommend to those not willing/able to spend at the Z1 level.

At B&H Photo's urging, I accepted an Oben brand ball head with a review promised. I had tried an Oben head at B&H's superstore and knew that the head had potential. So, I was not going into this review completely blind. But I was making a commitment to using this head for work that mattered to me.

Oben makes a range of ball head sizes ranging from small travel heads up to one model size larger than the BC-139 I selected. My choice for the BC-139 was due to its height and weight similarity with the Z1. I don't like my head to be too high as the center of gravity is best kept low and I of course like light weight when carrying the head. This Oben head is narrower than the Z1. 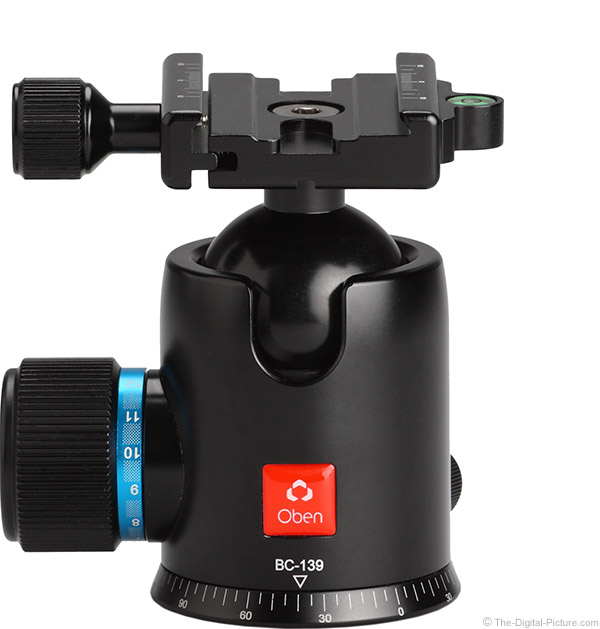 Most ball heads share a similar overall design and the Oben is included in this group. The Oben ball heads are very sharp-looking with a much-desired clean, simple design and a nice touch of color.

Starting at the bottom of the head, we find the indexed-in-degrees panning base. The panning base is flared to nicely taper the tripod mounting plate to the often smaller diameter of the ball head as shown below. Note that the panning base will lock if the set screws on a tripod top plate are made too tight (which is not very tight). I do not use set screws on my ball heads because I change them out with some frequency (to install A Wimberley Gimbal head or to test another ball head to give two examples), but note that this may be an issue if you count on these screws being very tight. 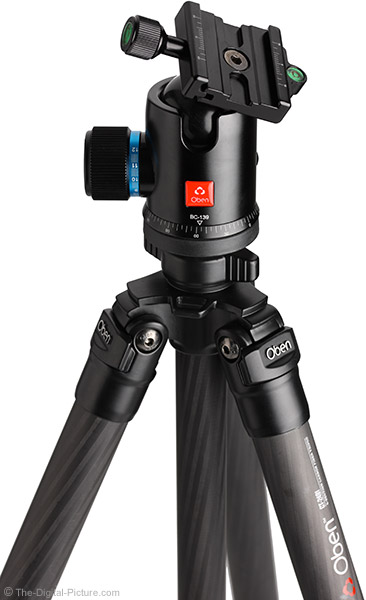 The flare also provides a better grip for head installation and removal. The base on the travel ball head models is not flared, allowing the travel-style tripod legs to fold upward over the narrow ball head base for ultimate compactness.

Like the Arca-Swiss Z1, the largest three Oben ball head sizes (BC-something models) have a silver tension adjustment screw on the locking knob (for setting the minimum friction level). Including this tension screw on the locking knob vs. having an additional knob and stem coming out of the head is a great design and means one less knob to confuse with the panning base locking screw. This screw is fingertip adjustable.

The ball head body is constructed of heavy aluminum with the typical drop notch for shooting upward or downward at hard angles or for orienting a sans-L-plate camera body vertically. The 44mm ball is also constructed of aluminum with an extraordinarily smooth hard anode oxidation treatment applied to the ball surface. 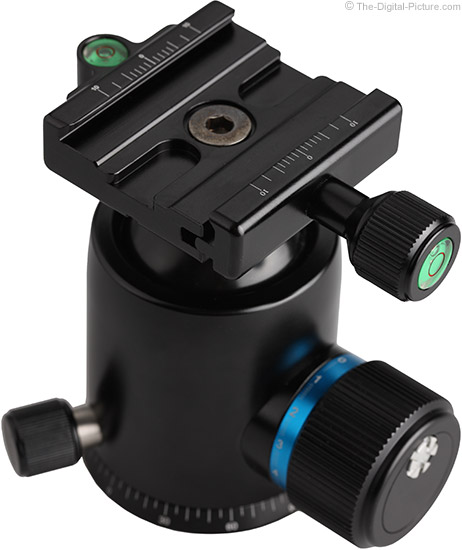 On top of the ball stem is an indexed Arca-Swiss-standard-compatible quick release clamp. The clamp locking knob is captive and has a bubble level on the end. The locking knob is not the quick-rotation type (such as the one on the Acratech GV2 Ball Head), but it locks tightly to plates from Wimberley, Really Right Stuff, Oben (of course) and others. A second bubble level is attached to the side of the clamp.

The clamp is removable via a metric hex key wrench. Removability does not appear to be an intended feature as the wrench is not provided and the bolt is very tight. As always, remove and replace at your own risk. 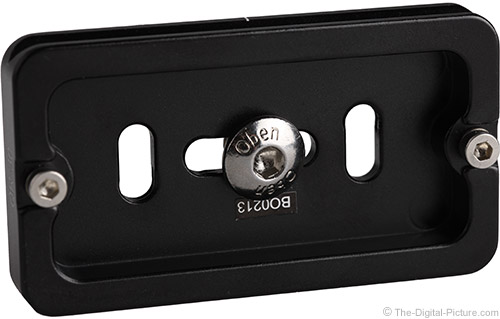 The BC-139 comes with an Oben QR-30 Universal Quick Release Plate. This plate is a $24.95 value (at review time) and is a good deal at that price. The QR-30 is compatible with the Arca-Swiss, Wimberley and Really Right Stuff clamps I tried it in, but only when the safety screws/studs are removed. The safety screws help prevent the plate from slipping out of the clamp, but non-Oben clamps are not routed deeply enough for the higher profile of Oben's safety studs. The QR-30 includes an index mark.

Oben backs up this head with a limited 5-year warranty.

The Oben BC-139 Ball Head smoothly passes my three initial tests. The clamp is compatible with Arca-Swiss standard plates, subject framing is not shifted with tightening of the main friction knob and there is no slip-stick phenomenon as the ball is tightened. Passing these three tests place this head into a somewhat elite class and the Oben head impresses in is performance otherwise.

I have had camera and lens combinations as large the Canon EOS-1D X and Canon EF 600mm f/4 L IS II USM Lens mounted on the BC-139 with no trouble. This combination held solidly even at a hard downward angle. 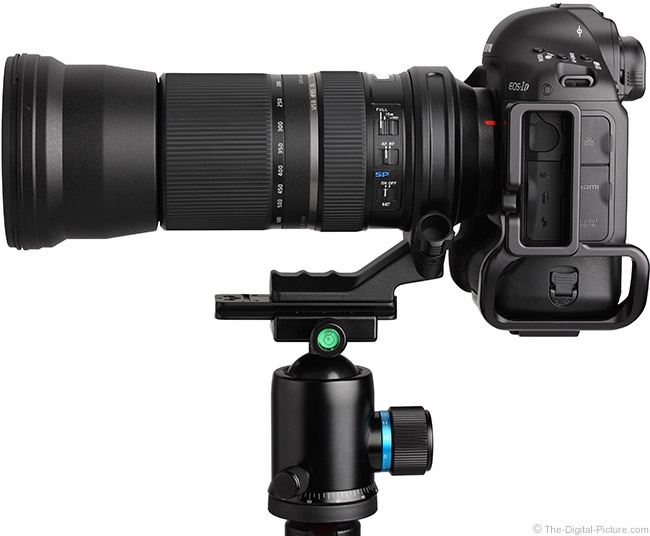 The tripod is an Oben CT-2491 Carbon Fiber Tripod.

I plan to move the Oben BC-139 Ball Head into dedicated use for testing lens flare. Lens flare testing requires precise framing with potentially large, heavy lenses at a strong upward angle. The Oben BC-139 should work perfectly for this use. 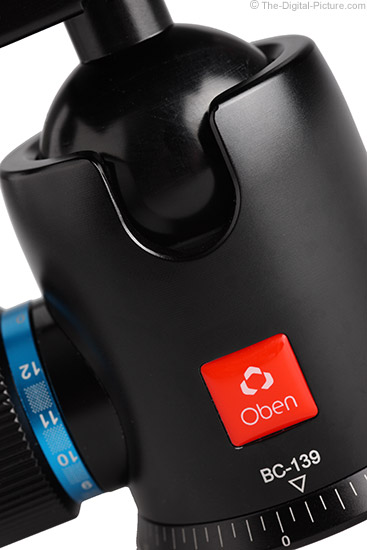 Excellent performance combined with a price tag that is less than half that of the Arca Swiss Z1 (without a plate) makes the Oben BC-139 Ball Head a very impressive value. Add the BC-139 to your short list.