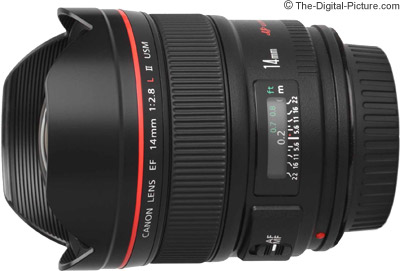 Like all Canon L Series Lenses, the Canon EF 14mm f/2.8L II USM Lens has a high build quality that feels great in use. The non-extending 3.1" x 3.7" (80mm x 90mm)(dxl) size and 22.7 oz (645g) weight combine to make this a very a nice handling lens. A bulging convex front lens element and a built-in metal lens hood are identity features of this lens. Because of these features, a normal flat lens cap cannot be used (more later) and a front filter cannot be mounted on this lens. A rear gelatin filter holder is provided. These filters are required to be cut to size and installed with the lens dismounted. Circular polarizer filters cannot be used.

The 14 L II is weather sealed. As described in the manual, "Tight seal structure ensures excellent dust-proof and drip-proof performance" and "rubber ring [at lens mount] for enhanced water and dust resistance." While the sealing in this lens is not different than the rest of Canon's weather-sealed non-super telephoto lenses, it is not able to accept the protective front filter that is recommended for full weather resistant protection on these lenses.

The Canon EF 14mm f/2.8L II USM Lens features a rear focusing system driven by Canon's excellent USM (Ultrasonic Motor). It delivers fast and quiet autofocusing. At this focal length, I don't find focus speed to be a real important factor ... but fast is always better than slow as long as it is accurate. I am getting excellent AF hit rates in my real world shots, but strangely had some inconsistencies in my comparison testing. At this point, I am writing these inconsistencies off as too many areas of contrast for the camera to choose from in these select shots. A lens this wide can certainly take in a lot of subjects with autofocus-attracting contrast. FTM (Full Time Manual) focusing is enabled and the focus ring is smooth and well-damped.

Where the 14 L II really excels is in optical performance. It is sharp wide open and even slightly sharper stopped down.

Full-frame corners are impressively sharp for a lens this wide. The biggest noticeable difference in image quality generated by stopping down the aperture is from the decreased amount of corner shading. The 14 L II delivers a smoothly transitioning but somewhat strong amount of shading in full frame corners when shot wide open. This is not unusual for a wide lens - and is mostly gone by f/5.6. Users of 1.6x FOVCF bodies will notice little or no vignetting.

Some flare is visible if the sun or another very bright light source is in the frame - otherwise it is well controlled. CA (Chromatic Aberration) is very well controlled, though you can see a little purple fringing in the corners with very high contrast subjects such as a white flag pole against a dark woods (more later). Distortion is also very well controlled. A small amount of barrel distortion is present at near minimum focus distances, but this distortion quickly diminishes to negligable amounts as focus distance is increased. Exposures are accurate, color and contrast are very nice.

Bokeh? Well, getting a background out of focus enough to qualify blur quality from this lens when stopped down is not easy to do - it takes a very close subject. If you can get one, you will see the results of a 6-bladed truly round aperture. I'm always skeptical of a 6-blade aperture, but the results I've seen have been nice.

This lens shows some coma. If shooting the night sky, the stars in the frame corners will turn into little flying saucer-like shapes.

I tested two new retail copies of this lens. As usual for my experiences with high quality lenses, both lenses performed very similarly. One was a tiny amount sharper in the center (the 1Ds Mark II ISO 12233 Chart 14mm II crops displayed are from this lens), the other was very slightly sharper in the corners. The differences were insignificant.

The 14 L II ships with a Canon LP1016 lens pouch. For better protection, consider the Lowepro Lens Case 1W. This lens is not compatible with extension tubes or Canon's 1.4x and 2.0x extenders.

The 14 L II's MFD (Minimum Focus Distance) is .7' (.2m) for a .15x MM (Maximum Magnification). This is plenty close enough for dramatic perspective distortion, but this is not a high magnification value. Even with a close subject, you need an interesting wide background for a pleasing shot.

From the comparison pictures, the Canon EF 14mm f/2.8L II USM Lens does not appear to be much different from the Canon EF 14mm f/2.8L I USM Lens. The two share a similar shape, size - and of course, convex-shaped objective element with a fixed metal lens hood. Upon closer inspection, some differences are visible. The first is weight - The 14mm II is 3.5 oz (85g) heavier than the 14mm I. The second is size - The 14mm II is .1" wider and .2" longer

These two small changes signal the bigger changes - those on the inside. The 14mm II "features completely redesigned optics including 2 high-precision Aspherical elements and two totally new UD-glass elements." [Canon] The optical performance difference between the 14mm I and 14mm II is very big. The 14mm II is sharper - much sharper in the corners. Just to be sure the ISO 12233 chart results from the 14mm I were correct, I re-tested it - with identical results. The 14mm II has much less vignetting - which also helps the corners a lot. The 14mm II has significantly less CA and less flare. The 14 II shows less barrel distortion. The 14mm I is not weather sealed. 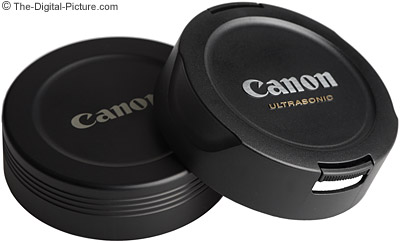 Back to the physical changes - The most obvious external change is in the lens cap. Protecting the convex objective lens element with a fixed hood requires a special cap. The 14mm I featured a very nice, solid metal cap (above left) that was poorly held in place by friction from the flocking on its inner sides. Mine was off as much as it was on - which put the lens at risk of being scratched by the cap if in a case. Canon has replaced this cap with a plastic one (above right) that pinch-clips into a new raised rib inside the metal hood (visible in the lens comparison pictures). Recessed areas on two sides of the cap direct the two clips onto the higher two lens hood petals. The high quality feel of the older metal cap is gone, but the functionality of the new cap is far superior. The new cap is also .6 oz (20g) lighter.

The Canon EF 16-35mm f/2.8L II USM Lens is another great ultra-wide angle EF lens. This was my primary UW prior to the Canon EF 14mm f/2.8L II USM Lens. While it may not be surprising that an L prime delivers better image quality than an L zoom, this was not the case with the Canon EF 14mm f/2.8L I USM Lens - the 16-35mm II was better. And while the 14mm L II has better image quality than the 16-35mm II at 16mm, it is not greatly better. These two lenses perform more similarly than different. 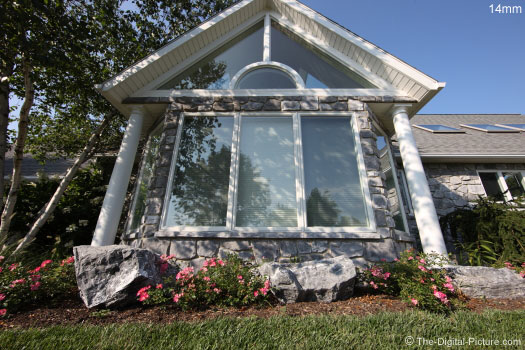 While both of these lenses have a front element that is shaped like a fish eye, only the 15mm delivers an image with this same look. The 14mm L II is the widest rectilinear EF lens - with an impressive 114° field of view. The 15mm Fisheye has a significantly wider 180° field of view, but it delivers a strongly barrel-distorted image. This image can be de-fished with software, though corner image quality is sacrificed in this process. Uncorrected, the fisheye look can get old if used too much (the primary reason I don't use this lens a lot). I do like the fisheye look when it is used sparingly. Note: The above comparison pictures were shot on a 1.3x FOVCF body - the A 14mm L I lens was used for this comparison.

I think you will find the following sample crop comparison useful. Use the mouseover feature on the following list of lenses to display the 100% crop from that particular lens. 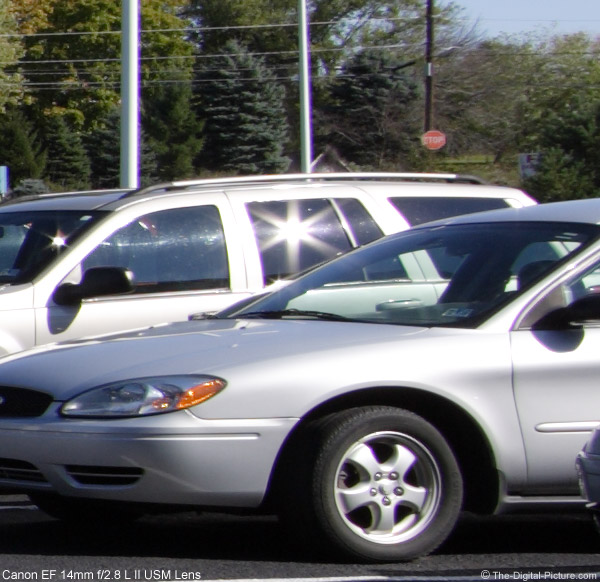 What you need to know about this comparison ... These Canon 1Ds Mark II crops are from about 60% through 80% of the distance from the center of the frame to the right edge. The 16-35mm II crop is closer to the right edge and the 15mm crop is closer to the center. This just happened to be the best comparable location in this particular shot. The car is relatively close, the right-most white light pole is a good distance away (and is the closest subject to the plane of focus) and the trees are much farther away. All lenses were focused on the same center-of-the-frame target.

To insure that vignetting and DOF were not issues for this comparison, f/11 was used. Images were shot as RAW and processed with the Neutral Picture Style and sharpening = 1 (very low - 2 would look noticeably sharper). Images were converted in DPP to 16-bit TIFF files, cropped in Photoshop and saved as 70 quality JPG files. The lighting was harsh mid-day sunlight on a clear day. Image sharpness and CA are especially easy to compare in these examples - look at the edges of the white light posts and at the car wheel. You can also see the effects of the 14 I's barrel distortion and the variation of focal lengths in the other lenses.

Those with an EF-S compatible EOS camera body have another option for their super-wide angle lens - the Canon EF-S 10-22mm f/3.5-4.5 USM Lens. While its varying aperture never gets as wide as the 14mm II's, the EF-S 10-22mm's focal length range goes much wider and is far more versatile. Use the mouseover below this picture to see the 10mm vs. 14mm difference ... 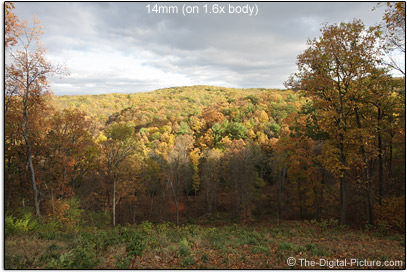 The more I use ultra-wide angle lenses, the more I like them. I find it especially challenging to compose a pleasing 14mm full frame image as this angle of view takes a lot in. Keeping track of all the angles and subjects in a full frame 14mm shot is not easy. Keeping your fingers, feet, shadow and tripod legs out of the frame is just one issue you face. This focal length is especially good at emphasizing a foreground subject against an interesting background. Take in a wide landscape, capture architecture - both interior and exterior, shoot in ultra-tight spaces ... When you get everything right, the result can be spectacular.

The Canon EF 14mm f/2.8L II USM Lens is so wide that getting adequate full frame flash coverage can be a problem. Expect to minimally need the built-in flip-down diffuser on an external flash. These flashes can also utilize a Sto-Fen Omni-Bounce Diffuser to yield complete flash coverage. Bouncing the flash is another method of covering the 14mm field of view.

The biggest downside to the Canon EF 14mm f/2.8L II USM Lens is perhaps the price tag. This is another case where you have to pay the price for the best.