The Canon EF 2x II Extender is an easy and very affordable way to dramatically extend the reach (focal length) of compatible Canon L Series lenses (and a few additional lenses). This review will sound very similar to the Canon 1.4x Extender Review, but the 2x function is basically the same.

The Canon EF 2x II Extender mounts between the compatible lens and body, and multiplies the focal length settings of your lens by 2. That's the good news - the bad news is the 2x decreases/narrows your lens' aperture setting by 2 stops. The lens aperture still opens to the same width, but the ratio of the aperture opening to the focal length is reduced - by 2 stops.

Extenders do not affect the MFD (Minimum Focus Distance) of the lens they are mounted behind, thus the MM (Maximum Magnification) of the lens is also multiplied by 2x. Do you need more macro magnification from your Canon EF 180mm f/3.5L Lens? Add the Canon EF 2x II Extender to the setup for a 360mm 2:1 Macro lens.

Because the Canon EF 2x II Extender is multiplying the aberrations/flaws of the lens it is mounted behind by 2x, there will be noticeable degradation in image quality when using the 2x. Sharpness and contrast take a hit with all but the best lenses. Additional CA (Chromatic Aberration) is introduced as is slight barrel distortion, but vignetting is somewhat reduced (only using the center of the image). The best 2x results will be made using a very sharp lens such as the Canon EF 300mm f/2.8L IS USM Lens.

Another negative aspect to shooting with the Canon EF 2x II Extender attached is the resulting reduction in autofocus speed. This can be an issue if you are shooting in low light and/or are using a lens that is not very fast focusing (such as the Canon 180 L lens mentioned above).

I'm not saying that you cannot USE apertures narrower than f/5.6 or f/8.0 while using the Canon 2x, but the lens + extender (with its 2 stop aperture loss) must be able to open up to at least these apertures for autofocus to work. The lens and extender combo can always be used in manual focus mode. A narrow maximum wide aperture creates a dark viewfinder that makes manual focusing even harder. Some people are reporting that the pins on the extender can be covered with tape to trick the camera into autofocusing. I doubt Canon condones this - I have not tried it.

The Canon EF 2x II Extender is relatively small and light. It is weather-sealed when used with similarly-sealed lenses and camera bodies. Build quality is excellent - Canon L Lens quality. 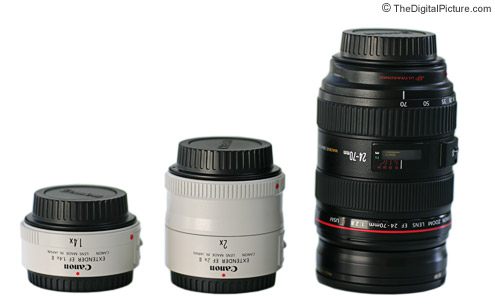 As a rule, but subject to change, the compatible lenses include fixed focal length L lenses 135mm and longer, zoom L lenses at least 70mm on their wide end and Canon TS-E Tilt-Shift lenses.

The 2x is also useful in creating a longer focal length lens than is available natively. For example, a Canon 600mm f/4L IS USM Lens + 2x results in a 1,200mm f/8 IS lens. Buying a 2x over a longer lens for financial reasons also makes sense.

To see examples of the image quality difference between a bare lens and a lens with the 2x attached, try the ISO 12233 resolution chart sample crop comparison tool. The link will set you up with an example mouse-over comparison, but you can select your own lenses and apertures to compare.

The Canon EF 2x II Extender - extending the reach of your very sharp and compatible Canon lenses for a low cost.