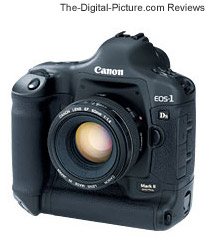 After spending a sum of money approaching 5 figures and waiting 3 months to get the 1Ds II, I had high expectations. And I am not disappointed. I have found no unexpected surprises - do not expect to find any - and should not find any for what this tool costs.

And for the most part, this is a good thing. Canon's 1-Series digital bodies are weather-resistant (when paired with a weather-resistant lens) and rugged. They are made to hold up to considerable and demanding use and in bad conditions. Though rugged, they have an attractive, modern design. Although some may disagree, I find the Canon 1-Series body very ergonomical. Although not light, the tactile feel and balance are excellent. The 1Ds II feels great in my hand. I find that some setting changes are not as intuitive and logical as I would prefer, but I have definitely acclimated to the functionality.

Of high importance to most of us - the Canon EOS-1Ds Mark II focuses very fast and accurately (at least when I do my part correctly) using a 45-point autofocus system including 7 cross-type sensors. According to Canon, the 1Ds Mark II focuses faster than its predecessor, the 1Ds, faster than the 1D and identical in speed to the 1D Mark II ... "Same One-Shot AF speed and AI SERVO AF subject tracking performance as the EOS-1D Mark II." (Canon) I personally have noticed no focus speed difference between the two mark II bodies. Canon also notes that "Because the AF unit is capable of operating at 8.5 frames-per-second and the 1Ds II has a maximum speed of 4 fps, the AI Servo AF algorithm has been optimized for 4 fps operation."

Of highest importance is image quality - I am also not disappointed in any way in this regard. I didn't find anything sacrificed in image quality to get the large 16.6 megapixel image. The sensor and the related software deliver the excellent image quality I expect from Canon Digital SLRs. Dynamic range is very good (non-officially rated at 9.5 f-stops), colors look natural. Auto white balance is very good (I am using it more often than ever).

1Ds Mark IIII sharpness is comparable to the Canon EOS-1D Mark II when the same number of pixels are covering the subject (pixel level sharpness). This is a good thing. Sharpness seems to be turned up slightly by default, but post-processing resulted in similarly sharp images even though the 1Ds II has a higher pixel density on the sensor. There was no question that the 1Ds II delivered far more resolution for a similarly cropped image. And of course, if you reduce the 3:2 aspect ratio 4992x3328 pixel 1Ds II image to a 1D Mark equivalent 3504x2336 pixel image and apply some sharpening, the 1DS II image easily wins.

What can you use 16.6 megapixels of resolution for? Huge prints for one thing. Think Billboards! The Canon 1Ds II's image also has lots of cropping headroom. Even after cropping an image significantly, enough resolution can be available for a large print. Or take several crop variations out of a single shot. For those times 16.6 megapixels are not needed, JPEGs can be shot at 8.6, 6.3 and 4.2 megapixels. RAW files can be processed to any desired size when using DPP (Digital Photo Pro).

Although one can never have too much resolution (in my opinion), there are downsides to this - such as the resulting image file size. 1Ds II .CR2 (raw) files average 13-16 MB (and like big, fast memory cards - a 2GB CF card formats to indicate 109 exposures available). High quality .JPG files are generally 5-8 MB, 16-bit .TIF files are 97 MB and 8-bit .TIF files are 48.7 MB. These numbers are about 2x larger than the same files from the Canon EOS-1D Mark II, which has about half as much resolution. Also averaging about 2x that of the 1D Mark II are the 1Ds Mark II's per image download (to PC) times (using a card reader) and the .CR2 processing times. I am not struggling with 16-bit image file load times or processing performance in Adobe Photoshop - I expected much worse.

The 1Ds II's FPS (frames per second) burst rate is slightly less than half that of the Canon EOS-1D Mark II (4 vs. 8.5). To hear the difference between 4 FPS and 8.5 FPS, select each of the following sound clips.

The 8.5 FPS specification of the 1D Mark II will be the deciding factor for many sports and other fast-action photographers. The 1Ds Mark II can shoot a burst of 32 JPEGs or 11 RAW frames before filling the buffer. The single frame shutter/mirror sound of the 1Ds II also differs from the 1D Mark II - It is a bit more drawn-out.

One of the Canon EOS-1Ds Mark II's most sought after features is the 1.0x full frame 36mm x 24mm sensor. The large viewfinder that comes with it is very nice. Wide angle lenses are very wide and very long lenses are required to fill the frame with small or distant subjects. But, the 1Ds II stretches even the best lenses to their limits. Even some of the best lenses show vignetting and distortion with a wide open aperture at their shortest focal length. And, the shorter DOF (Depth of Field) for similarly-framed subjects (compared to a 1.3x or 1.6x FOVCF camera) can be good or bad. Read the Field of View Crop Factor Explanation for more information on this feature.

The 1Ds II's higher pixel density (than the 1D Mark II) will be welcomed by those who crave more focal length or magnification. Although cropping may be required to get the framing right, more detail can be captured within the same framing and using the same focal length lens as the 1D Mark II. Higher pixel density often means more noise in the image, but the 1Ds II handles this very well in my opinion.

The above ISO noise sample 100% crops are from a neutral color block that typically shows ISO noise well. These samples were taken in bright sunlight. Because ISO noise tends to be higher in the blue channel, you might experience more ISO noise under red-colored lighting (incandescent for example). At the same time, you might notice less noise in less-neutral colored subjects.

The above graphic above illustrates the ISO 1600 noise from the 1Ds II (top) the Canon EOS-1D Mark II (bottom). Although it may not qualify for a "scientifically exact" comparison, it represents what I am seeing in side by side comparisons. These are 100% crops. Canon confirms that the two mark II bodies produce the "same low noise ..." If you don't need the full 16.6 megapixels of resolution for a specific high ISO image, you can reduce the size of the 1Ds Mark II image to reduce the noise appearance slightly. The bottom line - both DSLRs perform very well even at ISO 1600 - and any differences are insignificant to me. 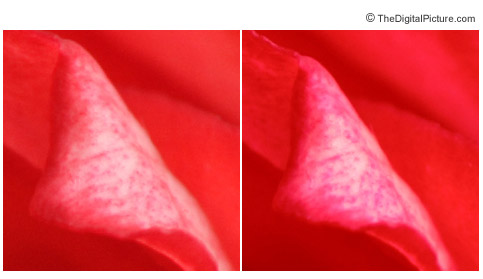 The above image is an intentionally and significantly overexposed 100% crop comparison from the 1Ds II (left) and the 1D Mark II (right) to show how the 1D Mark II does not handle over-exposed red subjects well (becoming bright pink - not enough green, too much blue). The 1DS Mark II handles this situation more gracefully. In reality, I seldom saw the overexposed reds in my 1D Mark II shots, but its nice to know the problem is gone. Canon - How about a firmware update for the Canon EOS-1D Mark II?

As the same tripod-mounted lens was used for each of the above shots, the 1DS Mark II's higher pixel density I referred to above is also apparent. Do not use these clips to compare sharpness as this was the most dramatically differently colored section of the rose - not the focus point.

The 1Ds II powers on nearly instantly (.3 seconds vs. .5 seconds for the 1D Mark II and .6 seconds for the 1Ds) and is very responsive (setting changes, menu navigation ...). Battery life is exceptional - plan on 1,200 or so shots from a fully charged Canon NP-E3 Battery Pack.

Like the 1D II, the 1Ds II uses both CF and SD memory cards, each in their own slot. Simultaneous recording to both cards is available for redundancy purposes. I found the 128MB SD card and 256MB CF card pictured in Canon's white paper (below) humorous - 12 and 24 exposure rolls of film come to my mind. :)

Because of their near-identical features and functions, many photographers will choose to have both the 1Ds II and the 1D Mark II in their kit. There is basically no retraining or learning curve when switching bodies. After using the 1D Mark II for nearly a year, I could immediately use the 1Ds Mark II.

As I noted in my Canon EOS-1D Mark II Review, I found the very different landscape vs. portrait shutter release sensitivities very annoying. I also noted that Canon seems to have fixed that problem in later-produced 1D Mark II models. I am happy to report that the 2 shutter releases on my 1Ds II have sensitivities that are identical to each other.

I'll leave you with 1 final 1Ds II design change from the 1D Mark II - the "Ds" and "Mark II DIGITAL" nameplates are now gold plated. I doubt this change will help you get better images, but at least you can look good!

Picking up a new Digital SLR means a lot of work to me as I strive to find the best post-processing workflow. Maybe I'm just getting smarter, but Canon's DPP (Digital Photo Pro - included) is giving me better results than EVU (EOS Viewer Utility - also included). I found DPP to give me harsher looking results in the past, but EVU seems to be smoothing away some of the detail of the 1DS Mark II images. I've always liked the functionality of DPP better than EVU, but felt that EVU gave me the best end result. Regardless of how I got here, DPP is the RIC (Raw Image Converter) I am currently using for my 1Ds II file processing.

The bottom line - The 1Ds II has arguably the highest image quality of any currently available Digital SLR. Outstanding resolution from a rugged Digital SLR that feels great in my hand, the 1Ds II delivers. I found not much to not like - other than the price - and the large file size required by the 16.6 megapixel images.

If 8 megapixels of resolution is enough for you and available lenses on a 1.3x FOVCF (Field of View Crop Factor) body are wide enough for you, the Canon EOS-1D Mark II is probably the right choice for you - I highly recommend it as well. And you can have two for the same price as a 1Ds Mark II.

If you can spare the high frame rate and the cash, the Canon EOS-1Ds Mark II will give you excellent high resolution images (if you do your part of course). I highly recommend it.

If you are not sure which Mark II is for you, the white paper link in the "More Info" section below has some great information in it (dial-up users be warned - it is a large file).