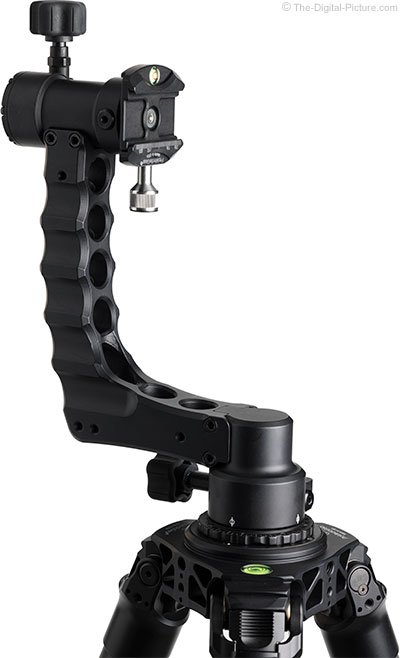 ProMediaGear sent me the ultra-solid TR424/TR424L Pro-Stix Carbon Fiber Tripod for testing the Canon RF 800mm F5.6 and RF 1200mm F8 L IS USM Lenses. Still, a tripod head was needed, and it seemed logical to test a ProMediaGear brand head on their tripod.

Gimbal mounts make large lenses effortless to use, and I migrated to side-mount gimbal versions for their rigidity and reduced weight. The heavy-duty GKC Katana Gimbal Head and the smaller, lighter, and less expensive GKJRC Katana Pro Gimbal Head were the ProMediaGear side mount options. Since I was reviewing one head, I opted to borrow and review both.

This page is about the GKC Katana Gimbal Head. Like most other ProMediaGear products, the GKC Katana Head is a work of art yet extremely well constructed. 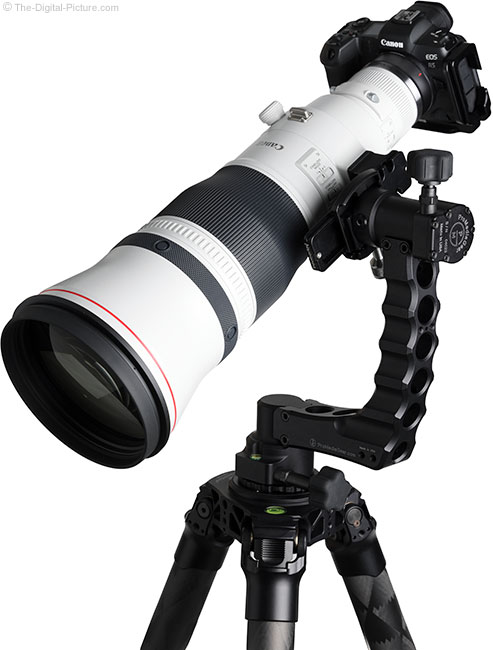 What is a gimbal head, and why should I use one?

To begin to answer this question, let's get a definition of gimbal: "A gimbal is a pivoted support that allows the rotation of an object about a single axis." [Wikipedia] From a photography point of view, that object is a camera and lens combination, and the head part of the subject indicates that the gimbal is made to be mounted on a support, most typically a tripod or monopod.

Why use a gimbal head? Controlling a large lens mounted over a ball head or similar mount is challenging and risk-filled. Gravity is always trying to pull your top-heavy ball head-mounted camera and large lens setup to the ground while you fight to maintain control over the rig.

"Ball flop" is a painful term derived from this experience going bad, typically involving a camera and lens tipping over, impacting the tripod hard, and potentially knocking the entire tripod over, resulting in everything crashing to the ground. To answer a question that might have arisen, yes, this has happened to me. I caught a 500mm f/4 lens and Canon 1-Series body with my foot just before they hit the ground. That experience is scarring enough that a second occurrence does not happen.

A properly adjusted gimbal mount places the weight of the balanced camera and lens at (or below with a full gimbal) its pivot point with gravity not influencing the rig's position. This setup leaves a heavy lens and camera body practically weightless to the photographer. Only two fingers are needed to orient even a pro body with a big Canon RF 600mm F4 L IS USM Lens.

Once leveled, always leveled. One of the benefits of two-way-adjustable gimbal heads is that when the tripod is level and the tripod collar is locked in a level vertical or horizontal position, the camera will always be level. This attribute frees the photographer to follow their subject on the ground, flying, etc., without concern for levelness. Note that a leveling base makes leveling the tripod considerably faster.

While gimbal mounts are practically requisite for large lenses, they work very well with smaller ones for the same reasons. Gimbal heads are a joy to use, especially when following an in-motion subject. 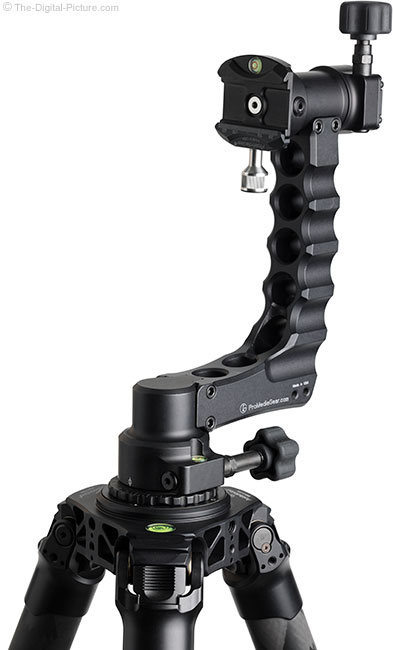 "The ProMediaGear Katana is capable of supporting up to 150 lbs of equipment." [ProMediaGear]

If you've read any of the site's other ProMediaGear reviews, you know about their no-compromise design consistency, and the GKC Katana Head design features that aspect. This gimbal head is large, heavy, and absolutely solid.

The one-piece chassis is machined from solid aluminum, with large machined holes and radiuses for reduced weight. The design looks awesome, though it is not especially comfortable from a carry perspective.

Eight useful 1/4"x20 threaded inserts are provided on the chassis, making the attachment of a wide array of accessories easy.

At the bottom, the chassis is bolted to the substantially-sized panning base. The panning base features a bubble level (especially useful on leveling bases lacking such) and indexing.

At the top, the chassis is bolted to the Arca-swiss compatible quick-release clamp rotating mechanism.

The large, soft-grip rubber over-molded panning base and rotating clamp adjustment knobs are comfortable to use and conveniently located. The lobed knobs facilitate applying significant torque. While the locking knobs are not captive, enough rotations are required for inadvertent removal to be unlikely.

A shortcoming of the GKC Katana's locking mechanisms is composition shift. Tightening the clamp rotation lock directs the lens downward, and tightening the panning base lock shifts the lens to the left. Loosening the knobs has the opposite effect. The composition shift aspect will challenge those shooting with the movements locked into place but will have no impact on those photographing with movement enabled.

The head can be used on the left side of the camera with the left hand resting on the head, directing the setup. Alternatively, mounting the head on the right side of the lens clears the camera and lens for two-handed use, similar to handholding. Both options work very well. 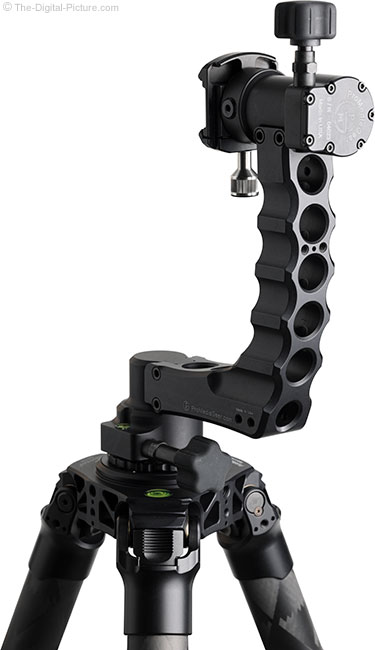 The above dimensions include locking knobs.

With approximately 10.5" (267mm) from the bottom of the base to the center of the clamp, the GKC Katana effectively makes your tripod taller, including the minimum height. This height also mechanically facilitates shooting at a strong upward angle. 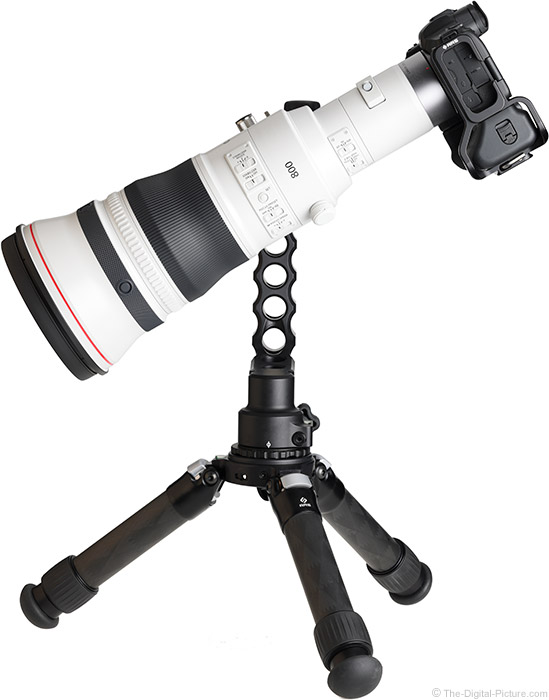 As mentioned, this is a large, heavy head. I spent a few hours hiking a shoreline with the GKC Katana on a PMG TR424L and a Canon RF 800mm F5.6 L IS USM Lens on an EOS R5. While the setup was heavy, it was still easily manageable. 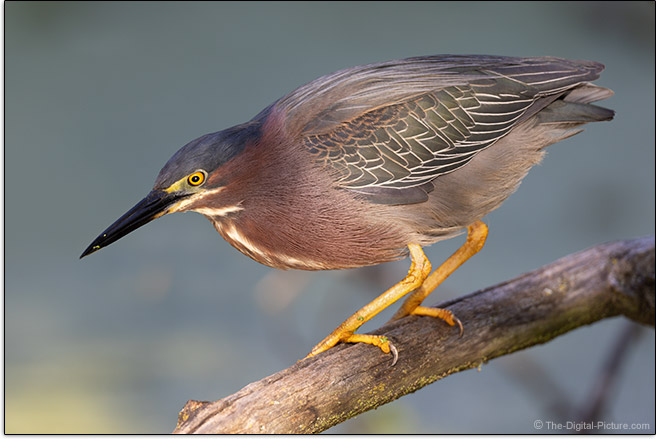 The generous limited 5-year warranty reflects this USA manufacturer's trust in the product.

This head is primarily meant for use with lenses that have tripod mount feet. For attachment to the clamp, tripod feet require an Arca Swiss-compatible dovetail, either built-in from the factory, added via a replacement foot (recommended – Wimberley's are great), or added via a lens plate.

At review time, ProMediaGear includes their PX6 Lens Plate in the box.

On the ProMediaGear TR424L Pro-Stix Carbon Fiber Tripod, the locked GKC Katana Gimbal Head stabilized a firm tap to the side of the camera with a Canon RF 600mm F4 L IS USM Lens mounted in under 2 seconds.

That is outstanding performance.

This extreme rigidity is not as important when gimbal mounts are being used with loosened knobs to enable tracking action, but sometimes a completely locked down head is required. For example, when photographing an owl sitting in a distant tree cavity on a windy day, the rigidity of the mount can make or break the shot. When the load is especially heavy, the extreme strength avoids flex even with the movements loosened. 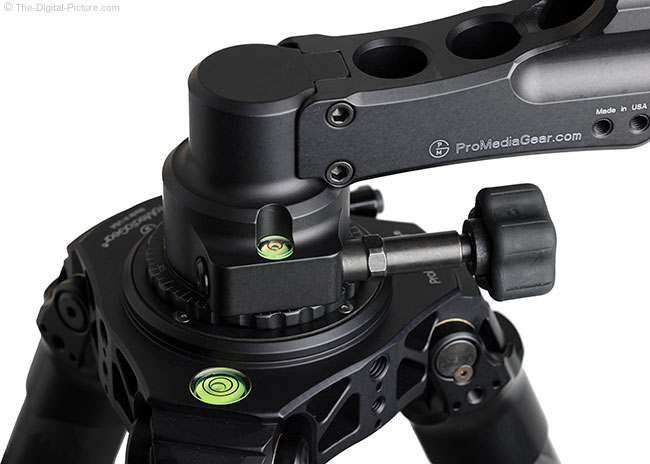 What are the advantages and disadvantages of the side mount?

What are the advantages of the side mount gimbal head?

This vibration difference will not be significant with moving subjects. Still, it could be a factor with more-stationary subjects (such as the moon) and when photographing in the wind. That said, these heads are both so strong that the point becomes a minor one with the usual wildlife photographer camera loads.

OK, so what are the advantages of a full gimbal mount? 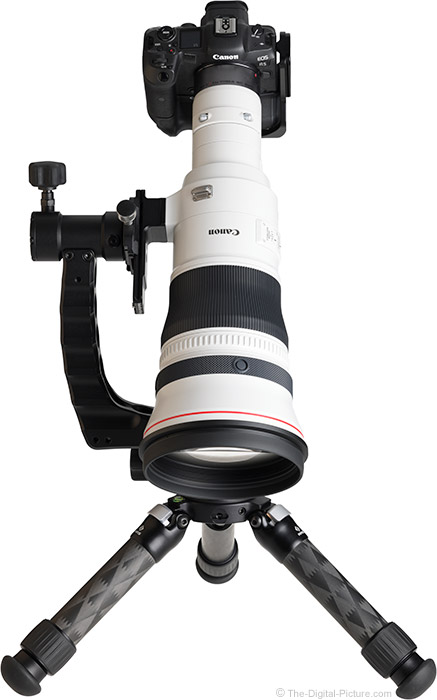 Because the side mount gimbal head does not provide side-to-side adjustment, perfect centered alignment of the lens over the panning base requires a precise distance from the lens collar's foot. The Canon RF 600mm F4 L IS USM Lens with a Wimberley AP-600 Replacement Foot aligns about 0.5" (13mm) past the center. My take is that non-centeredness makes little or no difference in perceived functionality.

Side mounting the camera (without a collared lens) requires an L-bracket for portrait orientation and minimally a base plate for vertical compositions, which results in the lock lever being positioned to the right of the camera (or the shutter release on the bottom). Cradle-mounting a camera body requires an RRS MPR-CL II, a Wimberley Perpendicular Plate, or similar, along with, minimally, a camera base plate for horizontal composition and an L-plate for vertical composition. The MPR-CL II or similar is required to balance an otherwise front-heavy camera-mounted setup. That was a lot of words to say that the side-mount has an advantage for direct camera mounting but not a big one.

Should I Get the ProMediaGear GKJRC Katana or GKC Katana?

If you want the absolute strongest, most-rigid gimbal tripod head available, have extreme loads to mount, expect to shoot in strong winds, or don't mind the heavy weight and large size, the GKC Katana has your name on it.

Otherwise, the GKJRC is considerably smaller, lighter, and less expensive while still handling far more weight than most photographers intend to mount. If you are not sure which head is best for you, try the GKJRC first.

The ProMediaGear GKC Katana ships in a microfiber-like drawstring bag. This bag will help avoid scratches, but impact protection is not provided. That said, the biggest impact risk is to anything that comes into contact with this rugged head.

The GKC Katana is a large, heavy gimbal head that is rock solid even when extreme loads are mounted. This head's primary downside is the point of aim shift during lockdown. Otherwise, this head is a dream to use, providing extremely smooth movements that make using large, heavy lenses easy.

The price tag reflects a high-quality product that is expected to last indefinitely.

The reviewed head was on loan from ProMediaGear.