Mercury Transit of the Sun 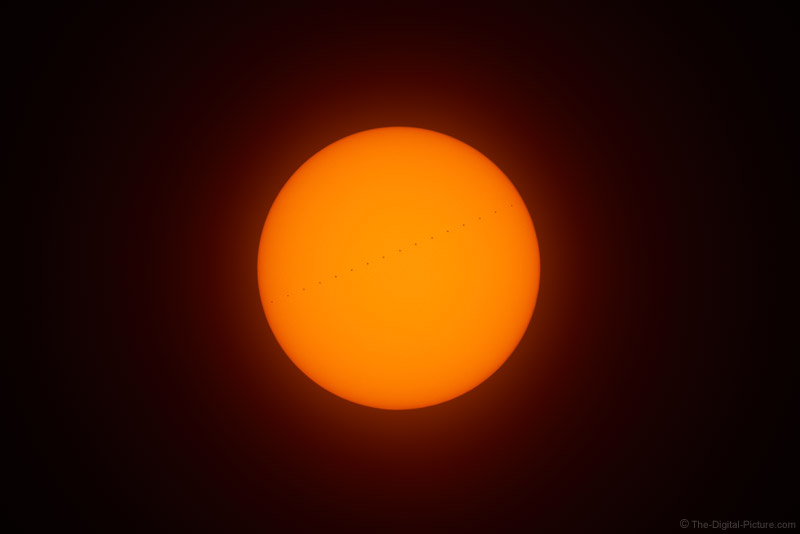 Smart people told us long in advance that the planet Mercury was going to pass in front of the Sun for many hours on 11/11/2019 and that the transit was going to be visible across a huge swath of the world, including my location on that date, falling during my Shenandoah National Park Workshop.

My first thought regarding photographing this event was that I could take a picture of the Sun anytime and simply use the paint brush tool to drop in Mercury planets wherever desired. While the result would look fine, it wouldn't be nearly as fun or as phsychologically rewarding as experiencing the event firsthand and capturing the real thing. Photographing the Sun is easy and a little black dot in front of it was going to be equally easy to capture so, I packed the required solar filter for the trip.

The Sun was not going to be our primary subject on this day, we didn't have time to shoot throughout the entire many-hour transit, and the cloudy sky made photographing it challenging during the few times we attempted to do so. Still, I wanted to show the entire transit in the final result. To fulfill that goal, I pieced a number of images together and then duplicated a Mercury planet to fill in the entire path across the Sun.

While the Mercury transit does not rise to the level of amazing as the recent solar eclipse, it was still fun to see and photograph.

When photographing the Sun, everything else in the frame is black unless there are clouds being brightly lit while darkening the Sun enough to even out the dynamic range. With black periphery being easy to create during post processing, framing the Sun a tightly as possible becomes the goal. Still, the Sun will not come close to filling the frame even at 1200mm, the longest most photographers will use, on a full frame camera. In a focal length limited scenario, higher pixel density on the imaging sensor means more resolution remaining after cropping and the Sony a7R IV has that. The Sony FE 600mm f/4 GM OSS Lens and FE 2x Teleconverter were used to gain the 1200mm focal length.

Among the many images captured were some with a cloud-caused fiery haze surrounding the Sun. Adding some of these images into the Photoshop stack provided the option of including the haze in the final image as shared here.

Here is a question for you: Since I watched Mercury transit the Sun in an electronic viewfinder, did I really see it?