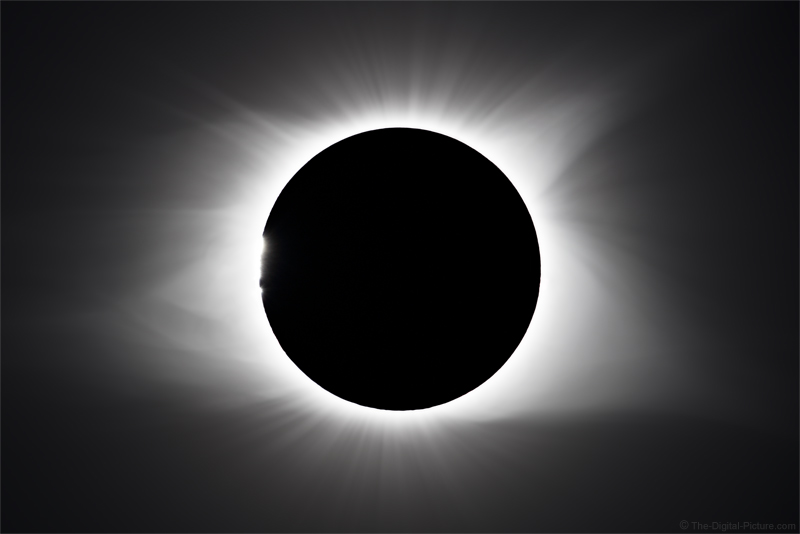 Like scores of others, you (probably) and I photographed the solar eclipse this year. While partial solar eclipse images are easy to process (simply make them bright without blowing the red channel), the total eclipse images when bracketed, are in a different league in terms of complexity. So, like me, you are probably now asking, "How do I process the exposure-bracketed total eclipse pictures?" While there were many articles teaching us how to photograph the eclipse, those telling us how to process the images we captured during totality are scarce.

A great solar eclipse photography strategy is to extensively bracket exposures during totality, when the corona becomes visible. While the corona is relatively bright just outside the edges of the moon, it becomes very dim far away from the sun. Of course, with the sun being 93 million miles away, the word "far" takes on a significant meaning.

While I hoped I could simply load a set of bracketed-exposure images into my favorite HDR software (Photomatix or Photoshop) and be finished, the results returned were not acceptable to me for a couple of reasons. The primary problem was that the software did not properly align the moon (it moves across the frame in subsequent images), creating ghosting and still did so even if I pre-aligned the moon in each image. I could have overlaid the moon from a single frame, but ... I still wasn't satisfied with the overall look of the results.

In the end, after numerous trial and error attempts, I settled on an easy, relatively fast way to merge the results in Photoshop as my solution. Note that there are many techniques that can be used to process a stack of bracketed total solar eclipse images, so don't think this is the only option. But, this technique is easy and it produces a nice result.

Hopefully you captured your images in RAW format for the highest quality and in that case, processing those RAW files into 16-bit TIFF format is the first step needed.

Next, the images need to be loaded into layers in Photoshop. I use Adobe Bridge for this task, browsing to the folder the files are located in, clicking on the first of the series and shift-clicking on the last to select them all. Then select the "Tools" menu, "Photoshop", "Load files into Photoshop Layers ..." and a new Photoshop document will open with all of the images stacked in layers.

Unless you were using a tracking mount, the moon disk will need to be aligned in the layers. I simply moved each layer into identical position. Click on the layer and move it using the move tool. Toggle layer visibility of the image containing the targeted moon position for use as a guide and use the arrow keys to slide the layer being adjusted into position.

Once the images are properly aligned, crop the image as desired. Trimming away the missing edges and centering the sun was my decision.

Select the first/top layer and shift-click on the second-to-last layer. With all except one layer selected, reduce the layer opacity using the "Opacity" box at the top of the layers palette. Try starting at 20% and adjust to taste from there. I suggest keeping the image on the bright side at this point.

Making the opacity adjustment (likely) immediately produced an image that looks decent, but one ready for some contrast adjustment. Click on the top layer and create a new adjustment layer. The adjustment layer type you should select depends on your Photoshop skill level, but it needs to be a contrast-adjusting layer type that you are comfortable with, curves being the most powerful and levels being very easy. Use the adjustments the selected tool offers to bring life into the image. If using curves, try selecting two points to create an S-curve that darkens the darks colors and brightens the light (though likely only slight brightening is needed if the layer opacities were set low enough). If using levels, try reducing the mid adjustment slider. You may find that adding multiple adjustment layers is helpful. The beauty of adjustment layers is that they are non-destructive and can be created or deleted at any time.

Because the edges of the moon become brighter as the exposure becomes increases, the edges of my moon were not as crisp as I liked. Also, Baily's Beads were one of my favorite aspects for the solar eclipse and they were only found in the images captured just before C2 and just before C3. So, I incorporated an additional layer into the top of my layer stack and used a layer mask to make only the lunar disk and Baily's Beads visible. This means a black mask (use CTRL-I with a newly-created mask selected), with the desired visible attributes painted white (I used the paint brush). Another option for sharpening the moon is to duplicate one of the existing layers (CTRL-J), likely a darker one, giving it a 100% opacity and a layer mask with only the lunar disk made visible.

A technique that can be used to bring out some contrast in the corona is via Photoshop's High Pass filter. There are a number of ways to do this, but here is one of them:

Select and combine all layers by clicking on the topmost layer, shift-clicking on the last and pressing CTRL-E. Then copy the combined layers to the clipboard by press CTRL-A to select the entire image and then pressing CTRL-C to copy it. Next, undo changes until one step back past the layer-combining step. Select the top layer and press CTRL-V to paste in the copied combined layer.

With the new layer selected, desaturate it by pressing CTRL-SHFT-U. Implement the High Pass filter selecting from the menu: "Filter" > "Other" > "High Pass...". From the High Pass filter dialog, adjust the radius until it seems like the results will work well, with a low value being good for sharpening hard edges such as the border of the moon and a high value being good for adjusting overall image contrast, such as the corona.

Adjust individual or smaller groups of layer opacities is another step that can be taken to optimize the final appearance.

For the total solar eclipse HDR image shown here, I combined eight 1-stop-bracketed exposures (out of 14 captured) using opacity values of 100% on the bottom (the brightest frame), 25% for the next three up, 20% for the next three up and 30% for the darkest layer on top. The top layer has a layer mask that allows only the center of this frame to show with a strongly-feathered border creating a natural transition to the layer below (one click in the center with a very large, totally-soft paint brush tool selected).

With so many options available, you may decide it worthwhile to create multiple versions of your HDR image and that is a great idea. You worked hard to prepare for and capture the solar eclipse, so having multiple images processed differently simply increases the reward.