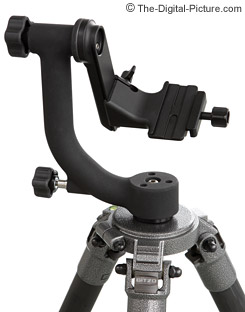 When properly mounted on the Tripod Head II, a heavy lens and camera body become nearly weightless to the photographer. Only two fingers are needed to move a setup such as the Canon EF 400mm f/2.8 L IS II Lens mounted on a large camera body into position.

Gimbal tripod heads such as the Wimberley Tripod Head II place the weight of the lens/camera setup below their pivot point. Thus, gravity pulls the setup into a level position. On the other hand, gravity attempts to cause the same camera/lens to flop over when mounted on a non-gimbal tripod head.

Yes, many of the best non-gimbal heads (such as the Arca-Swiss Z1 are rated for far more weight than my example lenses above. And they really can support the weight. But, you must fight against gravity when making adjustments. And if you don't get everything tight, the lens can flop over into the tripod - with the potential for costly damage. And hold on tight if you are going to leave the mount loose for panning. 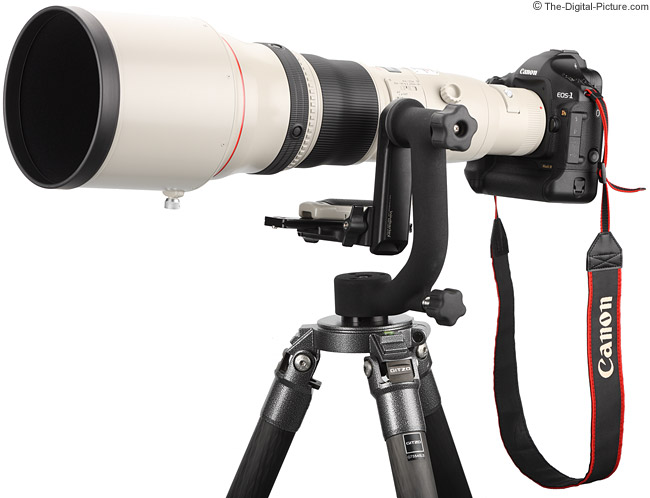 The above image shows a Canon EF 800mm f/5.6 L IS USM Lens mounted on a Canon EOS-1Ds Mark III camera body - a combination perfectly suited for the Wimberley Tripod Head II they are mounted to.

The Wimberley Sidekick is a less-expensive gimbal head solution that can handle lenses up to including the Canon EF 500mm f/4 L IS Lens. The Sidekick is smaller and is more convenient to pack along with your normal ball head, but the Tripod Head II is a nicer solution.

The Wimberley Head has four adjustment knobs. Two of these are used to setup the lens/body combo (they remain tight during use) and two are used for adjustments during use. The pan locking knob controls the panoramic rotation friction. The top/side knob controls the elevation adjustment friction. Another knob allows adjustment of the platform elevation (moves the mounting clamp up/down in relation to the elevation pivot point). The last friction knob is on the integrated industry-standard-sized quick release clamp.

To setup the Tripod Head II ... After unscrewing the normal ball head (if you don't have the luxury of a dedicated tripod), the Tripod Head II screws onto the tripod legs in its place. The base/bottom friction control knob must be firmly tightened for this step. With the tripod approximately leveled, the platform elevation knob very tight and the elevation friction knob very slightly loosened, the lens plate on the tripod collar is gently placed into the clamp and adjusted forward/backward until the setup is balanced. The clamp is then tightened. Do not let go of the lens until the clamp is tight and the entire setup is balanced. 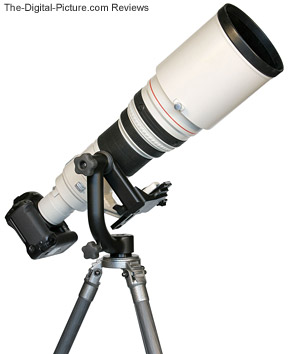 The above picture shows a Canon EF 600mm f/4 L IS Lens mounted on the Tripod Head II.

During use, the two larger/rubberized knobs controlling panoramic and elevation friction are loosened/tightened as desired. The tripod collar friction knob is used to control camera orientation (the third dimension). Many times all three can remain loose during use (after setup). This allows a subject to be followed - or framed quickly. And the lens stays basically in place when you let go.

Transporting of such a setup typically involves tightening all friction knobs and putting the entire rig over your shoulder.

A camera and lens combination without a tripod ring can be attached to the Wimberley Tripod Head II, but Wimberley Perpendicular Plate is needed to allow the mount to work properly. This is not an elegant solution, but can eliminate the need to carry an extra tripod head.

Real use functionality of the Wimberley Tripod Head II is excellent. Two fingers can easily position a huge lens on your subject - and follow it. I highly recommend the Tripod Head II when using a lens the size of a 300mm f/2.8 or larger. 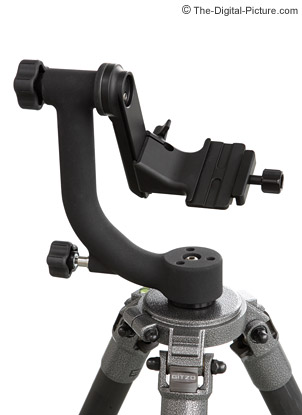 My favorite change - and the one most immediately noticeable is the smaller size of the Wimberley Tripod Head II. Compared to the version 1 head, the Tripod Head II is ...

The pan locking knob has been moved to the side - it is much easier access now. No longer must you reach under the lens platform (scraping you knuckles) to adjust rotation friction.

The distance from the mounting surface of the platform to the tilt axis remains adjustable (from 1.1" to 4.8"/28mm to 122mm), but the arca-swiss standard lens clamp is now built into the lens platform.

The Tripod Head II's finish is coarse and matte. I'm not sure I like the new finish over the smoother finish on the original head (it shows marks from anything that touches it) but it does not reflect light - and this is an important attribute when photographing wildlife.

To be honest, I was skeptical that a new version of the Wimberley Head would be worth an upgrade for me. But I am impressed at the changes Wimberley has made. The Wimberley Tripod Head II is a far more elegant solution to the problem solved so well by the original Wimberley Head. I have upgraded my kit with no regrets.

Rent Now  ►
My Recommended Wimberley WH-200 Gimbal Tripod Head II Retailers Where you buy your gear matters. You expect to get what you ordered, and you want to pay a low price for it. The retailers I recommend below are the ones I trust for my purchases. Get your Wimberley WH-200 Gimbal Tripod Head II now!
B&H Photo
Adorama
Amazon.com
(Using the links on this site to make any purchase provides support for this site)

Rent the Wimberley WH-200 Gimbal Tripod Head II Do you need/want the Wimberley WH-200 Gimbal Tripod Head II for only a short period of time? Or, would you feel more comfortable buying after having a hands-on trial period? Consider renting. Renting is fast and easy. The rental companies I recommend below are excellent to work with. Schedule your rental now!
LensRentals.com
(Using these links for your rental supports this site)
The Tip Jar