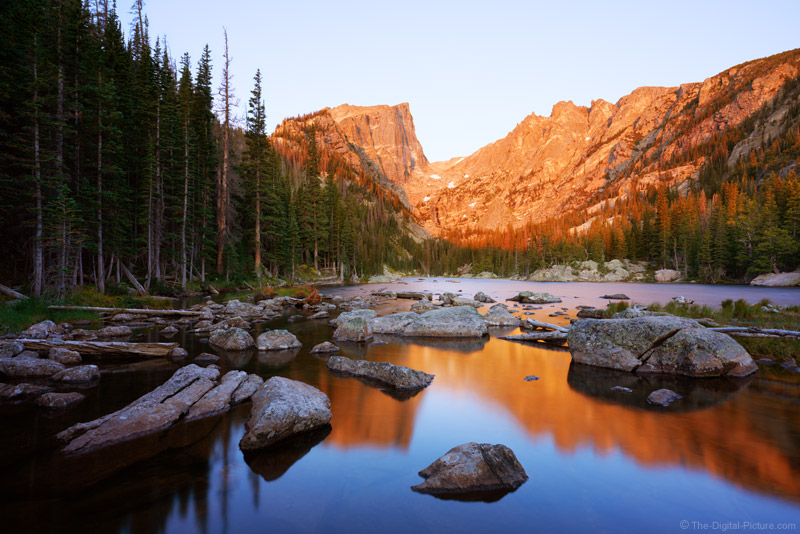 On this day's schedule was giving some great gear a workout and the Sony a7R IV and Tamron 17-28mm f/2.8 Di III RXD Lens combination were chosen. These were packed in MindShift Gear BackLight 18L along with a Really Right Stuff TVC-24L Mk2 Carbon Fiber Tripod with a BH-40 Ball Head mounted and the very early AM hike to Dream Lake ensued.

I don't like to be the second person at a popular location and some may say that I arrived too early for this one. The extra time ensures adequate setup time with some starry sky photography included. The extra time also means that very warm clothes were needed, especially with the wind often encountered here.

I love perfectly still water surfaces in the shade and the mirror reflections those surfaces create. This morning did not provide such and the mentioned wind was relentless.

Between reviewing long exposure, high ISO image captures and the light becoming bright enough for the foreground rocks to be visible, this composition was settled on. I wanted the closest round rock centered between the mountain peak reflections with a clean border around it and the other foreground rocks. The camera was leveled for both roll and pitch. I seldom want a camera that is not leveled for roll when photographing landscape and in this case, I also chose to avoid an upward or downward camera angle that would have caused the straight tree trunks to tilt inward or outward respectively. The focal length was selected to be inclusive or exclusive of details in the scene and the camera height was selected for the final composition. The color balance disparity of the warm first light of the day hitting the mountain mixed with cool shade in the valley below is natural and I love it.

The final image is the result of combining two images using manual HDR blending. As is often the case, those exposures were different with the sunlit areas captured darker (f/11, 0.4 seconds, ISO 100) and the shaded areas coming from brighter settings (f/11, 30 seconds, ISO 200).

As you likely noticed, the longer exposure is dramatically longer and includes a 2x-brighter ISO setting. This exposure was needed to compensate for a 6-stop Breakthrough Photography X4 ND filter (great gift idea) being used. The longer exposure this filter permitted allowed the water to be smoothed, averaging out the reflection details in the lake surface ripples, giving the mountain reflections some definition. A third image (another darker one) was pulled in because some of the trees were less motion-blurred than in the primary image.

The aforementioned gear all performed excellently. It was a superb choice for this event. Of course, the bottom line is that Dream Lake and its rocks rock!