Natural-Looking HDR Images Can be Easy to Create

The HDR (High Dynamic Range) image processing technique makes use of multiple images captured (or minimally, processed) at different brightness levels to avoid detail-less blown highlights (RGB values of 255,255,255) and blocked shadows (RGB values of 0,0,0) in the properly-adjusted final merged/blended/composited image. That sentence sounds complicated, but hang with me – the process does not have to be.

Cameras are limited in their ability to capture detail in extreme wide ranges of brightness. Scenes that present a dynamic range beyond what the camera can handle are begging to be HDR'd. For HDR use, capture one frame exposed for the bright areas and one frame for the dark areas. Frames covering additional brightness levels can also be captured if necessary – or for insurance.

Sorry, but I need to say it up front: If it is obvious that you used an HDR technique for your image, I'm probably not going to like the image very much. Many HDR images being produced today look un-natural and many even look cartoonish. While the look is fine for artistic uses (and I do like that look for some purposes), I am going for the natural look most of the time.

HDR images look very difficult to create, and while some can be intensely so, great looking HDR images can also be very easy to create.

To get started with HDR processing, you need to pick the subject and take the pictures. Because the multiple images must align perfectly, tripod-based shooting is very strongly recommended. Some applications can align multiple handheld shots, but do so with a potential loss of resolution.

Capture enough exposure variations of the scene to give you plenty of options to work with. The brightest image should have adequate shadow detail in the darkest portion of the image and the darkest needs to have adequate highlight detail in the brightest portion. Two exposures varied by 1 to 3 stops are often adequate for HDR processing, but sometimes additional exposures are helpful.

My example subject is Barnegat Bay and a Hurricane Sandy-ravaged pier in Seaside Park, NJ. The setting sun was delivering a very bright sky while the pier and other foreground elements were quite dark.

In this example, I took the HDR technique a step further. Because a longer exposure would add a motion blur effect to the water and because I had plenty of highlight headroom in that portion of the frame, I opted to significantly overexpose this image. The brightest portion of the water was approaching a blown highlight brightness.

Here are my base images along with the 2-stop reduced version of the plus-4-stop image. And I'll jump ahead by showing you a pair of finished HDR images to share the target of this processing. 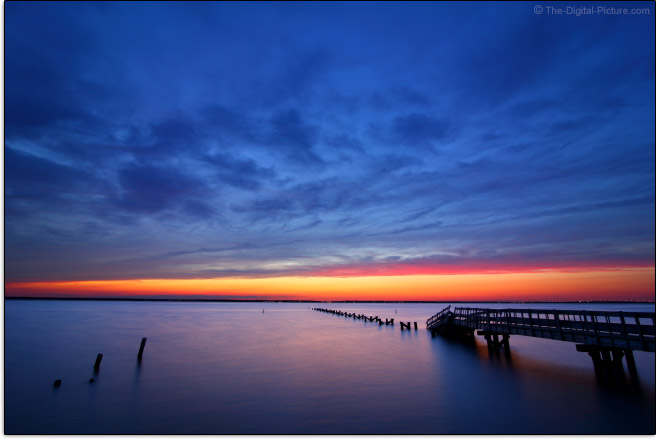 The properly exposed image was captured at 1.3 seconds at f/11. The +4 stops exposure was captured at 20 seconds (again at f/11). Twenty seconds was long enough to create a strong blur in the water but not too long that the brightest portion of the water would be overexposed. I reduced this image by two stops in Canon's Digital Photo Pro.

HDR processing of course requires imaging software. Canon's Digital Photo Pro, Photoshop and MANY other software applications including many HDR-dedicated applications are available with the HDR feature. But, I'm not going to use a prescribed HDR feature. Instead, I am going to use layers. You simply need an application that supports layers (DPP does not).

Photoshop is the famous image editing option that includes layers and is what I'm going to use in this example. 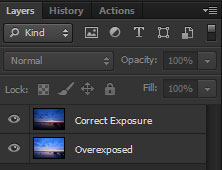 Load your images into layers in your application as shown above. To make this process easy, I use Adobe Bridge to select my images and then use the "Tools/Photoshop/Load Files into Photoshop Layers" menu option.

What gets masked and how you mask it can vary dramatically from image to image, but a hard brush edge usually requires a hard transition between the layers to work properly. More frequently, a large brush with a very soft edge will best hide transitions between the layers. The soft-edge brush provides an effect more closely resembling the effect of a graduated neutral density filter, but with vastly greater control.

When a very large portion of the frame needs to be made transparent, I typically use the marquise tool to select that area and then simply hit the delete key (with the color black selected). I nearly always follow up that action with the brush tool to refine the edges of the transparency.

Let's walk through an easy example. 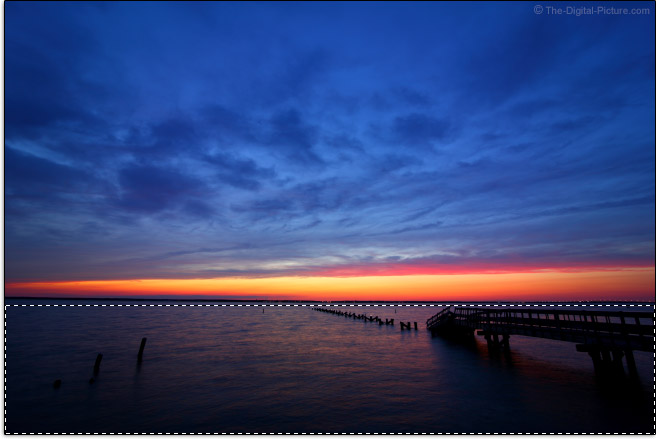 In this example, I wanted the brighter (and smoother) water from the lower layer to show through the darker top layer. So, I needed to make the water area in the top layer transparent. The layer order could easily have been reversed, in which case the sky in the top layer would need to be made transparent.

Since there was a large rectangular area to be made transparent on the top layer, I selected most of it with the marquise tool and, with the color black selected as the background color, pressed the delete key. Most of the water from the next layer down immediately shows through. Then I pressed CTRL-D to turn off the selection (eliminates the marching ants).

Remaining was an obvious hard line between the top layer and the bottom. Creating the transition between the layers is often the hardest part of this type of HDR processing. And a feathered edge is often what is needed. Note that you can leave the lower layer(s) visible or turn off their visibility while creating the top layer mask.

I next used the brush tool on the layer mask. For this task (on the 650px-wide image shown here), I used a black brush with a 15px size and a 50% hardness selected (with 100% opacity and flow). Since I was making the transition between the two image layers a straight line, I made the first brush tool click on the far left side to *just* take out the edge of the waterline. I then went to the far right side of the image and shift-clicked at the same waterline level to create a straight line from the other erased point. The softness of the brush feathered the two layers together in this transition-hiding dark area of the frame.

Since the waterline was straight and decidedly brighter than the shoreline (in both the bright and dark frames), I initially decided to go with a somewhat sharp transition between the frames – for a more dramatic image. For a variation of this result, "Finished 2" shows some of the darker water remaining visible over the brighter lower layer. For this effect, I selected a large, soft brush to make the top of the waterline partially transparent. This results in a less-abrupt transition between the brighter and darker layers.

HDR doesn't get much easier than this example. It took me less than a minute to select, load, process and save this HDR image. Though easy, this is a very common scenario nonetheless.

Here is a more challenging example. There is an interesting exposed vertical tree root at Mohawk Falls in Ricketts Glen State Park. When this photograph was captured, the dark-colored root and its surroundings were in heavy shade while the white falls were under a much brighter cloudy sky. This resulted in the dynamic range of the scene being beyond what the camera could capture in a single photo. 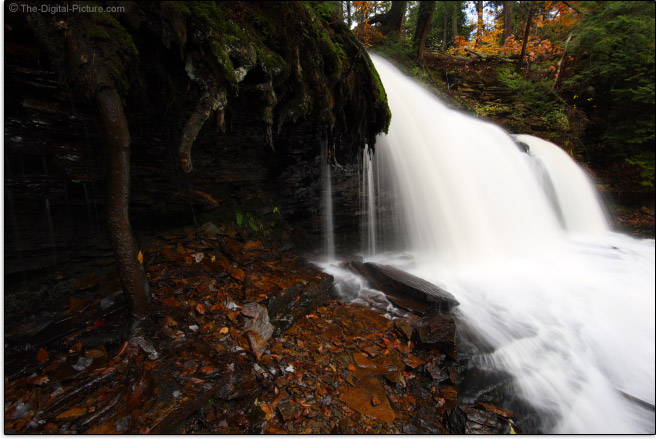 After layering the two exposures in Photoshop (bright on top), I created the "Layer Mask" shown above using a soft brush. Notice the mostly-soft-but-pointed black area at the top of the mask. To easily create this area, I over-painted the top of the falls with a soft black brush. Then, by pressing the X key in Photoshop, I changed my brush color to the previously-selected background color – white (press the D key) I then unpainted the sides of the falls white. I used the same soft brush for the right side, but wanted a sharper transition on the left side, so a smaller brush was used. Alternatively, the brush "Hardness" could have been reduced.

The layer mask hides the highlights in the brighter top layer, letting the darker water to show through. The process was, once again, easy. And the result, once again, appears natural.

Here is another more challenging example. The Bass Harbor Lighthouse (Acadia National Park, Maine) image below is a composite of three photos. 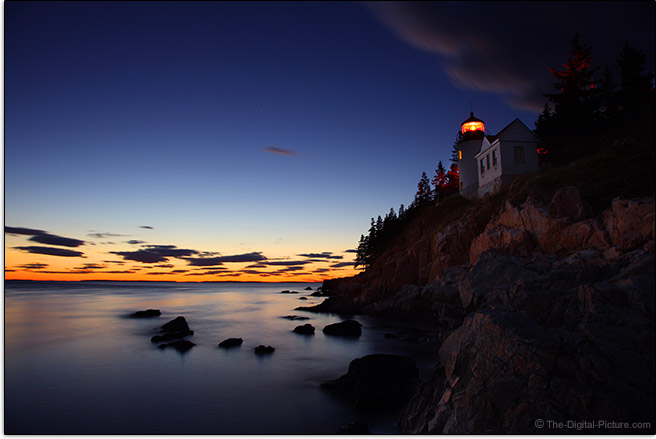 The 20 second primary/base image includes the water and sky. A 30 second image was used to pull detail out of the rocks on shore. A large, soft brush was used to let this detail show through.

A third shot was used to capture the light shining on the trees beside and behind the lighthouse, showing that layers processing described here does not limit you to just HDR needs. Use your creativity to take your results to the next level.

Here is another challenging example. The Oneida Falls (Ricketts Glen State Park, PA) image below is a composite of three photos. 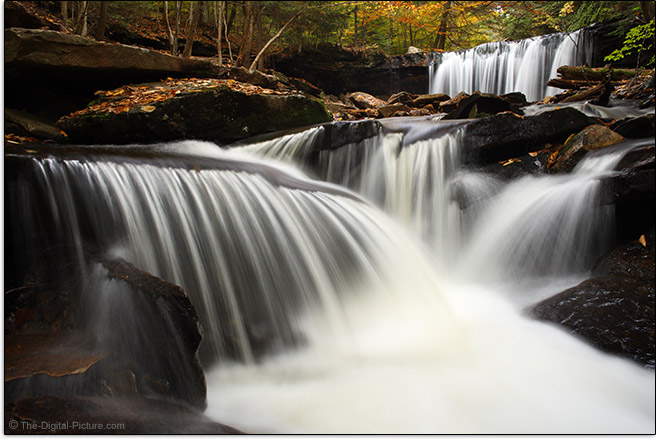 Oneida Falls (in the background) were in stronger light than the mid and foreground portions of the frame. One frame was captured with an exposure that left a very tiny portion of the brightest water in these falls blown (blinking highlights). Note that I did not try to correct this minor blown highlight issue.

Using a soft brush, the large background falls were separated from the mid and foreground in these two layers. Then, the blown foreground falls were made transparent in both of the other more-primary layers to let the slightly darker exposure to show through.

As an alternative to using layer masks, you can also directly erase the top layer to allow the lower layer to show through. The concept is the same. Vary your eraser brush size, hardness and opacity. Use the marquise tool and then press the delete key to clear large areas of the top layer quickly. Use the history brush to unerase portions of the layer.

Hopefully you now have some big ideas to go try out. Here are some additional HDR notes:

Keep the HDR layers technique in your pocket for the next time you are facing a scene with more dynamic range than your camera is able to capture. Or, just use the easy layers technique described above to create a composite image.