One of the Most Beautiful Places on Earth: Moraine Lake, Banff National Park 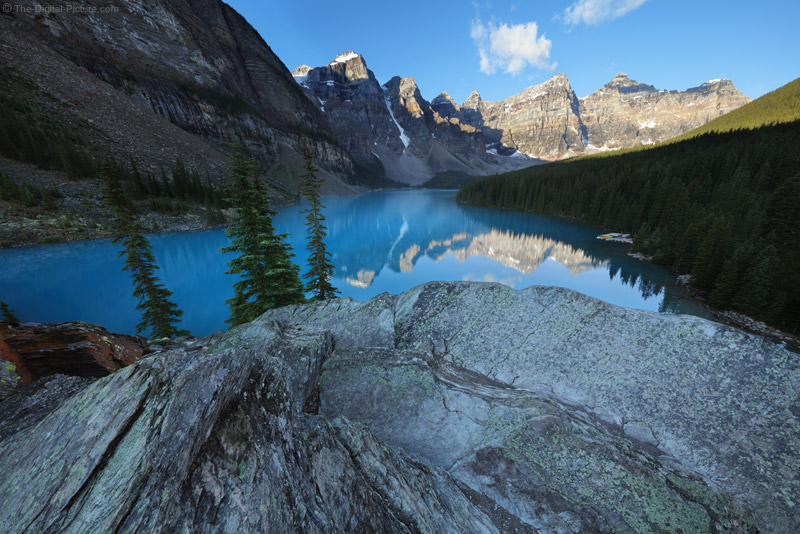 I have long admired images of Lake Moraine in The Valley of the Ten Peaks, Banff National Park (Alberta, Canada), especially those taken from the Rockpile. While huge numbers of great images have been captured here, none of them were captured by me. That is, none until recently.

The Rockpile (ascended via the Rockpile Trail) is a foreground-rich location overlooking an amazing turquoise glacier-fed lake that, when the wind is not blowing, reflects the close, steep, craggy, with-character mountains beyond it. I was blessed to spend 3 very early mornings at this location (and would return in a heartbeat). One quickly forgets the 3:00-4:15 AM alarms (followed by 11:30 PM bedtimes) when reviewing Moraine Lake images.

For this composition, I moved in close to a carefully-selected large rock. This rock, with plenty of leading lines, appears to fit into the edge of the mountain reflections like a puzzle piece, with even the notches appearing to align with reflected peaks. With the large mountain weighing heavily on the top left of the image, the large foreground rock is positioned proportionally higher on the right to, along with the shaded trees, aid in the overall image balance. Required for this perspective, and not visible in this image, are the tripod feet (and me) precariously positioned on the top edge of several different rocks.

With the mountain peaks being directly hit with sunlight and the dark evergreens being in deep shade, the dynamic range in this scene was extreme. Thus, I was shooting bracketed exposures. A camera's built-in HDR feature is a good way to capture bracketed exposures, but ... I didn't want the in-camera-generated JPG image and didn't want to wait for that composited image to be created.

My favorite method of shooting bracketed exposures is via the camera's AEB (Auto Exposure Bracketing) feature. Simply select the number of bracketed images desired and the desired exposure difference between them. Each image captured in succession, up to the selected number of bracketed frames, will have a different exposure (ideally for landscapes, the shutter speed is varied), insuring that all parts of the scene are adequately exposed in at least one of the frames.

To speed up the capture, select and use the camera's high frame rate (burst) mode. When the sun is rising, speed matters for HDR captures (this is a manual HDR image). The line between sun and shade moves quickly and ... that line becomes hard to composite if time lapses between captures. With AEB selected, a high speed burst will stop after the selected number of AEB frames.

I usually have MLU (Mirror Lockup) enabled when photographing landscapes, avoiding any possible vibration caused by the mirror raising. However, using MLU adds a short, but undesired, delay between the frames captured in an AEB burst. There is a better way: Live View is another method of achieving MLU. By using a remote release with Live View and high frame rate (burst) mode selected, one press of the remote shutter release (pressing and locking the release button down for long exposure brackets) captures the set number of frames in very fast succession (without the mirror moving).

Depending on the Lake Moraine scene and scenario, I was shooting 5 or 7 frames varied by 2/3 or 1 stop. From most sets, I deleted all except 3 or 4 images with the exposure variations needed remaining available. This image was created from three exposures.

Due to packing restrictions, I nearly left the Canon EF 11-24mm f/4L USM Lens at home. Upon arriving at Moraine Lake, I was SOOO thankful that I had it with me. Aside from using the Canon EF 16-35mm f/4L IS USM Lens on a second camera and tripod setup some of the time, the 11-24 was the only lens I needed at this location. And, it performed extremely well as did the Canon EOS 5Ds R camera I used behind it.