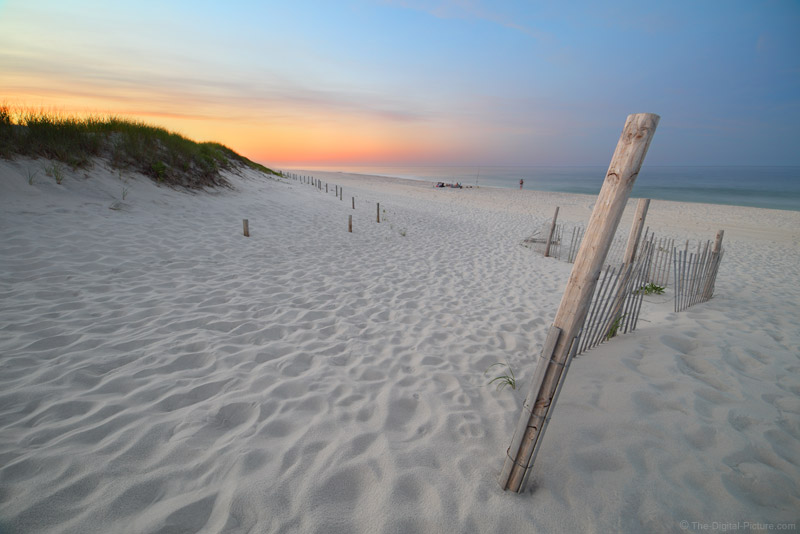 East coast beaches are usually better situated for sunrises than sunsets and Island Beach State Park, just south of Seaside Park in New Jersey, is usual in this regard.

A habit I have while photographing at the edges of the day, is to make regular glances to the east, "watching my back". While that habit may apply to safety in some locations, I'm referring to the lighting and color in the sky. It is natural for us to watch and photograph the sun rising or setting, but often great images are found behind you at these times of the day.

While photographing the colorful post-sunset sky to the west on this evening, I took that glance to the east. What I saw was that the color in the sky was visible toward the north while the rest of the easterly scene was very evenly lit. The ultra-wide 14mm focal length lens' angle of view was sufficient to capture that color along with the Atlantic Ocean and lots of sand in the foreground. To add some foreground interest, I moved in close to the sand fence post, placing it approximately 1/3 into the frame with the beach fishing party framed between it and the dunes to the left.

While the lighting was rather even, I still used a combination of three 1-stop-different exposures combined via a manual HDR process to darken the brightest portion of the sky relative to the rest of the beach scene.

Capturing a colorful sky is just one of the many reasons that your kit should have 14mm covered.