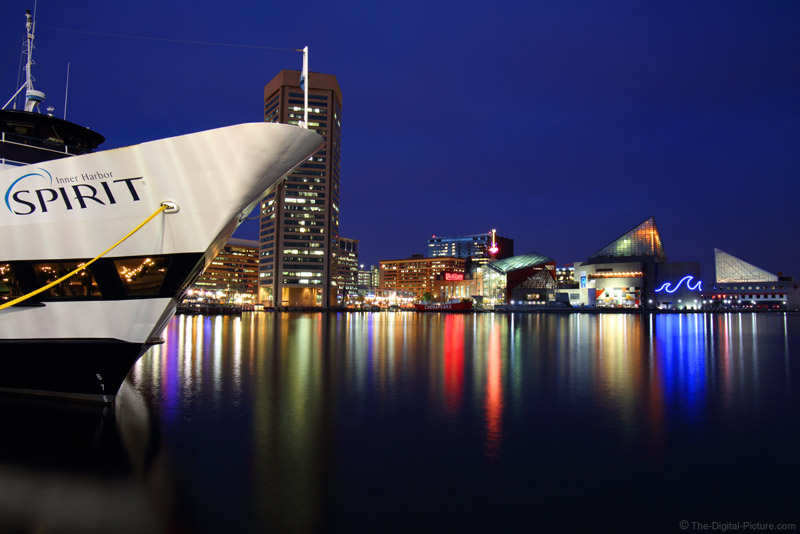 The historic Inner Harbor seaport is a showcase of the city of Baltimore, Maryland. While I was looking for interesting and creative photos in general on a day trip to this location, my ultimate goal for was to come away with a picture that captured the spirit of Inner Harbor in a single frame. Since I had only the latter part of the day to shoot, I was targeting sunset and the blue hour for that photo.

My afternoon scouting showed that the west side of the harbor offered my favorite view, one that included the most photogenic landmark buildings including the National Aquarium and Baltimore's World Trade Center. From the selected vantage point, the Hard Rock Cafe and Phillips signs also stood out and all of the colorful lights reflected in the water.

Not all waterfront is harbor, so the Lightship Chesapeake and the USS Torsk submarine docked in the background helped depict this waterfront properly as such. Of course, what finishes off the capture of the spirit of Baltimore's Inner Harbor better than a boat aptly named Inner Harbor Spirit docked in the foreground?

After selecting the specific location I wanted for my key photo, I captured a variety of photos using various lenses and focal lengths (there was no getting closer happening here). The scene shown in this sample picture was my favorite and I have it captured at various times during sunset including some with nicely pink clouds in the sky. The image shown here was captured just before total darkness. At that time, a 30 second exposure allowed a smooth motion blur of the very calm harbor, an f/16 aperture caused the lights to show a starburst effect without imparting a too-severe amount of softening of the image (due to diffraction) and the combination of 30 seconds and f/16 allowed a deep blue sky color to be retained.

The Canon EF 24-105mm f/3.5-5.6 IS STM Lens is a nice lens and the Canon EOS 5D Mark III is of course an awesome camera. This photo is basically as-shot. Based on the Standard Picture Style (in DPP), I cloned out a few paint tiny imperfections on the ship and reduced the brightness of the Hard Rock Cafe sign, Phillips sign and the side of the aquarium using an HDR technique that utilized a darker exposure showing through the primary exposure at those positions in the frame.