What is Canon EOS Focus Bracketing?

When enabled, the focus bracketing feature instructs the camera to take a series of pictures with the lens' focus distance setting increasing between each image captured until the specified number of images are captured or until infinity focus is reached. The resulting set of images can then be focus stacked during post-processing with the result being an increased depth of field, potentially by a significant amount, while avoiding the softening effects of diffraction caused by very narrow apertures use.

This technique is commonly used in macro photography as the depth of field is typically extremely shallow at very close focus distances. Landscape photographers frequently use this technique to keep entire scenes that include a close foreground subject in focus. 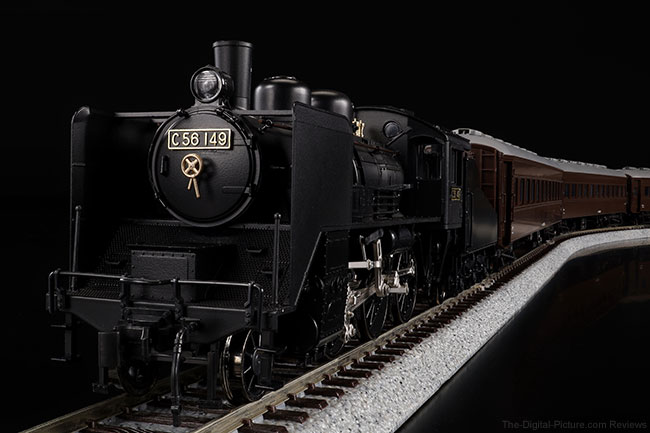 Keep in mind that the depth of field difference is much more obvious in the full-resolution images.

There are four settings used to control the focus bracketing feature.

Hopefully, the first option is self-explanatory. The feature is either enabled or disabled.

The focus increment setting is definitely the vaguest on this list. This setting deals with the granularity of the focus distance adjustment between each shot, with 1 requesting fine increments and 10 requesting wide increments. Specific distance changes are not able to be input and with the depth of field increasing with distance, a non-specific increment value makes sense. Focus brackets always start with the initial focus distance and proceed toward infinity (the ending distance cannot be directly specified). "The wider the pre-set lens aperture, and the closer the lens is to the subject for the first shot, the finer the focus increments should normally be, and the more Focus Bracketed shots should be dialed-in." If unsure, select "1". Too many shots is better than not enough.

Exposure smoothing is disabled by default, but when enabled, the camera keeps image brightness consistent through the image set. This feature is primarily useful for compensating for light transmission losses when lenses, especially macro models, are focused at very close distances.

Optional is for the camera to create a new folder on the memory card before the bracketed sequence starts, making it easy to separate a potentially large number of images. Tapping the "Folder +" icon creates a new folder and subsequent images are saved there.

Which Lenses are Officially Supported by Focus Bracketing?

Initially, Canon engineers specified that only the lenses listed below are officially compatible with the focus bracketing feature. However, reports exist of additional lenses appearing to be supported by this feature, and new lenses are regularly introduced. While it seems safe to say that all RF lenses will be supported, that expectation was not initially confirmed by Canon. We also do not know why official compatibility is limited to this a list of lenses, though the lenses on this list seem like logical choices for use with this feature.

The initial list for the R5 and R6 is significantly expanded:

"... Canon engineers have revealed nothing about the calculation process involved in the Focus Bracketing feature. We can infer that the system is factoring-in the lens (and focal length) in use; the actual lens aperture in effect; and the initial sharp focus distance applied by the photographer. In other words, it’s probably safe to assume that the amount of focus deviation at Level 3, from shot-to-shot with a 100mm macro lens, initially focused at its nearest focus distance and with an aperture of f/4, is different than it would be at level 3 with the 16-40mm lens at f/11, pre-focused at 4 or 5 feet away for the first in a series of landscape shots."

Still, it seems that this process could be further automated. If the camera could be informed of the desired far focus distance, either directly input into the camera or selected via the lens (perhaps make infinity the default), the camera would be able to automatically calculate both the focus increment and the number of shots.

All of the images captured by Focus Bracketing are stored on the memory card. Each set of images can be used to simply select the single best-focused option. Or, more typically, further processing via "focus stacking" is required. This process cannot be done in-camera and probably most of us would not want to wait while our cameras did this task.

There are a number of software applications that support focus stacking, including very popular Adobe products, but focus stacking is now included in Canon Digital Photo Professional's composite tool. Initially introduced in version 4.10 with support for the Canon EOS R, EOS RP, and EOS 5D Mark IV, the DPP compositing tool comes highly recommended, especially for some of its processing features including the ability to adjust the amount of background blur in a final stacked result. DPP creates a folder in the same folder the stacked result (JPG or TIF format) is being written to. Binary files are stored in this folder including a large file for each image used in the stack along with a data file. These files are required for the adjustment functionality and can be deleted after the image is finished.

Canon's DPP software is provided free with Canon EOS cameras (I use DPP a lot).

The Christmas cactus that spends most of the year looking rather mundane, essentially green foliage in a pot, finally opened a single bloom. These blooms last only a couple of days, they are irresistibly-beautiful, and I decided that testing the EOS RP's focus stacking feature was a good excuse to photograph this one.

For this first focus bracketing and stacking attempt, I mounted a Canon EF 100mm f/2.8L IS USM Macro Lens to the EOS RP via an Adapter and mounted both on a tripod. It was a cloudy day, so I positioned the flower in diffused ambient light with a bright wall behind it.

The 100mm f/2.8L IS macro lens, like many others, has a significant amount of focus breathing with the subject being magnified very differently at the ends of the necessary focus adjustment range. The final focus stack image framing will be the same as the most-tightly-framed image in the stack (and retains the original pixel dimensions) and thus the composition was adjusted for the tightest framing.

The ambient light was not changing much and that means a manual exposure is usually ideal. With the end goal of focus stacking being to have tremendous depth of field, it makes sense to use a narrow aperture and f/11 is a nice compromise between a good amount of depth of field and the softening effects of diffraction. ISO 100 was selected for the lowest amount of noise possible and a couple of test shots proved that a 0.5 second shutter speed yielded the correct brightness. Note that testing exposure before initiating a focus bracketing sequence is important – 50 or 900 images are not necessary for this. The 2-second self-timer was used to initiate the relatively long captures.

With the camera in AF mode, the closest focus distance required by the stack needs to be selected at the beginning of the capture. I opted to place one of the camera's single (spot) AF points on the closest part of the flower. Alternatively, The focus distance could have been adjusted after half-pressing the shutter release (or setting only the back AF-button for AF). I enabled focus bracketing, guessed that I would need 25 images, guessed that "4" sounded like a good focus increment number and figured that exposure smoothing would minimally do no harm in this case.

Upon the shutter release being pressed, the camera paused 2 seconds and then captured the promised number of frames. When the bracketing was completed, the lens' focus distance was beyond everything I wanted to be in focus, confirming that enough exposures were captured.

Upon reviewing the images in DPP, I discovered that only 14 were needed for complete depth of field coverage in this example. After selecting those 14 images, the depth compositing tool was selected (Alt+Shift+B) and the Execute button was pressed, accepting the defaults. After quickly erasing the background using the paint fill tool in Photoshop and doing some very minor cleanup, the result is what you see here. 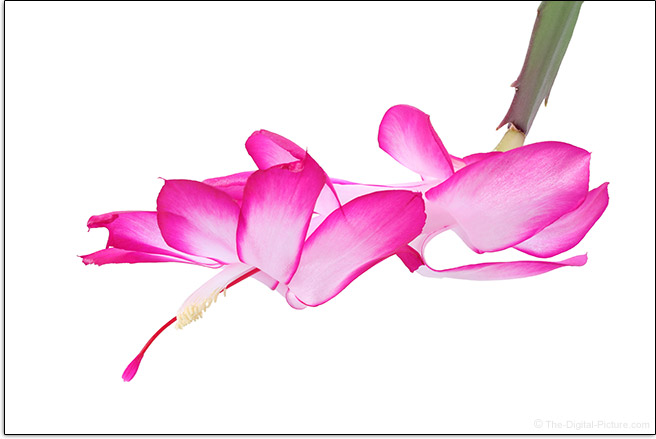 In the above examples, the first row shows full images reduced in size. The second row shows significantly-cropped images that better show the depth of field comparison. The last two rows show 100% crops.

This was a very easy process and the result looks great. 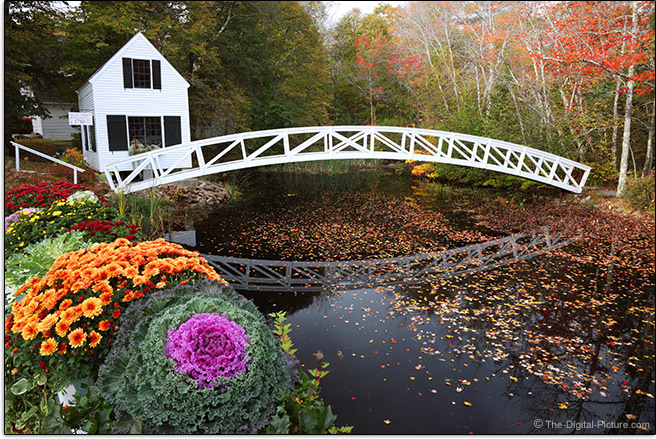 Also check out the Canon EOS R5 Focus Stacking at the Somesville Bridge and Selectmen's Building example. Again, the process was easy, and the results are superb.

A big "Thanks!" goes out to Canon USA's Rudy Winston for significant assistance in putting this article together. The quotes included above are his.