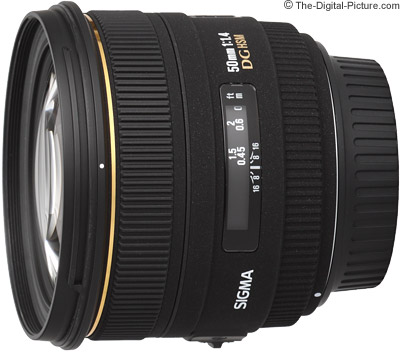 It is hard not to be drawn to a fast prime - the short, fat, solid-feeling lens with very low-light capability is very attractive. So, I don't find it surprising that the Sigma 50mm f/1.4 EX DG HSM Lens has received a lot of attention in the early days of its availability.

What you also get when shooting with a wide-aperture lens wide open is a narrow DOF (strongly blurred background and foreground - especially with a close focus distance) and a fast, action-stopping shutter speed. Both of these are great attributes, but if you are relying on autofocus for this action it needs to be very accurate to deliver the DOF at the right focus distance. Even a relatively small mis-focus results in a blurred subject. And to cut to the chase, the Sigma 50mm f/1.4 EX DG HSM Lens has proven very inconsistent for me in the focus accuracy department.

I have thrown out as many as 70% or more images from a single shoot of over 100 non-action, wide aperture shots because they were very OOF (Out of Focus). These were not even close-distance shots that are typically most challenging for shallow DOF lenses. The Sigma 50 delivers better results in very good light, but the percentage of salvageable shots is still not as high as expected.

Though a higher percentage of the mis-focused shots were front-focused, a significant number were back-focused as well. Therefore, focus calibration is not going to help this lens. Stopping down the aperture improves the keeper rate significantly - the resulting deeper DOF will include the subject much more frequently. APS-C sensor bodies (1.6x FOVCF) will have less trouble than full-frame bodies - the longer distances required for the 1.6x bodies to frame the scene identically will deliver greater mis-focus-hiding DOF.

The unreliable focus performance is a big disappointment, because otherwise, Sigma has delivered us a very nice lens in the 50mm f/1.4 EX DG HSM. 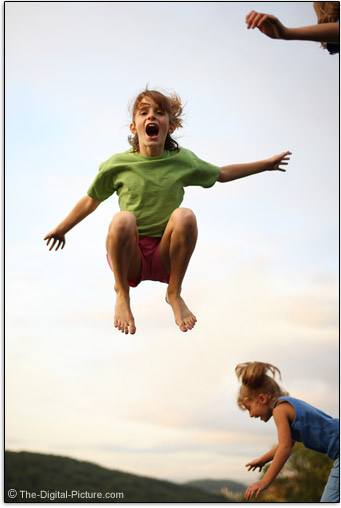 Flying - or catching flies - I'm not sure which. With an f/1.4 aperture, action is easy to stop even after the sun has set as in this picture.

The Sigma 50mm f/1.4 EX DG HSM Lens's AF is powered by Sigma's HSM (Hypersonic Motor). AF speed is not great - Initiating AF causes the lens to reasonably quickly make a focus adjustment, but frequently a second adjustment is made - effectively doubling the autofocus time. HSM is quiet (makes autofocusing seem faster) and FTM (Full Time Manual) focusing is enabled. FTM focusing is a very nice feature - Manual focusing is always available (no switch needed) and the focus ring does not turn during AF. The focus ring is nicely firm with no play though turning it gives the feeling of fine gears meshing inside. It is not rough, but not absolutely smooth either. 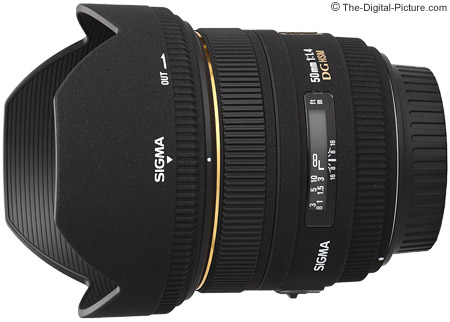 MFD represents the Minimum Focus Distance setting on the lens. The Sigma 50 f/1.4 does not change size with focusing, but the lens elements (all of them) move forward/backward about .3" (7mm) inside the lens (shown above in the sans-hood pics). The relatively-very-large front element does not rotate (this matters to circular polarizer filter users). The 77mm filter size is also relatively large, but common - I like the ability to share these filters with many of Canon's better lenses.

Overall build quality of the Sigma 50 f/1.4 is very good (I can't afford intentional torture testing to prove this of course). Lots of glass densely packed in a moderately-small sized lens helps create this feeling, but still, I like the build/feel of the lens. The finish is the standard Sigma black matte - it is non-reflective and looks nice, but is hard to keep clean. A petaled lens hood is included as is the current Sigma-standard center/side-pinch lens cap and a zippered/padded nylon lens case.

Mousing back and forth over the above labels shows a noticeable difference in sharpness in the horizontal (most radial) and vertical (most tangential) lines.

Two stops of corner shading will be noticeable from the Sigma 50 f/1.4 on full frame bodies at f/1.4. While this may not sound good, it is good for a fast prime and at least a full stop better than any of the Canon 50's I've been referencing. The advantage of the Sigma's larger objective lens is apparent here. By f/2.8, where all of these lenses get very sharp, the difference is mostly gone - though the Canon 50 f/1.8 still trails the pack. Users of 1.6x APS-C camera bodies will not notice much vignetting from the Sigma or much difference between these lenses in this regard (the Sigma will show slightly better corners wide open).

Put a bright light in the corner of the frame and most lenses will show some flare. The Sigma 50mm f/1.4 EX DG HSM Lens is no different in this regards. Because flare appears differently from lens to lens, comparisons are sometimes difficult to make and this is the case with the 50mm lenses I've been comparing. Overall, the Sigma shows slightly less flare than the Canon f/1.2 and f/1.4 - and less than the f/1.8.

Macro lenses are built to focus closely and will therefore deliver much higher magnification. There is not much of a differentiator in the MFD for the remaining 50mm lenses - the ones I've been comparing. All are rated at a 46° diagonal field of view with an identical MFD. Interesting is that the Sigma has a .01x difference in rated MM (Maximum Magnification) - or 93% of the Canon values. This percent aligns with my test numbers that show a 47.25 x 31.5" (1200 x 800mm) target being framed at 70.5-70.8" (1791-1798mm) for the Canon lenses and 66.0" (1676mm) or about 93% of the distance for the Sigma. Focal lengths are supposed to be rated at an infinity focus distance, but even at hundreds of feet, the Sigma still frames the scene a similar percentage wider than the Canon lenses. While this is a real difference, I'm not sure it matters if your prime lens frames like 50mm or 46.5mm. It's a small difference.

And back to the MM number - .14x is a relatively low maximum magnification for lenses in general. Adding an extension tube will make a big difference in this value on this lens. Sigma's extenders/tele-converters are not compatible with the Sigma 50 f/1.4. 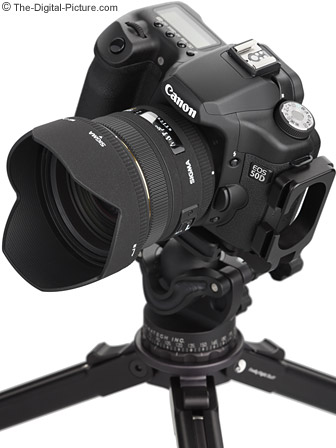 The Sigma 50mm f/1.4 EX DG HSM Lens is shown mounted on a Canon EOS 50D in the above pictures.

Fifty mm lenses were extremely popular on film cameras and have remained popular with the latest DSLR crowds today. On a 1.6x body, these lenses make great portrait lenses in addition to the wide range of other uses they are called into action for.

The Sigma 50 f/1.4 is available in Canon (reviewed), Nikon, Pentax, Sigma, Sony and Four Thirds mounts. Full disclosure: You should know that there are potential issues when using a lens made by a manufacturer other than the camera body manufacturer. Since Sigma reverse engineers (vs. licenses) manufacturer AF routines (except for their own bodies), the possibility exists that a new body might not support an older third party lens. Though not common, this has happened. Sometimes a lens can be rechipped to be made compatible, sometimes not. Again unusual is the situation where the lens and body manufacturers fault each other for a problem. To its advantage is Sigma USA's 4-year warranty - it is far superior to Canon's standard 1 year warranty. The Sigma risk is probably low, but you should figure this into your purchase decision.

Inconsistent focus accuracy is definitely the downside of this lens. It is possible that another copy of this lens would focus more consistently, but my guess (helped by feedback from others) is that my lens is representative of this model. Thus, unless you are primarily using manual focus or shooting at narrow apertures (f/4), I suggest buying the Canon EF 50mm f/1.4 USM Lens instead. While it may not be as nice of a lens as the Sigma 50 f/1.4, it will focus more accurately and therefore delivers much better image quality. It costs noticeably less as well. The Canon EF 50mm f/1.2 L USM Lens is a really nice lens, but it is going to burden your wallet significantly more and will not deliver image quality much or any better than the Sigma (with AF considerations removed). If you happen to get a properly/consistently focusing Sigma 50mm f/1.4 EX DG HSM Lens, you have received a good value for your money.