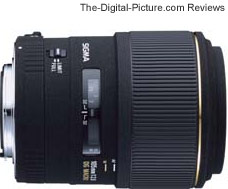 The Sigma 105mm f/2.8 EX DG Macro Lens is - as you can discern from the name - Sigma's entry in the fixed short-telephoto focal length macro lens category. And in this case, Sigma means a true 1:1, close-up macro lens. Like most macro lenses (the Canon MP-E 65mm 1-5x Macro Lens excluded), this Sigma lens also can be used as a normal 105mm short telephoto lens.

Opening the box and removing/opening the nice, well padded lens case reveals a very-nice-to-use sized, well-built lens. This size be visualized in the chart and comparison images below ... 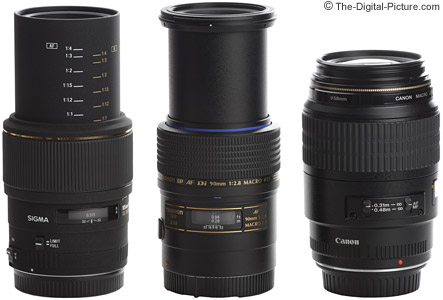 What is also obvious from the comparison photo above is that the Sigma 105 Macro extends - by up to 1.8" (42mm) - when focusing. Although not a big deal, when you are using a lens that extends while working with close subjects, care must be taken to not bring the lens in contact with those subjects. The relatively small 58mm filter threads do not rotate when extended or retracted.

What can also be seen in the above photo are magnification markings on the extended portion of the lens barrel. Two sets (one white, one yellow) are provided. Here is why ... The Sigma 105mm f/2.8 EX DG Macro Lens uses a not-nearly-as-nice as HSM or USM 2-step combination of a push/pull clutch and an AF/MF switch to select the desired focus mode - this is what Sigma calls their DF (Dual Focus) System. The focus ring is pushed forward or pulled backward to disengage/engage the manual focus mechanism. In the forward AF position, the focus ring turns freely but does nothing and AF does not cause the ring to turn. In the rear MF position, the manual focus mechanism is engaged. Back to the magnification markings - Because the focus ring moves in relation to the markings, 2 sets are needed. The white are for use during AF and the yellow are for use during MF. The picture below illustrates the Sigma DF System.

The Sigma 105 Macro's AF system is definitely not one of its strengths - AF is slow, noisy and delivered a well-above-average number of OOF (Out of Focus) shots. I can often live with slow and noisy, but I find a high percentage of AF shots from this lens to be at least slightly out of focus even on a Canon 1-Series body using only the high-precision center focus point. If macro photography is your primary use for this lens, MF is probably what you care about most and the poor AF performance may not be an issue for you.

What may be the Sigma 105mm f/2.8 EX DG Macro Lens' biggest strength is image sharpness. This lens is sharp wide open and from corner to corner even on a full-frame body. This is the Sigma 105 attribute I hear touted the most - and rightfully so. However, this is a macro lens. Since DOF (Depth of Field) is very shallow at close distances, you will likely find yourself using this lens stopped down significantly. But maybe not to this lens' uniquely narrow minimum aperture of f/45 (f/32 with Nikon and Pentax mounts). Unfortunately, diffraction causes images to go soft beyond f/16 or f/22, so this extreme-minimum aperture is not helpful to me.

CA (Chromatic Aberration) is very well controlled. Vignetting is minimal. Distortion is negligible. Although it has 8 aperture blades, bokeh (quality of OOF areas) is only OK (not as smooth as the Canon 100mm Macro for example). 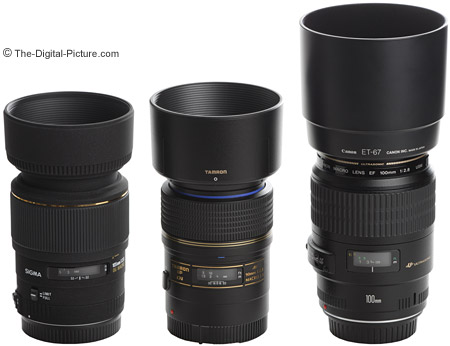 With their hoods in place, from left to right, are the Sigma 105mm f/2.8 EX DG Macro Lens, Tamron 90mm f/2.8 Di Macro Lens and Canon EF 100mm f/2.8 USM Macro Lens. The Sigma and Tamron lenses come with a hood included while the Canon hood is optional. As is obvious below, these macro lenses are much more similar in size when extended 100% at their maximum magnification of 1:1 (1.0x). 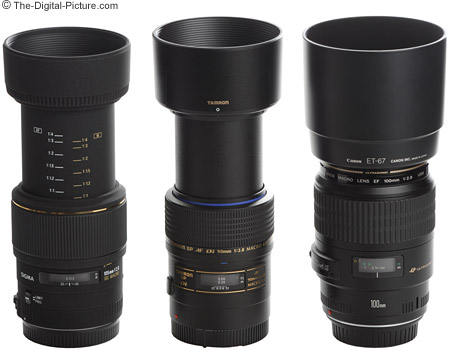 The Sigma 105 Macro's included lens hood is another unique attribute for this lens. First, it is a non-reversible, screw-in type. It screws into the 58mm filter threads - a relatively slow procedure. And because the 58mm threads are no longer available, the lens cap no longer fits - the hood must be removed to install the cap or a 58mm filter. Also unique is that the lens hood has threads to accept a 77mm filter. You can mount a 77mm filter such as a circular polarizer to the end of the filter where it is easy to reach. But, then the lens hood is not providing any shading for the filter. I suppose that buying a 77mm lens cap to mount on the lens hood would resolve the lens cap issue. But in the end, the front element of this lens is so far recessed, I'm inclined to simply forego the hood altogether on this lens. 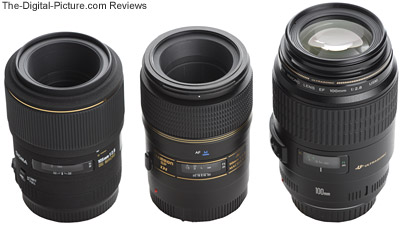 The Sigma and Tamron macro lenses' objective elements are deeply recessed (better-protected, harder to clean) while the Canon's is not.

Since lens flare is what the hood is designed to help prevent (in addition to preventing damage), I'll go there next. The colorful circles of lens flare are basically non-existent in this lens. Unfortunately, veiling flare is significant. The result of having a bright light(s) in/near the frame is a washed-out/low contrast image. 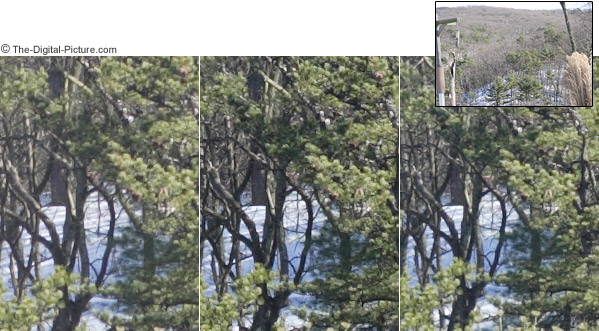 The above near-center 100% sample crops were from the Sigma 105mm f/2.8 EX DG Macro Lens (left), Canon EF 100mm f/2.8 USM Macro Lens (center) and Tamron 90mm f/2.8 Di Macro Lens (right). All crops are from an un-moved, tripod-mounted Canon EOS-1Ds Mark II with identical settings for each photo (1/100, f/8, neutral contrast, AWB, mirror-lockup, 2-Second self-timer). Lens hoods were in place. All were shot within 4 minutes of each other at approximately 4:20 PM on Feb 24th - late on a very clear winter day - facing southeast. You can determine where the sun is by the direction of the shadows (far out of the picture). The Sigma, by virtue of its longer focal length, has less sky (brightness) in the picture (inset is a full-frame down-sized image from the 105). The difference in contrast is big. The lower contrast is not apparent in all of the images I've taken with this lens, but it does show in some.

The Sigma 105mm f/2.8 EX DG Macro Lens' focal length is slightly longer than the competing macro lenses. This variation does not make much difference from Canon's 100mm macro but is somewhat-noticeably longer than the Tamron 90mm macro. This focal length is a good compromise between working distance (and perspective), background diffusion and handholdability. Aside from macro work, this lens will make a nice full-frame portrait lens and a nice mid-telephoto on a 1.6x FOVCF body. A relatively wide f/2.8 aperture allows action stopping / handholdable shutter speeds at lower light levels.

I mentioned earlier that the Sigma 105 Macro is well built and I'll touch on that again. The barrel feels solid and the focus ring is smooth. Only a slight amount of play can be felt in the ring or the barrel - and only if more-than-normal force is applied. I still don't like Sigma's matte finish - I find is easy to get dirty and hard to get clean. Others like it a lot - it is a personal thing.

The Sigma 105 Macro is available in Canon (reviewed), Nikon, Sigma, Sony/Minolta, Pentax and Four-Thirds mounts. You should know that there are potential issues with third party lenses. Since Sigma reverse engineers (vs. licenses) manufacturer AF routines, there is always the possibility that a new body might not support an older third party lens. There are examples of this happening in the past. Sometimes a lens can be rechipped to be made compatible, sometimes not. Second, there is the risk of a problem that results in the lens and body manufacturers pointing blame at each other. However, Sigma USA's 4-year warranty is far superior to Canon's standard 1 year warranty (though many credit cards will double the Canon warranty for you).

You are likely considering one of the other available Macro lenses if you are researching the Sigma 105mm f/2.8 EX DG Macro Lens. The two that most directly compare have been mentioned above - The Canon EF 100mm f/2.8 USM Macro Lens and Tamron 90mm f/2.8 Di Macro Lens. The Sigma is at least as well built as the Canon and Tamron. It is similar in sharpness to the Canon and a slightly better than the Tamron. The Sigma has less vignetting than the Canon but is similar to the Tamron. It is also has the lowest price.

To me, Canon's USM autofocus system is easily worth the price differential alone (even including the optional lens hood). Add to that the better flare performance, better bokeh, a fixed physical length ... and you have my opinion. My second choice would be more of a toss-up. The Tamron has better AF accuracy, better flare control and a one-step MF system.

All said, the Sigma 105mm f/2.8 EX DG Macro Lens is a really sharp and well-built lens for the price - a good value.