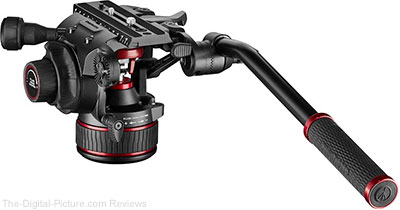 This review is the result of a quest. One of the easiest methods of improving video quality is to smooth the camera movements by using a fluid head. mostly, my video recording has mostly not utilized a fluid head, and I finally took the time to research the available options. The Manfrotto 608 Nitrotech Fluid Video Head was selected.

On this fluid head selection requirements list was the capability to support any camera gear in the kit, including lenses ranging from small and light up to 600mm f/4. In addition, continuous counterbalance was required. This feature facilitates directing the camera up or down, with the head maintaining the selected angle without pressure holding it there (no flopping over, no return to zero).

For my purposes, a flat base on the head was required. I'll get to the leveled base requirement in a bit, but a flat base permits head installation on a wide variety of supports, including sliders.

The fluid head required excellent performance and high quality, but affordability was also on the requirements list. At review time, video heads at B&H range in price from $39.95 to $36,280.50 for the Vinten Vector 750i (and the price for the ARRIHEAD 2 Production Tripod Head is not disclosed). Neither end of that range was going to work, and selecting a model with a great price-performance ratio, a strong value, was the goal.

Along with performance, a fluid head's size and weight tend to increase with the price. The best fluid head for general-purpose use required reasonable portability — a modest size and weight. 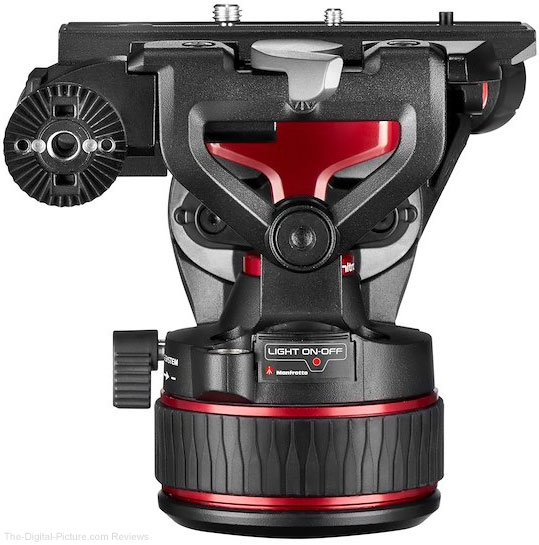 While the Manfrotto 608 Nitrotech and its skeletal design may appear complicated at first glance, it has a rather simple design. Basically, for each movement, panning and tilt, there is a fluid resistance control knob and a drag/friction control knob.

The large, wide-ribbed, rubber-coated panning fluid resistance control (around the base) is smooth, easy to turn, and has just under 720° of rotation for a rather slow adjustment rate. The range of fluid resistance is nice.

The small, repositionable, plastic-covered panning drag control (brake) lever locks the base down quickly, with about 90° of rotation between free and locked very tightly. Partially-tightened panning drag is smooth — practically good enough to suffice for fluid-controlled movement. This panning drag control lever is not captive, but it is unlikely to unintentionally loosen completely.

Both panning controls are easy to access and, combined, they provide a full range of panning resistance, from free to firm to fully locked. 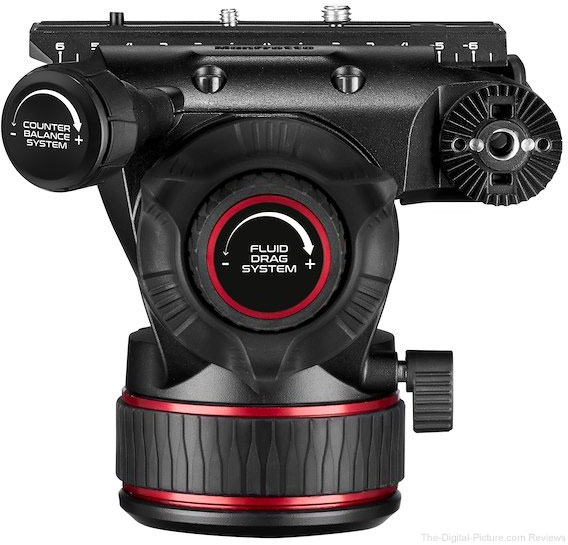 The mid-sized, wide-ribbed, rubber-coated tilt fluid resistance control (on the left side) is firm but smooth, and just under 360° of rotation provides a nice rate of adjustment. The range of fluid resistance is nice.

Wrapped around the tilt fluid control is the plastic-winged tilt drag control (brake) control. While the large size provides good leverage, I find the position of the three wings a bit awkward for firm pressure. One additional or fewer wing would make the design easier to firmly tighten. Adding a pan handle or accessory to the left rosette also reduces accessibility to this feature. This control's pressure builds with its tightness.

The partially-tightened tilt drag is relatively smooth and, combined with the fluid pressure, very smooth tilt movements are provided for. 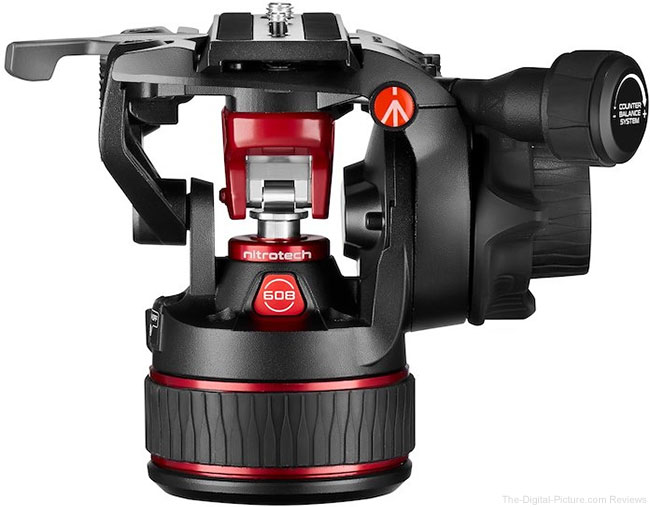 Just forward of the tilt controls is the sinusoidal Nitrogen (the source of the Nitrotech part of the name) gas piston counterbalance mechanism knob. This feature removes the gravity factor from tilting, permitting the up- or down-angled camera and lens to remain stationary. The knob pulls out for easier access and firmly turns many revolutions for a full extent adjustment. 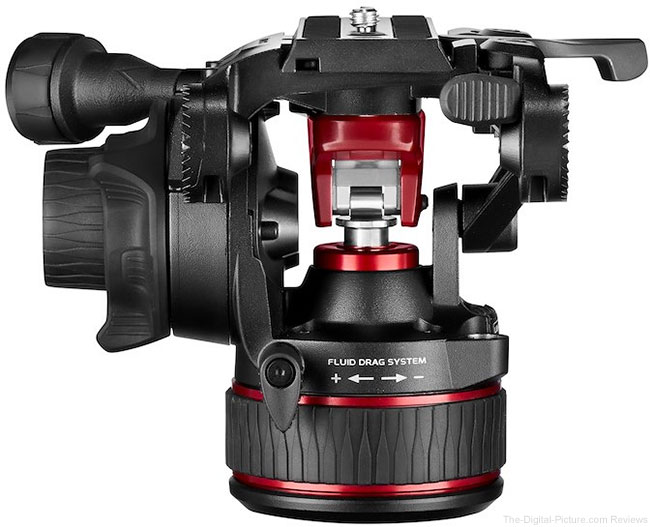 On the back of the head are a pair of Manfrotto Easy Link system rosette mounts. Use these to attach the panning bar and other accessories such as a monitor and articulating arm. The rosettes have centered 3/8"-16 ports with Manfrotto and ARRI anti-rotation slots.

A short rossette mount extension is provided, in part to enable a left-side-mounted pan handle to clear the panning brake lever. 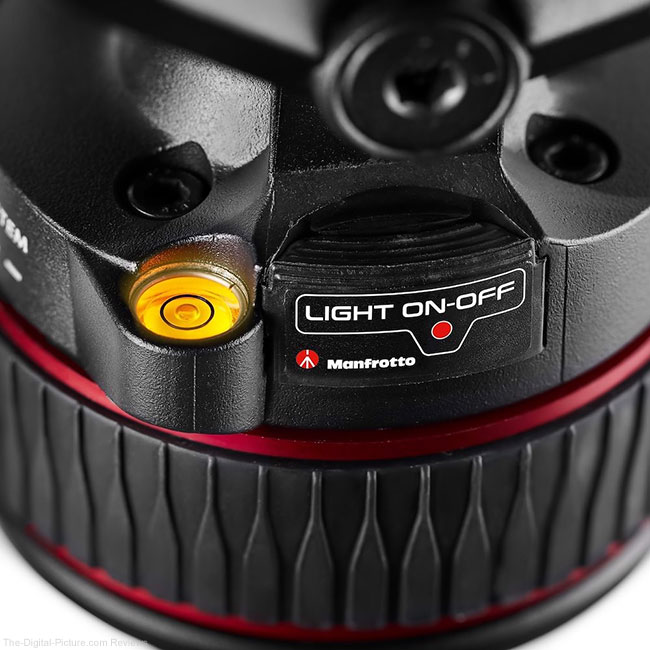 Just above the base on the right side is a spirit level, complete with a thoughtful bubble light feature that enables setup in complete darkness without the aid of a flashlight. Note that the ideal directly downward view of this level is blocked by the head's housing. 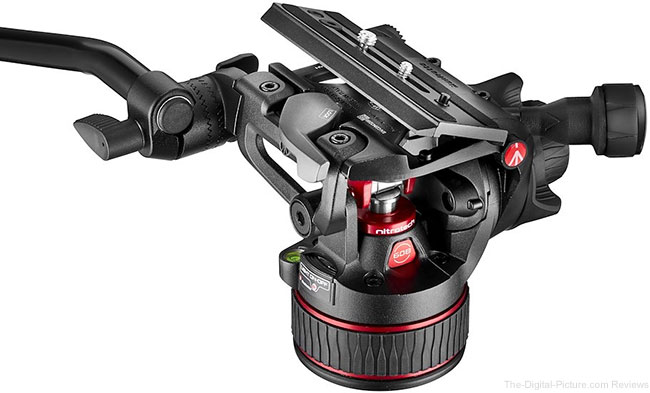 As usual, the mounting system is on top. A long, wide Manfrotto 504PLONG Long Quick Release Mounting Plate is included, and having additional plates for each camera is convenient. The plate top-loads into the clamp, and the length of the plate is utilized for balance adjustment. The clamp snaps closed around the plate, and permits fore and aft adjustment prior to being fully locked. That that lock lever is pulled out to lock the plate seems backwards to what I'm accustomed to, but that trait is of minor consequence. This design facilitates a squeeze that applies strong locking pressure.

Releasing the plate involves pushing the lever into the head while pushing a release button on the back of the clamping system. Only then will the plate fully release, lifting straight up. The plate is indexed to aid in quick balance adjustment.

Cameras and lenses attach to the plate via flat-slotted camera mounting screws, with two 1/4"-20 and two 3/8"-16 screws provided. The screws require a wide-bladed screwdriver — consider getting a Vello COOLTOOL Camera Plate Combo Tool for each of your bags. A rubber plug in the plate permits these screws to be included or excluded from the available selection. A multiple screw attachment prevents twisting.

Those accustomed to elegant quick-release systems such as Really Right Stuff's Lever-Release Clamp will likely find this head's quick release system a bit kludgy. However, it is strong, and it functions well. As my kit is based on the Arca standard, I mounted a Really Right Stuff PC-LR Round Panning Clamp to the Manfrotto plate, permiting quick 90 degree rotation from camera body to tripod mount ring-equipped lens orientation.

Here are some specifications:

As revealed above, there is a Manfrotto 612 Nitrotech Fluid Video Head designed for heavier minimum and maximum weights.

These heads feature very good build quality, and they are visually attractive.

As usual for video heads, the Manfrotto 608 Nitrotech Fluid Video Head is a 2-way model, with pan and tilt solely featured.

Seldom is a horizontally non-level camera desired for video, and usually, tilted movie footage appears as an unprofessional mistake. Even a floor may not be perfectly level, which means that equally extended tripod legs may not result in a level tripod apex. Setting the legs to less than their full extension, moving outdoors, or encountering any of the myriad of other reasons for non-levelness challenges tripod setup.

If locking the camera and lens into a fixed position, a simple ball head will permit fast leveling and handle the support job with ease. However, those looking for a fluid head intend to move the camera while recording.

With no roll adjustment available on the head, the tripod becomes responsible for levelness. To make this task easy, select a leveling platform. Leveling platforms sit in a bowl that permits rotation of the base assembly in all directions. Loosen the leveling platform assembly, adjust the platform until level, and tighten the assembly with the large locking knob below. The tripod is then ready for the flat base 2-way head.

Many video heads mount directly in a bowl. However, those heads are not suitable for certain uses.

The setup is easy. Ensure the camera is supported in hand, and loosen the tilt drag knob until there is no resistance.

Next, slide the mounting plate forward or backward until the rig is balanced, and lock the plate into the selected position. Then, adjust the counterbalance until matched to the weight of the lens. When properly adjusted, the lens can be tilted front or back without gravity affecting the position upon release of the gear or pan handle. Again, the setup is easy — and not fiddly.

Adjust the four fluid and drag controls as desired to finalize the setup. 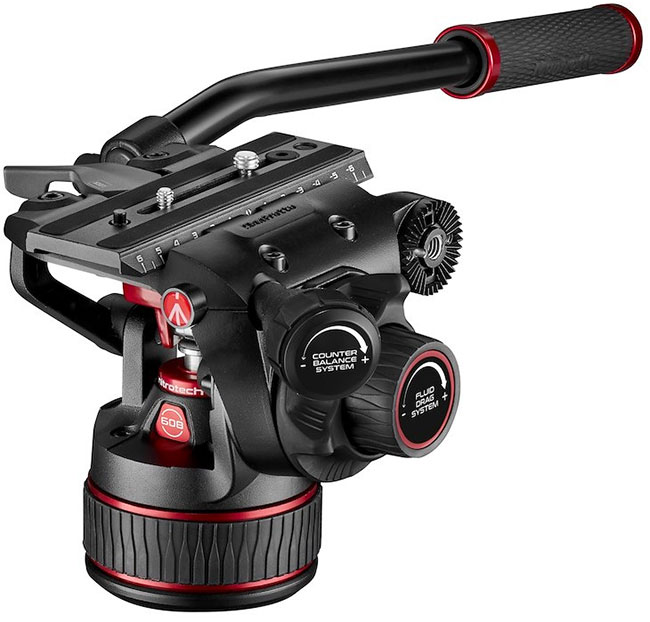 The Manfrotto 608 Nitrotech Fluid Video Head In Use

In use, this head's pan and tilt movements are smooth and judder-free, fulfilling the fluid promise. Skill is still required to create the perfect pan and tilt moves, but this head makes acquiring them quite easy.

As noted in the beginning of this review, the Manfrotto 608 Nitrotech Fluid Video Head is an affordable, high value model. Missing a digit or two from the front of its price, this head is not intended to be the ultimate video head. What are this head's drawbacks?

A sound like small bubbles crackling was initially present during fluid pressure adjustment and movements. However, it soon disappeared from the movements. Apparently, a brief break-in period was necessary. I still hear this sound sometimes during fluid adjustments, but those adjustments are not often made during audio recording, making the sounds a non-issue.

With a 600mm lens mounted a slight pushback/backlash is seen when releasing the panning handle, especially without a pause after a tilt movement. Adding even slight resistance via the drag control knob reduces the pushback, but a slight flex in the system seems to remain at play. Holding the pan handle continuously resolves this issue. Enabling lens image stablization eliminates all vibration, but IS causes the image to shift back upon stopping a movement.

The 600mm f/4 lens seems to be pushing this head's movement capabilities, with the slight system flex and slight vibration showing.

Note that the pan handle places significant torque on all such heads, even turning the leveling platform loose a couple of times. A solid support is needed, especially when using tight controls. I seldom use the locking screw when mounting heads on tripods, but this is a case where the set screws may be required.

Also note that this head will replace the utility of a gimbal head. 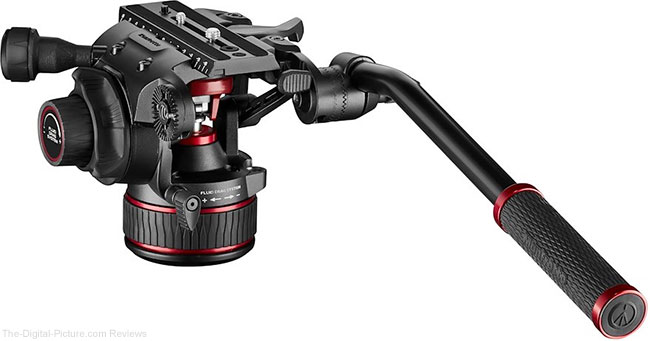 Alternatives to consider include the Cartoni Focus 8 Fluid Head also features continuous counter balance adjustment and an over 50% higher price.

The Manfrotto 608 Nitrotech Fluid Video Head features a limited 6-month warranty, extendable to 5 years with online registration (in the USA).

Manfrotto provided the 608 Nitrotech Fluid Video Head on a Manfrotto 645 FAST Twin Leg Video Tripod for evaluation. This combination is available in a discounted kit.

The Manfrotto 608 Nitrotech Fluid Video Head has a solid feature set and strong performance that promises to take your video footage to the next level of quality. While not inexpensive, the 608 costs significantly less than the superior alternatives, providing a great value proposition.