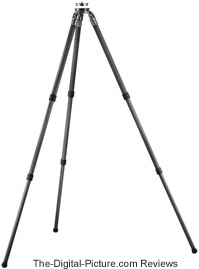 "Gitzo 6X six-layer [1.3mm tube wall thickness] carbon fiber composite tubing is 30% lighter than the previous 1.5mm generation, The Gitzo GT3530LSV 6x Carbon Fiber Tripod delivers the quality, features and performance that professionals and serious amateurs require from their camera support. I've been using a Gitzo G1327 Carbon Fiber Tripod for many years and have grown to appreciate it a great deal - It has been one of the most important pieces of equipment I own. Gitzo has refreshed their carbon fiber tripod line with the 6X Series. As typically happens with an upgraded product, features are improved and the price is increased over the discontinued model prices. 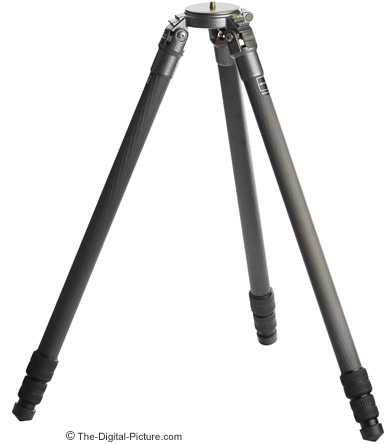 "Gitzo 6X six-layer [1.3mm tube wall thickness] carbon fiber composite tubing is 30% lighter than the previous 1.5mm generation, and features the same exceptional performance in stability and vibration absorption." I was very pleased with my already light 1.5mm carbon fiber leg tubes, but ... I'll always take better - especially lighter. The 6X leg diameter is unchanged from 1.26" (32mm). The new 3-Series tripod models are about .5 lbs (227g) lighter in weight compared to identical prior models. Carbon fiber tripod leg construction is very desired in a tripod as this material is very strong, very light and vibration-resistant. It is also kinder to bare skin in cold/hot temperatures than aluminum as because it has a low specific heat capacity.

"ALR - We have introduced a new Anti Leg Rotation system, which means the tripod can be opened in less than 15 seconds. Simply loosen all the twist locks on each leg at the same time, then pull the leg down and tighten the locks individually." Prior to this feature being implemented, the top leg lock needed to be tightened before the lower one - to prevent the middle leg section from rotating. I didn't find the old system to be a problem, but the new one is nice. This design is temperature independent - it works at all temperatures without adjustment.

"G-Lock is the new Gitzo leg locking system. The locking mechanism has been completely redesigned in order to achieve a 20% increase in rigidity, faster operation and stronger, safer locking. G-Lock’s special design also provides a “gravity lock” effect: the higher the load applied vertically to the leg, the stronger the lock." The compression within the lock increases as vertical weight is applied. The leg lock strength has also been increased in the horizontal direction - making the legs better withstand bending at the leg lock connections. Rigidity and lock strength are important for a tripod - you do not want a leg to let go with your prized gear on top. But once again, I didn't have a problem with the prior Gitzo version. The photo below shows the Gitzo GT3530S with the new G-Locks on top and the prior-version Gitzo G1327 leg locks below.

"All tripods and monopods in Series 1 and above are provided with removable rubber feet. This feature allows you to easily change worn out rubber feet or to fit other accessories, such as spiked feet or snow/sand shoes (4 section tripods in Series 1 are excluded because the final leg section is too narrow to fit these ends)." I didn't come close to wearing out my previous Gitzo's feet, but ... the ability to quickly add optional foot types is definitely an advantage to some photographers. Make sure your feet stay tight - you might want to check them periodically.

Gitzo has a wide variety of tripod sizes available in the 6X carbon fiber line - ranging from the super-lightweight 00 Series up through the super-heavy-duty 5 Series (omitting a 4 Series). Within each Series, a variety of heights, number of legs sections and column options are available. All are top quality and ideal for the tasks they were designed for. I currently have a Gitzo GT5540LS Carbon Fiber Tripod to handle my most demanding tasks but I (and many others) have come to prefer the 3-leg-section 3 Series models for most uses. My G1327 could adequately handle loads including a Canon EF 600mm f/4 L IS USM Lens mounted to a Canon 1-Series body and a Wimberley Gimbal Tripod Head II. Few of us need a tripod to handle more weight than this - but, more strength is always better. The new 6X lines gives us that - more strength. The weight rating within the Gitzo 3 Series has increased about 50% to 39.6 lbs (18 kg). These numbers are not out of line - I can hang from the fully extended GT2530 which is rated at 26.4 lbs (12 kg) - I weigh 170 lbs (77 kg). I like the extra safety factor and rigidness this strength provides.

Within the Gitzo 3 Series (models GT35xx*), 3 or 4-leg section (2-stage or 3-stage) tripod models are available and denoted by the last two digits of the 4 digit numeric portion of the model number. 30 represents 3 leg sections, 40 represents 4. The smallest leg section of the 4 leg models were generally considered to have more flex in the previous line. Within the Gitzo 3-leg-section 3 Series tripods are 3 models. The Gitzo GT3530 comes with a versatile rapid column - this model is also able to extend the tallest (to 64.6" / 164 cm). I had the rapid column on my G1327 and liked it a lot. The downside is that the rapid column can allow flexing in the system - and noticeably more vibration when extended, but overall it seemed to be an advantage to me. I have the optional rapid column on my G1548, but dislike it a lot. When locked, it is tight, but getting it locked requires a lot of strength. When loose, it does not adjust freely (carbon fiber has too much friction I guess). 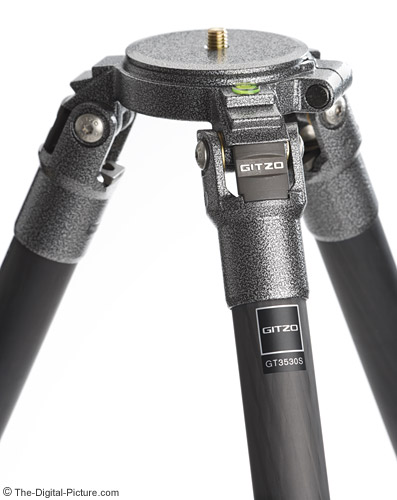 I decided to get one of the more-minimalist flat plate top models (shown above) for my 3-Series replacement. I started with the Gitzo GT3530S, but opted for the more expensive but taller Gitzo GT3530LSV 6x Carbon Fiber Tripod when a new need presented itself. Unfortunately, the "V" in LSV means video. Since I don't need the supplied metal video bowl (its a very nice part - a significant part of the extra cost I'm sure), I replaced it with the included flat plate (an easy task with the supplied wrench).

The top plate of these models is removeable should I decide to add a leveling base (with 15 degree of tilt movement around a large half ball), a rapid column or a geared column later. Gitzo calls this line of flexible tripods their "Systematic" line. The Gitzo GT3530S is the least expensive and shorter of the two flat plate models - extending up to 50.4" (128.0 cm). The "S" designation means "Standard" - not "Short". :) If you need a higher-extending model, choose the Gitzo GT3530LSV 6x Carbon Fiber Tripod for heights up to 58.3" (148.0 cm). Higher tripods are especially helpful when shooting subjects overhead from a standing position. These two models come with a useful bubble spirit level. 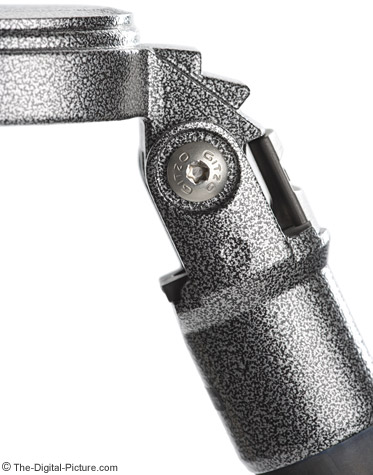 Gitzo's 6X line of tripods feature a spreaderless design - making them more reliable, fast to setup and easy to use in the most difficult situations - such as stradling a large rock. The strong alloy spider (the piece the legs attach to) and rigid legs make a spreader un-necessary.

The Gitzo GT3530LSV 6x Carbon Fiber Tripod will solidly handle any Canon camera and lens combination available - including a Canon EF 600mm f/4 L IS USM Lens mounted to a Canon 1-Series body and a Wimberley Gimbal Tripod Head II. If you are using a Canon EF 400mm f/2.8 IS Lens or a Canon 600mm f/4 IS and can afford the larger size/weight/cost of the Gitzo GT5540LS tripod, you are going to have a noticeably more solid support. The big difference will be in the amount of vibration present in the system as these combos are far below even the 2-Series weight rating. If you are using a 600mm or longer lens without tripod-sensing IS, you will probably want the GT5540LS.

The price of Gitzo 6X Carbon Fiber Tripods is not low. But, before you go running the other direction, consider this ... If you are serious about your photography, you need a good tripod. Unfortunately, most people buy a cheap tripod for their first support. Frustration often leads them to buy a better tripod. In the end, serious photographers will upgrade to a high quality tripod such as the Gitzo GT3530LSV 6x Carbon Fiber Tripod. Skip this costly upgrade cycle and buy right the first time. Few regret buying a quality tripod - a quality tripod will make you want to use it more - your photography will improve because of it.

What is a tripod good for? Better quality images of course. Stabilizing a camera/lens is the obvious benefit - and a primary reason to use a tripod. Sharp images are the result - assuming your subject(s) is(are) not moving faster than the action-stopability of your shutter speed - tripods work no magic with moving subjects. Watch out for the wind blowing the flora when shooting in lower light levels - consider panning with moving subjects. Tripods allow much longer than handholdable shutter speeds to be used - which can allow less-noisy ISO settings and wider DOF narrow apertures to be used. Depending on your shutter speed, a remote release or the self-timer will be required to avoid vibrations. Mirror lockup can also be used (vibrations from the mirror being raised are then stabilized before the shot).

A tripod has other benefits as well. Allowing you to tweak your composition - and hold it tight while you contemplate what you are looking at - goes a great distance in your final results. Need to shoot multiple bracketed exposures for digital neutral density / HDR post-processing? You need a base that doesn't move between frames. Shooting a panorama? You need a tripod to do it best.

The Gitzo GT3530LSV 6x Carbon Fiber Tripod has 3/8"-16 threads for attaching a tripod head. My current (as of this writing) choice is the Arca-Swiss Monoball Z1 Ball Head. These two make a great combination. I'm packing the combo in a Gitzo GE12P Padded Tripod Bag, but it is really tight at the spider. I need another inch of diameter clearance to be completely happy. 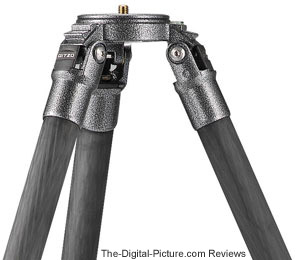 The best photographers in the world have relied on Gitzo carbon fiber tripods for their careers - for many years. The new 6X line improves on an already great product. Those using the prior Gitzo Carbon Fiber models will have to look carefully for a feature they really need/want to decide if an upgrade makes financial sense as the differences are not huge. I think the Gitzo GT3530LSV 6x Carbon Fiber Tripod is a great tripod. It functions exceptionally well and is built to hold up for the long haul.