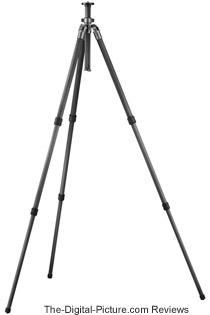 Note: The Gitzo GT2530 6x Carbon Fiber Tripod has been replaced by the Gitzo GT2531. The Gitzo GT2531 features " ... a new magnesium upper casting for a further weight reduction and a new third ultra low leg spread to take full advantage of the Ground Level Set. Series 2 tripods are also provided with the new Power Disc for a safer head lock."

Since Gitzo increased the weight ratings of their carbon fiber tripods with the new 6X Series, I wanted to find out if a 2-Series 6X model could do the same job my old Gitzo G1327 did for me. Of the available models, I selected the GT2530 (though gave serious thought to the leveling column model). 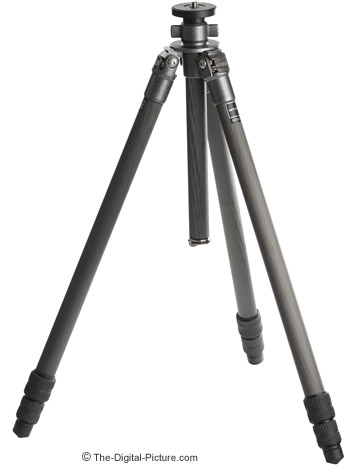 The GT2530 is the three leg section (the "30" part of the product name), rapid column version of the 2-Series line (the "25"). There is no flat base model, but the rapid column is convertible into a flat base (sans a bubble level - more later).

A common tripod feature, the rapid column, is nice to have - it allows the tripod head height to be rapidly changed within the adjustment range of the column. One adjustment is required versus 3 if the length of the legs must be adjusted - and the tripod's level-ness is not changed.

With the rapid column in place, the minimum height is restricted by the column itself. With the column fully retracted, the legs can be adjusted to the second-highest notch for a 13" (33 cm) minimum working height - if the ground is level (or concave) as the spring-retractable hook on the center column is level with the feet.

The center column on my Gitzo G1548 had to be very tight to prevent slipping. The Gitzo GT2530 6x Carbon Fiber Tripod requires much less torque to be tight - and becomes extremely hard to release if you over-torque it. Yes, I tend to over-tighten everything - and I'm learning this lesson painfully slowly.

The downside to the rapid column is the greatly increased vibration levels when it is fully extended. But, it is removable. Need to go lower to the ground? Want the least amount of vibration possible? Want to shed another 4.2 oz (120 g)? Unscrew the hook/bottom part of the rapid column and unscrew the mount plate from the top (no tools required). Use the removed bottom portion to re-attach the mount plate to the tripod legs with no rapid column between them. You get a tripod that is similar to the flat plate models that can go right down to near ground level. This is a very nice design with one exception - The lowest leg setting is 90 degrees, but this is too low to clear the bottom of the tripod's center column structure. A workaround is to position a leg in the 60 degree notch and level the camera using the tripod head. 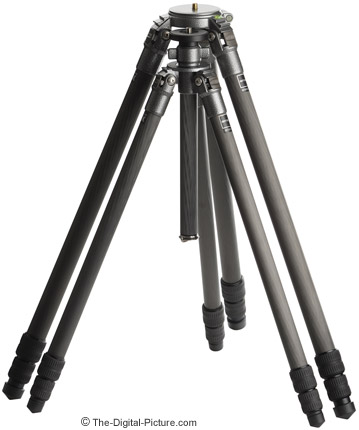 My personal conclusion is this: If the largest lens you need to tripod mount is the size of a Canon 70-200mm f/2.8 lens, the GT2530 is a great choice. For anything at or beyond the size of Canon 300mm f/2.8 lens, I strongly suggest moving up to at least the Gitzo GT3530LSV or the Gitzo GT3530S - or possibly the GT3530 rapid column version. I used lenses as heavy as the Canon 600mm f/4 IS lens on the GT2530, but vibrations are quite noticeable unless good long lens technique and IS are used. The GT2530 will work in this situation, but the 3-Series is a better option.

For lenses in between, the choice is not so clear. Lenses approaching 400mm will appreciate the extra insurance and performance the 3-Series will give you. The downsides to the 3-Series include a .9 lb (.4 kg) higher weight, a larger size (width) and a price premium.

This tripod is rated to hold far more weight than any lens Canon makes (and it has been tested to hold me), but it is vibration that causes me to make these recommendations. At 200mm, the image is very stable - at 600mm, there is a lot of jiggling. My recommendations fall in line with Gitzo's advisory as well.

The Gitzo GT2530 6x Carbon Fiber Tripod comes in an inexpensive dust bag - mine came with a small wear hole in it. Bogen Imaging (USA distributor for Gitzo) quickly replaced it for me requiring only a copy of the receipt to be emailed to them. My experience with Bogen has always been very positive. An important detail since the lifetime warranty on this tripod could mean a long relationship.

The GT2530 is a top quality tripod for your small and medium lens stability needs. I primarily used the Arca-Swiss Z1 Ball Head for a tripod head - it is a very good match.