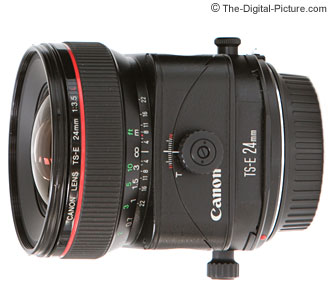 The Canon TS-E 24mm f/3.5L Tilt-Shift Lens is (update: before 2009) Canon's only L Series Tilt-Shift lens. It is a great choice for architecture and wide landscape photography.

What is a Tilt-Shift lens? Good question. While many large format system users are familiar with the concept, I hazard to say that most 35mm format users are not.

Canon's Tilt-Shift lenses feature three not-found-on-a-typical-lens adjustments. Tilt, Shift AND Rotate. These adjustments can be used individually or simultaneously to alter the relationship of the optical axis of the lens to the sensor (or film) plane.

Use this feature to selectively keep objects in or out of focus in the picture. It is surprising how much background blur a relatively slow (f/3.5) 24mm lens can produce when tilted significantly. Diffusely blur the non-subject portion of your picture to dramatically direct the viewer's eye to the subject. The tilt adjustment scale is marked in 1 degree increments. The amount of change in plane of sharp focus at the maximum tilt settings is significant. Many of the sample pictures show maximum tilt.

Shift. A shift adjustment moves the lens sideways parallel to the sensor plane. The effect of shift is perspective distortion - either correcting or enhancing as desired. The uses for this functionality are many. Shifting enables sides of tall buildings to be made parallel - instead of converging lines. Shooting highly reflective objects can utilize lens shift - the camera can be positioned outside of the reflection for the shot while the perspective remains as though it was shot straight on. Stitched panoramic photos are easy to make with the Canon TS-E 24mm f/3.5L Tilt-Shift Lens. Simply take multiple images of the same scene (without moving the camera), shifting the lens between shots. Are you unable to get the shot from the proper position because of an obstacle? Simply move to the side and shift the lens to give the perspective you wanted from the blocked position.

The Canon TS-E 24mm f/3.5L Tilt-Shift Lens' tilt and shift movements are perpendicular to each other as shipped from the factory. Canon Service can modify TS-E lenses for parallel movements (many opt for this change). Or - at your own risk - if you are mechanically inclined/daring, you can easily make this change yourself. Place the lens on its front lens cap (objective end) on a non-marring surface. You will see 4 small screws on the rear-facing side of the square middle part of the lens - one on each corner. Using a good jeweler's screwdriver, remove each of these screws. They will be tight - do not strip them. Rotate the now-loose rear portion of the lens 90 degrees in a counter-clockwise direction. Ribbon wires inside the lens dictate this rotation direction. Of course, returning the lens to perpendicular motions requires the opposite rotation. Reinstall the 4 screws to complete the project. Shading (vignetting) occurs more easily in parallel converted lenses according to Canon.

Rotate. Even though not designated as a feature in its name, the Canon TS-E 24mm f/3.5L Tilt-Shift Lens can also rotate. A small release unlocks the up-to-180-degree rotational movement of the TS-E lenses. Detents are provided at 30 degree increments and positive locks are provided at 90 degree increments. The small release lever takes a little getting used to, but the rotation function is very valuable.

These 3 adjustments are both functional and creativity-inspiring.

Significant tilt and/or shift settings - those near either ends of the scales (indicated in red on the Canon TS-E 24mm f/3.5L Tilt-Shift Lens) - may result in shading (light fall off) on a full frame body - even though the provided image circle is larger than a full frame sensor (24x36mm). When mounted on a 1.6x or 1.3x, the shading will not be nearly as significant. Using a smaller aperture opening helps minimize the shading. These settings may also result in metering errors up to at least 1 stop. Meter the shot before tilt and shift settings are moved from their zero positions. Then keep an eye on your histogram and make any adjustments necessary.

Both tilt and shift setting adjustments can be prevented or allowed by tightening or loosening a small (far too small) captive lock knob opposite the respective tilt and shift adjustment knobs. Although I think the locks are a good idea, they are insufficient for preventing accidental setting changes in my opinion.

All Canon TS-E lenses use good old fashion manual focus only. Manual focus at a wide aperture setting is easy to miss with the standard focusing screens shipping on Canon's current DSLRs. Alternative focusing screens (including at least one with parallel lines) are available to make this task easier. Canon's Angle Finder C would also help. Live View helps tremendously with this task. If the tilt and shift settings are both at their zero settings, the viewfinder focus indicator will illuminate (and the focus-achieved beep will sound if turned on) when manual focus is properly achieved. Shifting does not affect focus.

The Canon TS-E 24mm f/3.5L Tilt-Shift Lens is not stellar in terms of sharpness. I found it to be the least sharp of the three Canon TS-E lenses. It is slightly soft wide open but very sharp by f/5.6 - corner sharpness is good even on a full frame body. I found it to be on par with the Canon EF 16-35mm f/2.8L Lens at similar apertures. The TS-E 24mm may have a slight advantage at and beyond f/5.6. The TS-E 24mm was somewhat sharper in the corners, but still showed some extra corner softness wide open (on a full frame body). Sharpness decreases as the lens is tilted - and decreases more rapidly as the lens is shifted. Remember that sharpness isn't everything.

CA (Chromatic Aberration) is a bit of a weakness for the Canon TS-E 24mm f/3.5L Tilt-Shift Lens - especially in the corners on a full frame body. CA becomes more noticeable as the lens is tilted/shifted. Slight light fall-off is noticeable through f/4 even without tilting and shifting. Slight barrel distortion is detectable at close distances on a full frame body. Flare resistance seems decent, but the hood is not a big help in many situations.

The Canon TS-E 24mm f/3.5L Tilt-Shift Lens' build quality is very good - not unusual for an L lens or a TS-E lens. Although a medium-small sized lens, the TS-E 24mm is a very solid 1.3 lb (570g). The focus ring is nicely sized and very smooth - the lens does not extend while focusing. Both distance and full depth of field scales are provided. All current TS-E lenses feature 8 aperture blades.

Although I have not seen Canon specify the compatibility, I was able to successfully use the Canon EF 1.4x Extender II with the Canon TS-E 24mm f/3.5L Tilt-Shift Lens. Autofocus is of course not affected as there is none to begin with. However, the correct aperture and focal length information are not reported to the camera. Exposures are fine - image quality is also decent. I did not have one at the time, but I don't see why the Canon EF 2x Extender II would not work as well. Extenders definitely add to the versatility of this lens.

Use the Canon TS-E 24mm f/3.5L Tilt-Shift Lens as a normal 24mm lens (a manual focus one of course) or adjust the tilt, shift and rotation to creative perfection. Plan on needing some behind-the-camera time to get used to the adjustments and capabilities of this lens. A digital body will be a huge help in understanding the exposure variances. I recommend using a tripod or other steady support - especially when adjusting the shift functionality. Of course, photography has few rules.

I mentioned earlier that architectural and landscape photography are common uses for this lens. People are another good subject for the Canon TS-E 24mm f/3.5L Tilt-Shift Lens - just don't get too close as there is not an adjustment to make noses smaller. Environmental and group portraits however work well. Keep a subject's eyes and the part of his/her environment you wish to emphasize in focus. Or for a group picture, keep all of your subject's eyes in focus even in low light at a wide aperture setting.

The Canon TS-E 24mm f/3.5L Tilt-Shift Lens inspires creativity. The results can be stunning. If you are looking for a simple point and shoot lens, a TS-E lens is probably not for you.

My Recommended Canon TS-E 24mm f/3.5L Tilt-Shift Lens Retailers
Check used inventory at MPB
(Using the links on this site to make any purchase provides support for this site)
The Tip Jar