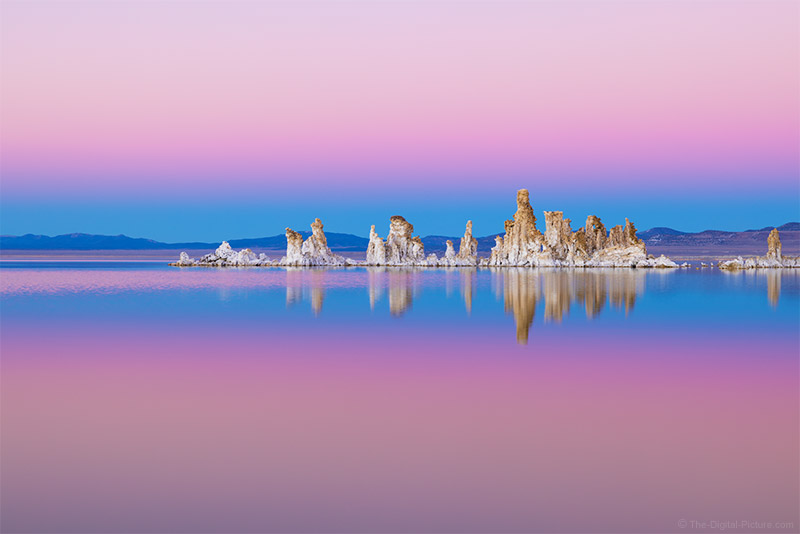 I was in Lone Pine, CA and the Alabama Hills facing the prospect of a clear sky at sunset. While blue is one of my favorite colors, some clouds in the sky with a fiery glow are an even better end-of-the-day option.

The sun setting in a clear sky casts a beautiful warm light, ideal for landscape imagery. However, the Sierra Nevada Mountain range, including 14,505' Mount Whitney, the highest mountain in the contiguous USA, blocks the warm color temperature of the late-day sunlight long before it reaches most of this valley and its formations.

There is one reliable way to get a colorful sky during a clear sunset. The Belt of Venus will rise opposite the sun with the earth's shadow following it, and reflecting the Belt of Venus in a body of water doubles the available color.

Mono Lake is over 2,600' higher than Lone Pine, CA, home of the Alabama Hills. This location has a less-obstructed west view and lacks the close tall mountains to the east. That combination provides early visibility of the Belt of Venus, where it appears strong in color

Photographing the tufa tower limestone formations at Mono Lake Tufa State Natural Reserve had long been on my to-do list, so the second round of adventures for this day began.

Upon arriving at the lake, the car thermometer said it was cold out — upper 40s or low 50s? However, it was too hot in the sun to dress warmly.

I opted to go light, grabbing a tripod, two cameras and lenses in Lowepro toploader cases, and no extra clothes. The plan was to scout for the optimal sunset shot, return to the car for everything else, and then capture the selected sunset scene.

After finding a location that worked for the reflection plan roughly a mile into the adventure, I no longer had the energy to make the rather difficult two-mile round trip to retrieve the warm clothes (and flashlight).

The expected temperature drop was a concern, but I was still very warm. The neutral density filters were still in the SUV, but the smooth water left nothing moving to blur.

Eventually, the sun went low in the sky, the tufas had warm light on them, and many photos were captured. However, the real show began when the Belt of Venus and the earth's shadow moved into view. The Belt of Venus and its reflection nicely framed the tufa formations and their dark blue earth shadow background. This show was over in minutes, but working fast with two cameras provided many image variations within this timeframe.

The show would have been over fast regardless of the sky progression because the temperature plummeted into the 20s as soon as the sun set, and shivering made tripod use mandatory. As the dirt road was closer than the car (and the flashlight was in the car), I opted for a direct path to the road, expecting that the opportunity for getting lost would be reduced and hoping that firmer footing would be gained. It didn't take long for this decision to be deemed questionable, and the "Would anyone ever find me if I went down in the massive, over-my-head sagebrush that I was climbing over?" question entered my mind.

Fortunately, the story has a happy ending, and the Belt of Venus provided the desired sunset color on this evening. Keep this sky color option in mind for your next clear day sunset — or sunrise — shoot.