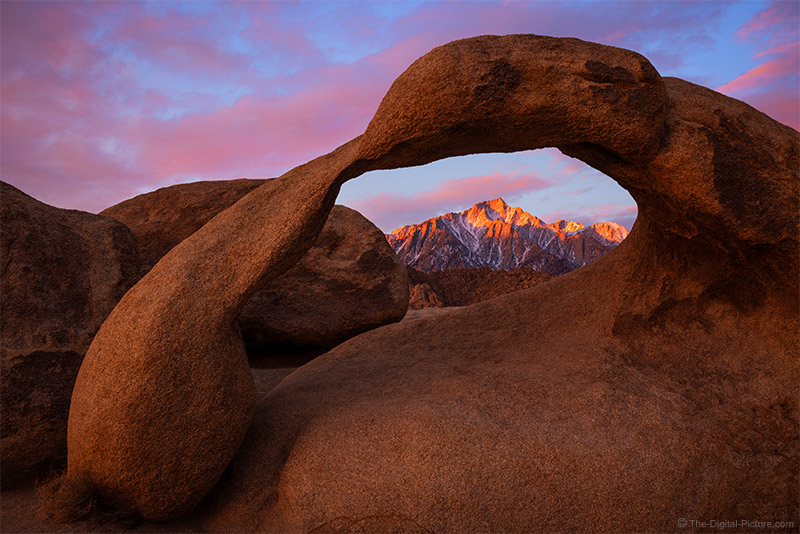 What should an outdoor photographer photograph in the winter? Rocks keep their same great appearance year-round, making them a great option.

Sunrise at Mobius Arch in the Alabama Hills was at the top of my subject list for a recent California landscape photography trip. With weather being unpredictable, three mornings were allocated on the schedule to check off this line item.

A scouting run the evening before set up the first-morning shoot, ensuring that I wouldn't get lost in the dark. Some images featuring a cool sunburst within the arch made the scouting time especially productive.

On the morning, the sky was clear. A clear sky can usually be counted on to produce a nice alpenglow on the highest peaks, and Lone Pine Peak lit up nicely under the arch this morning. The blue sky provided an attractive, undistracting background for the arch, and as the sun rose higher and the alpenglow faded, the entire snow-capped mountain glowed nicely within the frame of the arch. Eventually, the entire arch was in direct morning sunlight for another pleasing variation.

Overall, day 1 was good, but the forecast for day 2 included 40% cloud cover. The higher the cloud cover percentage, the lower the chances of the sunrise light making it to the western sky. That means lower chances of good sky color and reduced potential of the alpenglow lighting.

However, the higher the cloud cover percentage, the greater the potential for sky drama when the light makes it through. Overall, a 30-60% cloud cover forecast is optimal for high odds of a colorful sunrise (or sunset). So, the day 1 plan was repeated on day 2, anticipating the potential for a color other than blue in the sky.

As seen here, the results of that decision proved quite nice. Intriguing is that all of the work of a good morning can be relegated to the archives when a better image capture comes along.

For this composition, the strategy was to move away from the arch as far as possible make the distant Lone Pine Mountain peak appear large relative to the arch framing it. However, this goal was limited by a relatively small area of rock to work from. A Canon EOS R5 and RF 24-70mm F2.8 L IS USM Lens were mounted to a Really Right Stuff BH-40 Ball Head on a TVC-24L Mk2Tripod. The tripod legs were spread outward, straddling a large crevice between boulders. With a 10 or 12' (3 or 4m) drop-off immediately behind the tripod, aligning the frame was somewhat challenging, and determining the perfect focus distance to keep everything in the frame sharp at 31mm was more so.

Trial and error prior to sunrise dialed in the first challenge, and the R5's focus bracketing set to the lowest distance adjustment between shots provided a completely sharp image every time the shutter release was pressed. When longer focal lengths resulted in an insufficient depth of field, the multiple images in the stack ensured that all features, from nearest to farthest, were in sharp in at least one of the frames, with the depth compositing tool in DPP standing ready to merge those results.

While I may not get around to sharing any images from the first morning at this location, day 3 resulted in variation that I'll likely share soon.