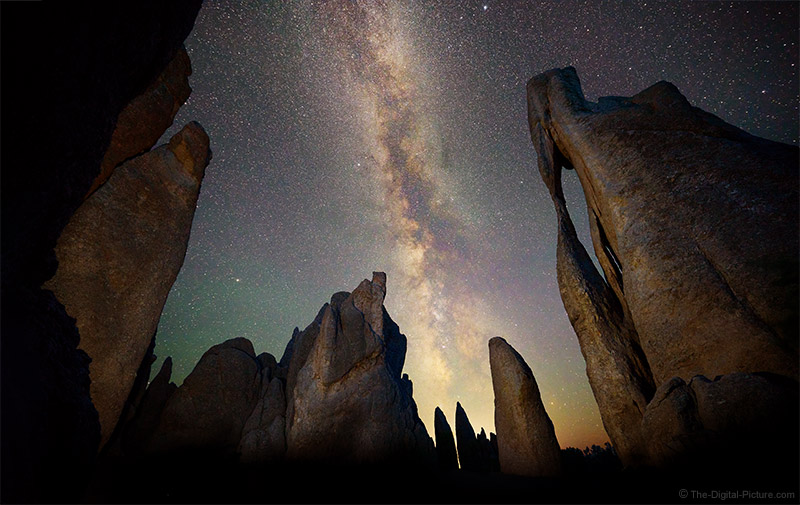 I scheduled three days to photograph Custer State Park in South Dakota. Those three days included two significant travel days and followed a nearly 1-week-long photo trip in Badlands National Park. On that day, the plan was for my daughter and I to scout from Spearfish Canyon down into Custer State Park.

Upon arriving in the park, the highest priority was to scout a milky way photography location in The Needles, featuring incredible rock formations. A Needles Highway closure foiled that plan. An unfortunate person's camper was stuck in the Needles Tunnel, a peril relatively easy to encounter in this extremely narrow tunnel.

After checking in to the hotel mid-afternoon and grabbing a bite to eat, my daughter and I drove the Custer State Park wildlife loop in search of wildlife subjects. That endeavor was mostly unproductive, with only the donkeys cooperating on this evening.

Exhausted from driving all day (and a rough schedule for the prior two weeks), we opted to sleep in the next morning. With the camper now extracted from the tunnel, the original Needles Highway scouting mission was completed late on our only full day in the park. The perfect position was established, and with help from The Photographer's Ephemeris and a compass, it was determined that the milky way would ideally align just before 3:30 AM, just before the sky started brightening in the morning (nautical start).

Hotel checkout was in the morning, and a 7-hour drive to the airport was on the must-do list. Thus, a reasonable amount of sleep was required for a safe drive. However, the National Weather Service forecasted the clouds to (finally) dissipate at approximately 2:30 AM, the already set moon meant that the sky would be dark, and I couldn't pass up this opportunity. So the alarm went off at 2:30 AM. We jumped into warm clothes and drove to the selected site.

While it was the middle of June, the air temperature was low and the sustained wind speed was extremely high. Tucking into the rock spires helped reduce the felt wind, and the high-performing Really Right Stuff TVC-24L Mk2 Tripod and BH-40 Ball Head combination took care of the remaining stabilization requirements. Every frame the Sony Alpha 1 and Sony FE 12-24mm f/2.8 GM Lens captured on this shoot was tack sharp.

Upon establishing the ideal composition, with manual focus on the stars, images were captured in quick succession (as quick as 25-second exposures permit) to ensure the perfect alignment among the needles spire formations, including the Needles Eye, was captured. Also captured was an increasingly bright blue sky, providing a range of options to choose from later. As the new day dawned, the sky continued increasing in brightness, with the foreground brightening as well. Once the milky way had passed through the optimal alignment among the spires, it was time to do some light painting for foreground compositing options.

My light painting flashlight of choice is the Black Diamond Spot 325 Headlamp. This small, lightweight headlight is an excellent all-around choice for outdoor photographers, featuring an extremely bright spot light for navigating in the dark, a red light for preserving night vision, and lower-power floodlight that casts a wide, even light, perfect for many uses, including light painting. The duration of the light panning across the scene was informally measured by counting and adjusted from frame to frame to create varying brightness options.

To gain improved directionality to the light painting, the flashlight was positioned around the far side of the nearby rock spire. The 10-second self-timer provided time to run to this position after the shutter was released.

At 4:00 AM, the milky way was no longer visible. Tired but exhilarated, we packed up and headed back to the hotel for second bedtime.

As so often is the case, the memory of the tiredness, coldness, and effort required for this shot was short-lived, already faded. However, the photos and positive memories will last a lifetime.

Note that a benefit of shooting at this time of the day was that, not surprisingly, we didn't see another car or person during this entire shoot.