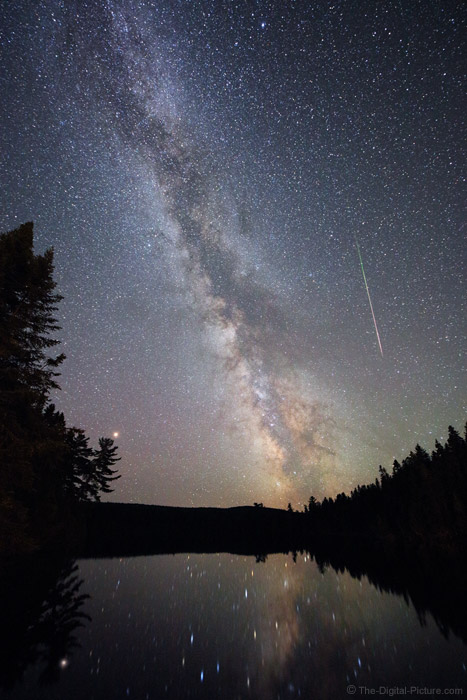 Welcome to Island Pond, located by Red River Camps in Deboullie Public Reserved Land of T15-R9 in the North Maine Woods. That this location is a nearly 1-hour drive from the grid and paved roads should help set the scene. Along with natural beauty, what you get here is a dark sky and at this time in August, a beautiful view of the Milky Way and the annual Perseid Meteor Shower.

Aside from the effort required to get to this location, this was a very easy image to create.

The camera continuously captures images, hopefully with perfectly-positioned meteors in them. These frames can also be made into a time-lapse.

After setting up the first camera, you have plenty of time, so set up a second camera the same as the first, capturing a different composition.

On this night I had three camera setups with four of what I consider the best night sky lenses available. One of the cameras was a Nikon model and the only Nikon-mount star-capable lens I had along (not a Nikon model) showed a serious image quality problem, leaving two cameras in operation.

I mentioned that the 30-second exposure was a stretch and that is what happens to the stars at this focal length, exposure duration, and imaging sensor pixel density combination. They get stretched.

A blur is created when details in an image move across pixels on the imaging sensor, regardless of the reason why that happens. As we all know, due to the earth's rotation, stars are moving across the frame when the camera is in a fixed position. The longer the exposure, the more they are magnified (longer focal length lens) and the higher pixel density the imaging sensor has, the more that star blur will be visible at the pixel level.

Note that when final images are viewed and compared, the imaging sensor's pixel density-caused blur becomes equalized. For example, if you are printing at 8" x 12", the pixel density factor no longer matters in regards to the star trail blur created by two different resolution, equal-sensor-sized cameras.

Also, note that not all stars move at the same rate relative to the camera position. For example, the North Star (Polaris) does not move at all. If you are primarily including the northern sky in the frame, you might be able to use longer exposures than if your camera was directed west, east or up. There are star blur rules that can be helpful, but photography skills rule. Analyze your results as soon as they are captured and make adjustments as needed.

I mentioned having 4 of my favorite star lenses along with me. They are my favorites, but the perfect star lens, at least from a lens in the realm of affordability for most individuals, does not exist. All lenses have at least some issue keeping them from reaching perfection and corner performance is typically their biggest limiting factor.

This image was captured with the Sigma 14mm f/1.8 DG HSM Art Lens. It is a great choice for this purpose.

For star photography, ultra-wide angles are helpful for taking in a greater area of the sky and allowing longer exposures before star trails become visible, though ultra-wide angles produce rather small stars. Ultra-wide apertures (that produce sharp enough image quality to be used) create a brighter image in less time or at a lower ISO setting. The Sigma 14mm Art lens has those two features.

The worst case: even if the entire night's shoot was a failure, just hanging out under a starry sky would be totally worth the time and effort.