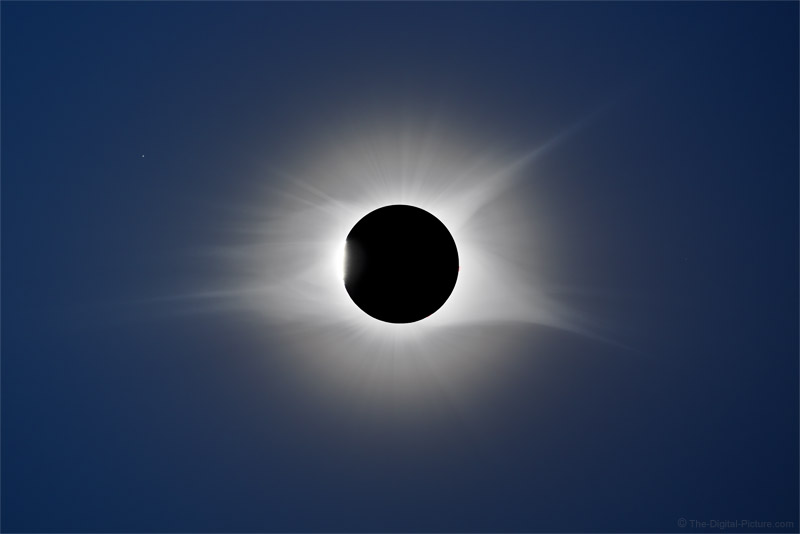 One of my goals for the 2017 Total Solar Eclipse was to bracket exposures ranging from no-blown-color-channels to as bright as I could create. Using three custom modes set for AEB (Auto Exposure Bracketing), I was able to capture 21 images with exposures ranging from 1/8000, f/8 ISO 100 to 1 sec, f/4 ISO 800, covering over 18 stops of exposure difference.

You may have noted that I was using an f/2.8 lens and could have opened up one stop wider. I decided that vignetting at f/2.8 took away most of the wider aperture advantage in the periphery and, with the sun creating the most light in the center of the frame, the periphery brightness was what I needed most from this frame. So, I opted to stay with f/4.

A number of the darkest images in the set proved too dark to be useful. In the brightest image, all three channels were blown in nearly half of the image. Thus, I felt successful in meeting that goal.

There was of course a purpose to that goal and that purpose was to create an HDR image that made as much of corona visible as possible. While I also had a 200mm lens deployed with the same purpose, the 400mm angle of view fully contained the maximum corona able to be captured under the slightly hazy Tennessee skies.

To create this image, I stacked 14 exposures using (essentially) the solar eclipse bracketing procedure I recently shared. I think that I could continue tweaking this result indefinitely, but ... it is time to label it "finished" and move on to all of the others.

In this case, you could say that I got a "star" for effort.