Spring Garden Street Bridge View of the City of Philadelphia 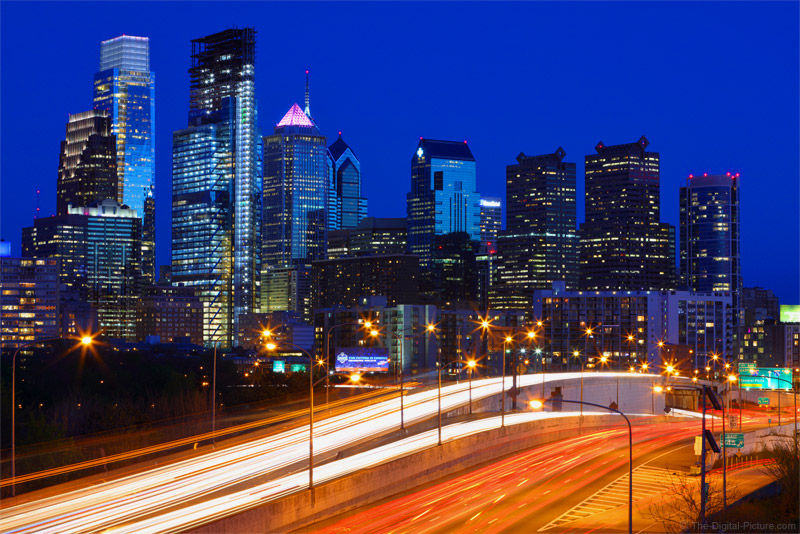 When planning for a big photo daytrip, I usually have a packed-full itinerary carefully planned out and select the day based on the desired weather matching the forecast along with various other factors. But, sometimes even very careful planning does not work out.

This particular day had set up perfectly and I executed the plan, making the roughly 6-hour round trip drive to Philadelphia.

Upon arrival, I immediately discovered that preparations for the NFL Draft ceremonies, including installation of multiple enormous covered stages, had completely taken over the art museum, including the parking area I was planning to use. The backup plan was implemented for parking and the art museum, one of my intended subjects, quickly hit the questionable list.

The morning and early afternoon were forecasted to be cloudy and I drove in rain during much of the trip into the city. While that might not sound like the ideal forecast for city photography, the cloudy skies were going to provide ideal light for interior photography at a large church. Soft light coming in the windows would add life to the interior, but direct sunlight burning highlights into an image would be avoided.

Upon arrival at the church, I found the doors ... locked. The church's website said it would be open. The city employees watching over the area contacted their superiors and were told that the church was supposed to be open. Some church employees were even trying unsuccessfully to get in. About two hours later, the church was still locked and I gave up the wait, moving on to scout for later opportunities.

A blue hour ultra-wide angle view of the art museum entrance was on my to-photograph list for the day, so this was the next shot to be scouted/planned for. Because this view faces somewhat into the setting sun, the ideal blue hour timing was slightly later than another blue hour photo I had planned. I worked through the NFL Draft construction project and a security worker permitted me to go to the top of the art museum steps (the ones "Rocky" climbed) behind the main NFL Draft stage. Unfortunately, upon arriving at the top of the steps, I discovered more large tents covering most of the main entrance. Scratch primary photo #2 from the list.

Scouting the view from the Spring Garden Street Bridge was next on the list. The goal was to photograph the downtown skyscrapers bathed in the warm late day light and a clear sky to the west was needed for that. The skies were forecasted to clear in the afternoon but I was not optimistic of the clearing happening in time. Finally, in late afternoon, the heavy clouds quickly moved past, showing a beautiful blue sky.

I arrived at this location quite early and set up two tripods with a pair of Canon EOS 5Ds R cameras with Canon EF 24-70mm f/2.8L II and Canon EF 70-200mm f/2.8L IS II lenses mounted. I waited, watching the perfectly clear sky with highly anticipated success, but alas, just minutes before the sweet light happened, a cloud bank rolled in and shut down the light, erasing major photo goal #3.

With three of five planned image series already failed, the day was not shaping up well, but two photo goals remained. Fortunately, the cloud bank that shut down the city-in-sweet-light image did not make it past the city before darkness and photo opportunity #4, the image shared here, was a home run.

The ideal blue hour light only lasts a few minutes and the ideal time is often easier to best-determine when reviewing the images on a computer at home, so I simply shoot constantly through that short time window. However, a clue to when the time is ideal is when proper f/16 exposures are between 15 and 30 seconds.

Why f/16? Live View with DOF preview showed that I had enough depth of field at f/8 and the images would have been sharper if captured at that aperture, but ... I like the star effect that a narrow aperture creates from the city lights. The straight lines from the city buildings sharpen nicely even at f/16 and I seldom regret this aperture choice for this purpose.

Because I was shooting from an elevated bridge, the camera was able to be leveled (for both pitch and roll), a requirement if keeping the edges of the buildings vertically straight is desired. Another takeaway from this image is that telephoto lenses are great for cityscape photography. Telephoto focal lengths keep distant subjects large in the frame and the city skyscrapers were a primary subject, so keeping them large was desirable.

With the blue hour past and a good set of images captured on two cameras, it was time to make photo #5 happen. The goal was a nighttime photo of City Hall from the center of S. Broad St. and getting there required a 1.6 mi (2.6km) walk. I had been carrying a heavily-loaded MindShift Gear BackLight 26L (including two tripods) all day, but ... whatever it takes is the motto of many photographers. I could rest on the drive back home.

Upon arriving at City Hall, I discovered huge – you guessed it – NFL Draft banners adorning each side of City Hall. While a photo with the banner may have been good for memories of the event happening in this city, it was not what I wanted. I was tired and opted to simply walk back to car.

So, out of 5 potentially great series of photos, I brought only one home with me. While that batting average is not very good, I'm happy with the images I did get and another positive spin is that ... I will not need to do much research to make another day-filled photo itinerary for this city with a hopefully-more-productive result. Alas, the NFL Draft will forever be a memory as there it is, advertised on the large blue billboard near the center of every frame I captured here.