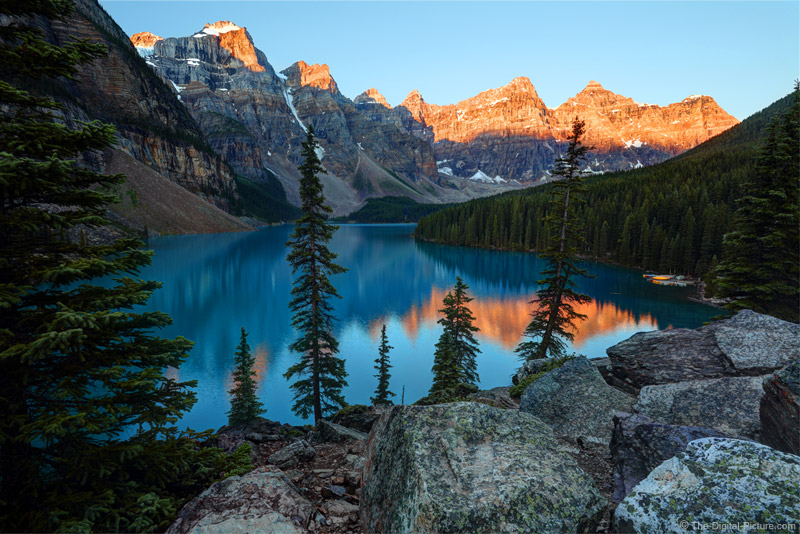 One of my primary goals for my time at Moraine Lake was to capture the warm light from the rising sun hitting just the top of the mountains with the amazing blue lake reflecting the same. The scene I was visualizing required a very clear sky to the east, allowing the sunlight to reach the mountain unimpeded/undiffused. The other important factor was wind – I needed there to be none of it. I had three mornings for everything to come together.

Capturing this scene of course meant being in place and ready to go before the sun rose. On the first morning, having never been there before, I not only needed to find the lake, but needed to hike to (find) and climb up the Rockpile (via a trail) followed by scouting – all in the dark. Well, in the dark but with the help of a super-bright SureFire Maximus Headlamp. As incredibly bright as that light is, I was not going to be lighting the distant mountains and it was a guess as to where the sunlit mountain peak reflections were going to fall in the lake.

I picked what seemed like a great position, with a distant glacier framed between the trees, some nice boulders in the foreground and the overall scene nicely framed and bookmarked with a pair of large evergreen trees. After setting up a Canon EOS 5Ds R with an EF 11-24mm f/4L Lens on my primary tripod, I set up a second 5Ds R with an EF 16-35mm f/4L IS Lens mounted on my travel tripod a short distance away. The plan was to go back and forth between the cameras, rapidly capturing multiple compositions with immediate redundancy available if a problem was encountered (it is called the Rockpile for a good reason and I had one very close call).

The weather proved ideal and everything was looking great until ... I realized that the mountain peak reflection was being cut off by the foreground. I immediately abandoned the carefully selected locations, running across the rocks with the primary camera setup to quickly find a better position. There was no time to waste because the sun line moves down the mountain very rapidly.

While I have a large number of images I like from my three mornings at Lake Moraine, this one, one of the first ones I captured on the first day, remains a favorite. The sun line had moved down the mountains slightly farther than I originally visualized, but ... I may actually prefer this version better. While simply having that preference adds to the satisfaction of achieving the goal, I really do think that I like this scene better. With more of the mountain in the still-very-warm sunlight, there is more desired color in the frame and more of the peaks are being lit than when the first light hit only a couple of the peaks.

This is an HDR image. Because, as I mentioned, the line of sunlight moves quickly down the mountain, it is important to capture the HDR frames in very quick succession in this situation. My preference is to use AEB (Auto Exposure Bracketing) with the camera in high speed burst mode. I used Live View to gain mirror lockup and used a locking remote release to complete to capture. Lock the release down and quickly go to the second camera. Quickly check the results, fine tune if needed and repeat.

For processing the HDR image, I used a combination of Photomatix (the best HDR software I've used) and manual blending in Photoshop.

While 4-5 hours of sleep three nights in a row is not a good habit from a physical or mental health standpoint, I'm sometimes willing to make that sacrifice for a good image. While that effort is not always rewarded with a great photograph, the disappointing efforts serve to make the successful ones even more special. Fortunately, disappointment didn't happen in this location.