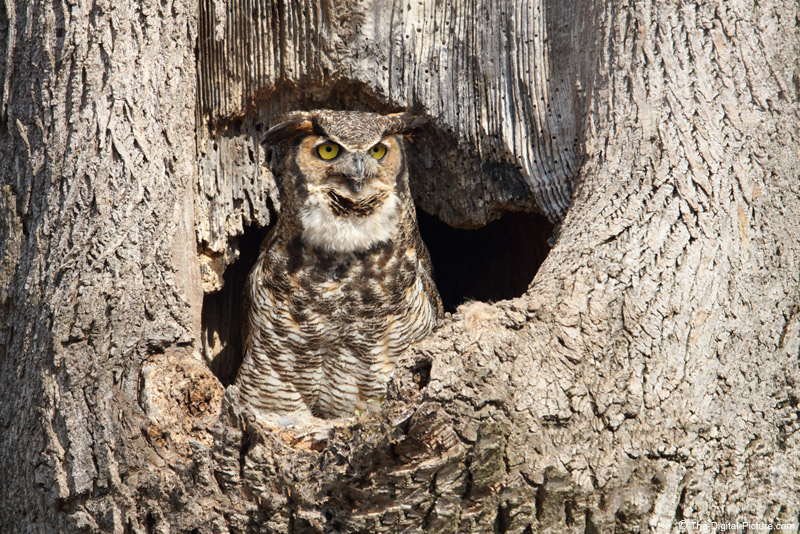 This mother great horned owl may be the most popular and most photographed of its species in the Mid-Atlantic states at this time. Being able to photograph a primarily-nocturnal bird, very visibly sitting in its nest throughout the day, is an unusual situation and MANY photographers took advantage of this opportunity. I made this opportunity a priority and carved most of a day out of my schedule to get my great horned owl photo.

The viewing area of this nest is in a public park with a significant bank and stream separating viewers and the owl family (two owlets are deeper in the cavity). This meant as much focal length as possible was needed in front of a full frame camera (and a significant amount in front of an APS-C model). For me, this meant the Canon EF 600mm f/4L IS II USM Lens in front of an EF 2x III Extender along with the ultra-high resolution Canon EOS 5Ds R.

While this uncropped image indicates a clear view on the nest cavity, that was not completely the case. Getting the right position for a semi-clear view of this owl was challenging and I spent much of this day leaning to the side so that I could use a tripod position immediately next to another cooperative photographer for the best-available view. My primary concern was getting a clear view through the tree branches on my side of the creek as these branches became very defocused and lowered contrast over a significant portion of the image if in the frame. The branches on the nest tree were of a lower concern as the healing brush in Photoshop made branch removal a trivial task.

While the owl spent most of the day sitting nearly motionless, it occasionally changed positions. When a loud motorcycle came into the park, the mother great horned owl showed her personOWLity, making for one of my favorite shots of the day.