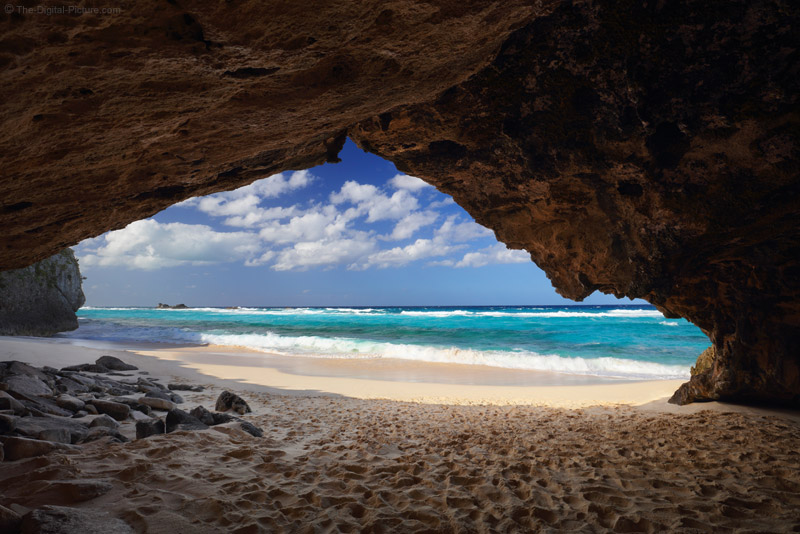 Warning: You might want to go here. "Here" is Mudjin Harbor in Middle Caicos (Turks and Caicos, British West Indies), where there are surprisingly few people and the scenery is amazing. Capturing my attention for the large part of a day were the large cliffs and the rugged landscape bordering the brilliant turquoise waters of the Atlantic Ocean here. And, who is the landscape photographer that can pass up a cave framing the ocean?

By moving deep into this cave and zooming the Canon EOS 5Ds R-mounted Canon EF 16-35mm f/4L IS USM Lens out to 16mm, I was able to completely frame some of the most-beautifully-colored water found anywhere.

Caves are (usually) very dark and that was case here. This image is composed of three separate exposures – one for the water and sky (slight blinkies in cresting waves), one for the cave walls and another for the upper right portion of the cave wall as it was even darker and needed some detail brought out. With a handful of exposure variations available, I experimented with differing cave wall brightness during post processing. In the end, I opted for noticeable walls, but not bright enough to distract from the idyllic beach and water scene being framed.

Because the sun is constantly moving, multiple exposures intended for combining via HDR that include a shadow line should be captured in quick succession due to that line moving. The always moving and always different waves determined the primary exposure timing. The other exposures were simply captured very close in time to the primary ones.

A circular polarizer filter played an important role in capturing this image, making the sky and water colors pop.