12mm Environmental Portrait and The Making of My First Selfie 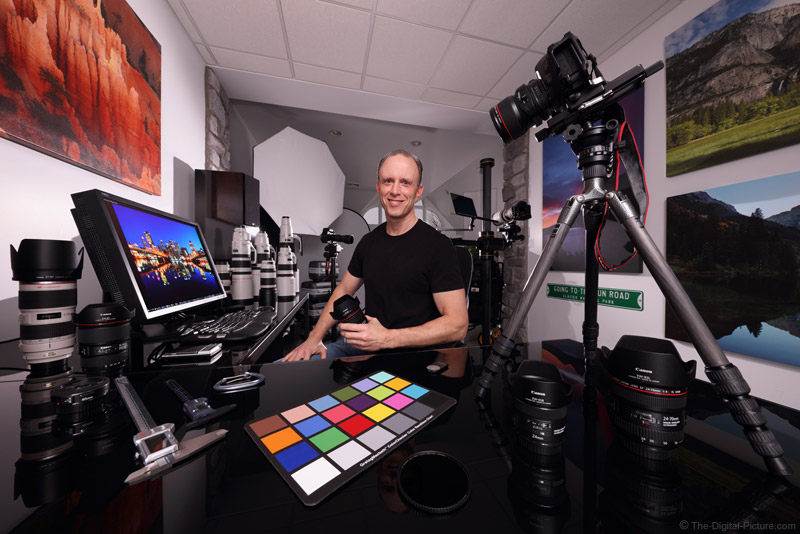 I'm not focused on me, can be accused of under-marketing myself and until very recently, I had never taken a selfie (at least not one shared beyond the immediate family). Of course, when the request for a portrait came in, I didn't want to under-deliver on the effort and set out to have some fun, creating my first selfie. Since the task turned into a major project, I thought I would share some of the undertaking.

I know, I gave away the focal length choice in the title and right away some of you are thinking that I've lost my mind. The 12mm focal length, and anything close to it, is not going to create a pleasing portrait perspective, right? Not necessarily. Perspective is created by distance and, if you are far enough away from the subject, any rectilinear focal length can work (I'll save the fisheye discussion for another day). The 12mm angle of view includes a lot of environment in the frame at that adequate distance, and that was my goal for this shot.

I should mention that human subjects tend to look best closer to the center of an ultra-wide angle frame, avoiding the stretched look that can be present in the corners. Keeping the camera level (both pitch and yaw) also helps keep perspectives looking reasonable in this image, though you can still find some stretching closer to the borders. For example, the white lens on the left appears somewhat wide.

I stopped short of making this image into an I Spy photo, but there are lots of (hopefully) interesting items in this photo. Some are easy to see and some are more obscure (such as the Multicart R12RT loaded with camera backpacks). Overall, I tried to keep the image borders free of lines, fully containing most items in the frame. I also attempted to position the closest lenses so that the hoods were directly aligned with the camera with the hood lines mostly clear of intersecting lines, making them stand out, including the one in my hand.

After "decorating" my workspace (my wife's reference to what I was doing), I positioned the camera for the composition I was envisioning. Then, I started pulling out Speedlites.

For the main light, I opted for a Canon Speedlite 600EX-RT Flash with a Photogenic Eclipse 60" Umbrella positioned mostly above the camera. This setup provided a soft light over the entire foreground. To reduce the remaining shadows, a second 600EX-RT, with the wide angle diffuser down, was directed into a 30" umbrella positioned behind the camera. This flash was below the first umbrella and acted as a fill light. Note that it is a good idea to use the camera's eyepiece shade/shutter when firing a flash into the back of the camera (especially if using E-TTL metering).

I added a third 600EX-RT on a backlight stand behind me with the unmodified flash firing directly toward the camera. This light provided some rim lighting that helped to separate me from the background and lit up the middle layer of the image including some strong reflections.

The last Speedlite, a Canon 430EX III-RT, with its wide angle diffuser down, was placed on the floor deep into the studio. This flash's job was to keep the background from going dark.

While I ended up selecting this image for use, I also photographed with other camera positions and lighting variations. One change that I liked was moving the background-most flash under the desk and aimed at the left wall seen in this image. This added a pop of brightness that created some stronger lines in that area of the photo.

The Canon EOS 5Ds R was tripod-mounted and the tripod was placed immediately against the edge of the desk and triggered via a Canon RC-6 wireless remote. See it on the desk in front of me? I would press the release button, put the release on the desk and grab the lens in time for the 2 second self-timer trip the shutter.

I photographed this image in three exposures. The primary f/11 exposure was selected to keep the cloudy sky properly exposed (this exposure happened to be convenient for the overall image) with the flash output, controlled by a Canon Speedlite Transmitter ST-E3-RT, adjusted to balance the overall image.

A second exposure utilized a more-diffraction-softened f/16 aperture for keeping the closest subjects in better focus and the third exposure was 4 seconds, necessary to capture the image on the monitor. The three images were composited in Photoshop.

Note that ISO 200 was used to increase battery life in the flashes (18 AA batteries in use, I used two sets).

So, that is the story of my selfie. If you are interested in capturing a selfie of your own, be sure to check out Sean's guide to self-portraits in the site's photography tips.