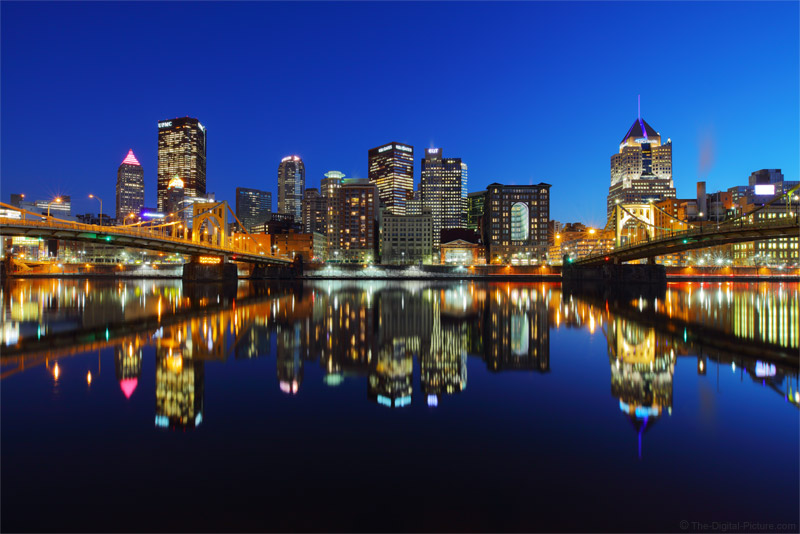 Pittsburgh, home to three rivers (Ohio, Alleghany and Monongahela), is also home to great reflections and many bridges. The reflections of the city, however, are usually color blurs due to wakes from boat and barge traffic. Thanks to the wave-rebounding solid vertical river walls, the waves seem to never dissipate and when planning this long daytrip, I was visualizing a creamy-smooth river of color during the blue hour and later. What I found on this day was ... no boat traffic and very different images than I had visualized. Different in a good way, I think.

The most difficult part of this image capture? Being there.

To take the actual picture, I simply stood on the north shore of the Three Rivers Heritage Trail river walk, centered between the Robert Clemente and Andy Warhol bridges, set the aperture to f/16 to get the star burst effect from lights, adjusted the framing to level (both pitch and yaw to keep the buildings and their reflections vertically straight) and pressed the shutter release (mirror lockup with 1 second delay).

The RAW file post processing was not challenging. In DPP, highlights were reduced (-5), shadows were boosted (+5) and saturation was added. While this result was very good, I opted to brighten the reflection in the water slightly (1/3 stop) using a simple HDR process. Two 16-bit TIFF files were created (one at -.83 EV and one at -.5 EV) and combined in Photoshop.

Being in Pittsburgh for the day meant renting a car the night before (4 drivers with 2 cars is not working so well), driving 4 hours, hiking roughly 3 miles with a full MindShift Gear BackLight 26L (including two tripods, extra cloths, food and water) and overall, being outdoors for 9 hours with temperatures in the teens and twenties (°F). I arrived home at 2:30 AM and got up to return the car in the AM.

The beauty of our brains is that, in a few days, the only thing I will remember is having spent a great day in a beautiful city and the images will last for a lifetime. I'm ready to go back.

Another beauty is the Sigma 20mm f/1.4 DG HSM Art Lens that I was "focused" on for the day. I referred to this lens as a "scapes" lens and it performed excellently in its cityscapes roll this day.