Beech Tree Leaves in the Wind 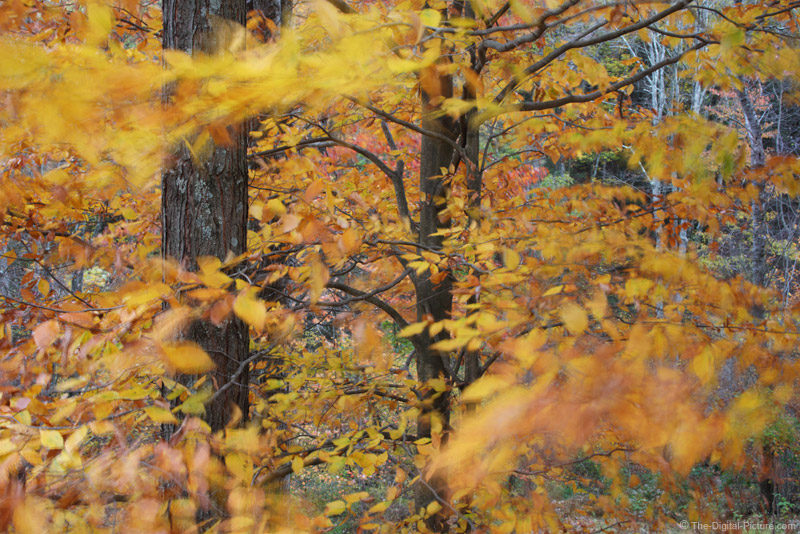 More often than not, wind is the enemy of photographers. Blowing wind puts not-fixed objects into motion, including light stands, reflectors, subjects' hair and ... leaves. Landscape photographers are perhaps most negatively affected by wind, with moving flora being their problem (along with mirror-like reflections on bodies of water being disturbed). You can't stop the wind. At least not on a large scale such as a landscape.

Fortunately, there are options for dealing with the wind.

The next option is to stop the wind, not physically, but in-camera. Use a faster shutter speed, enabled by using a narrower aperture and/or a higher ISO setting. Right, you may not be able to use ISO 100 for ALL of your landscape photos and I give you permission to bump up the ISO as high as you need to go (in case you are mentally struggling with this option). Our modern cameras can still create great imagery at high ISO settings and more often than not, noise is better than motion blur.

One way to mitigate the high ISO noise to a varying degree is to capture two images of the same scene from a stationary camera using different ISO and shutter speed settings. Later during post processing, stack the two images in Photoshop or a similar app and allow the lower noise level image to show for the sky, rocks, buildings and other non-wind-affected subjects. A touch of noise reduction on the higher ISO-captured layer should help. The result is an image with the lowest noise levels possible throughout the scene. If using this suggestion, I recommended shooting multiple pairs of frames to have more options to deal with potential subject movement overlap.

Another option available on a small scale is to stabilize the subject. Various clamping devices including the Wimberley Plamp are available to hold a subject in place while a photo is captured. I've used Y-shaped sticks stuck into the ground to keep smaller flora in place.

And the last option I have to share with you: Embrace the wind. Use a longer exposure and capture blurred leaves. I know, having a not-sharp part of the landscape frame is hard for those of us used to striving for everything sharp in the frame, but give it a try. When the wind is blowing, every frame can be unique including the position of tree branches in relation to the rest of the composition. If you think one position will be better than the others, time the shot with the branch in that location. Shoot a lot of frames with a variety of camera settings and prepare for a long review session to determine which images rise above the rest.

When composing for wind motion blur, I usually like to incorporate some non-blurred elements in the photo (such as a tree trunk) to anchor the frame. This is not a requirement, but I usually want the frame to include subjects that are either sharp or noticeably blurred as images with slight blurs may leave the viewer uncomfortable with or confused by your technique. To increase the amount of blur, zoom in or move closer to the subject so that its movement covers a larger area of the frame. Better preserving a desired composition is the use a longer exposure to give the in-motion subject time to show more movement. Use a neutral density filter if more time is needed than your desired in-camera settings can produce.

Because the path of wind-blown flora is not always predictable, composing slightly wider than what appears to be ideal is often a good decision. Crop to taste during post processing.

Part of the fun of shooting wind-blown flora is the anticipation of seeing the results. We can envision what the images are going look like, but seeing them appear on the LCD brings the effort to fruition. Hopefully with a positive outcome.

Don't let the wind be your excuse for not getting great shots. Either work around it, work with it or, my favorite option, do both!