Bald Eagle Flying with a Fish 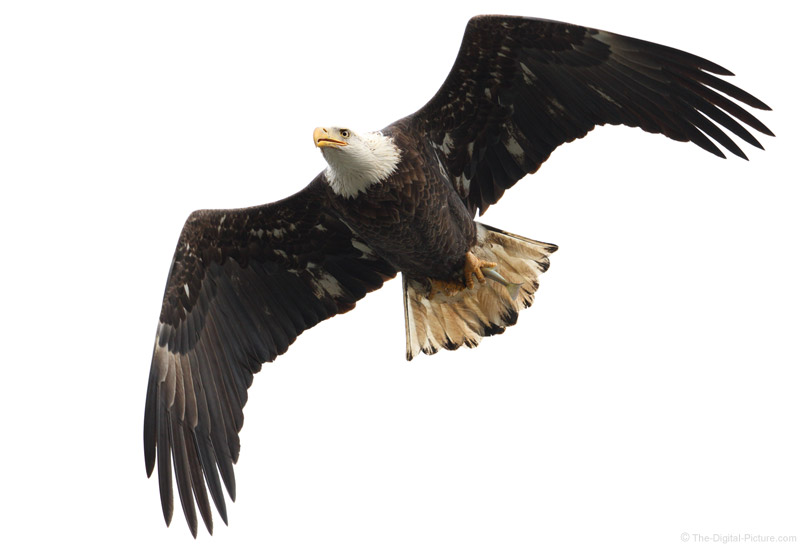 "How well does the Canon EOS 7D Mark II perform when shooting birds in flight?" has quickly become a frequently asked question. The Canon EOS 7D Mark II, especially because of its high performance AF system, high density imaging sensor, fast frame rate and modest-for-what-you-get price, is quickly finding favor with bird photographers. And, one of the biggest challenges faced by bird photographers is maintaining focus on birds in flight. Thus, the question is getting asked.

I had the privilege of spending the larger part of a day shooting bald eagles below the Conowingo Dam in northern Maryland with the 7D II this week. My goal was to discern how well this AF system could track the often-erratic movement of these beautiful birds in flight (and to hopefully come away with some nice images).

The day's moderate-to-heavy cloud cover eliminated any harsh shadow issues, but made the sky a white canvas (white sky is OK, but is not my favorite) and provided low light to further challenge the AF system. The bottom line is that I'm really impressed with my success rate from this day.

I was using the Canon EF 600mm f/4L IS II USM Lens with and without a Canon EF 1.4x III Extender behind it. Tracking these fast and erratic-moving birds with such a narrow angle of view was quite challenging, but when I kept the selected center AF point or one of the 4 neighboring AF points (based on the AF area I was using) on or even close to the bird I was tracking, most of the images were properly focused. Especially impressive was the ability of this camera to maintain focus on the birds even with backgrounds that the birds visually blended into and even more impressive was this camera's ability to maintain focus on the birds even with high contrasting backgrounds including electrical line towers and bare tree branches against a bright sky. I was using the AF Case 2 to instruct the camera to be slow to leave a tracked subject due to obstacles.

This camera is a great choice for bird photography. The consensus that I'm hearing from the other photographers frequenting Conowingo Dam is that their 7D Mark II experiences mirror my own.

After catching its dinner, this eagle in the above picture flew directly toward the camera. I began tracking and shooting at 10 fps. I have numerous good images of this eagle, but this was the most-frame-filling that did not cut off any significant amount of the bird. This image is essentially right out of the camera. I extended the canvas slightly to the bottom, added the extreme tip of the two bottom-most feathers and removed imperfections from a couple of other feathers. I changed the Picture Style to Standard (in DPP), changed saturation to "1", white balance to "Cloudy" and added a touch of noise reduction.

I have added a 10 fps burst example of flying eagles (a juvenile chasing an adult with a fish) to the Canon EOS 7D Mark II Review. The wing positioning shown in this series of images will assure you that 10 fps is definitely not too fast and at times, I needed a frame between the neighboring frames – such as at the moment the eagles grabbed a fish in the water.