Until recently, these cards found some use in the Ultra High Definition filmmaking space, but no DSLR kits needed one. In the eyes of this site's primary audience, the introduction of Canon EOS-1D X Mark II abruptly changed that. Suddenly, a huge number of photographers needed to add CFast 2.0 cards to their kits.

The pre-1D X II DSLR memory card formats Canon was utilizing (SD and CF) were not fast enough to consume the data this new camera could produce, forcing a move to a faster storage format. The CFast 2.0 memory card standard was Canon's choice. CFast cards are identical in size to CompactFlash cards but utilize a Serial ATA interface with a connector similar to but small than that of a SATA hard drive instead of a many-exposed-pin Parallel ATA interface.

As usual, there are many memory cards of this type available, which leads to the question:

How Do I Select a Memory Card? RCSP

While the anticipated arrival of a new lens or camera is enough to cause people to schedule vacation time, few people get excited about a new memory card being delivered. However, the memory card is a critical piece of a camera kit. This is the storage device you trust to safely hold your images until they are loaded onto a computer drive. So, at least a little effort should be placed on memory card selection.

Acronyms are helpful for simplification, so I made one for you to use for your memory card selection process. RCSP refers to Reliability, Capacity, Speed and Price. The camera manufacturer generally dictates the memory card standard required (with a combination of two sometimes available). Beyond the card standard, the RCSP components will help you decide the right card for you.

I have been somewhat brand agnostic when it comes to memory cards, but my baseline for card selection is to choose a well-known brand that I trust. Selecting a card from a brand name that has a significant vested interest in providing a quality product, one that stands to lose something significant if defective cards hit the streets, has worked very well for me. Failure of any card is possible, but big brand names have value and these companies are less willing to risk their reputations on questionable design quality and testing than a little-known brand.

Important to know is that just because a label has a known brand name on it does not mean that this brand had anything to do with the memory card under the label. Counterfeiting of memory cards is easy and unfortunately common due to the ease in which counterfeit cards of far lower quality can be produced and the profit margin they can be sold at. I source my memory cards only from highly reputable retailers, ensuring the legitimate source of the cards.

While not a guarantee of longevity, a long warranty period is another indicator that the card should prove reliable. Of course, the warranty counts on the brand honoring it (and remaining in business).

I want as much memory capacity in my card as I can get ... until the price gets prohibitive. The latter often means that the former is one or two steps down from the maximum available.

Some prefer to purchase multiple smaller capacity cards to avoid having all of their eggs in a single basket – to avoid a single point of failure for all images captured at an event, on a trip, etc. I subscribe to the other school of thought. Multiple cards can increase the chances of a failure of one of them. Multiple cards are harder to keep track of. Smaller capacity cards risk card-full-at-the-wrong-time issues. Simply changing cards adds risk of dust and moisture getting into the camera (I put nearly 5,000 images on the Transcend card reviewed here during an extremely dusty 4-hour dirt racetrack shoot) and changing cards with gloves on can be challenging. To avoid potential loss due to card failure, I back up my high capacity card(s) periodically during a shoot (minimally daily), but I continue to use the same card for the duration of the trip (or until nearly full).

Reality is that I can't remember the last time I had a memory card fail.

Where the multiple card strategy comes into play for me is in an initial backup strategy utilizing card rotation. I avoid re-using a memory card until I have all images safely into my formal backup process including off-site storage. Though we are talking about using multiple cards here, I prefer to use fewer high capacity cards to implement this strategy.

Memory card speeds are usually specified, but there has often been some vagueness associated with the ratings. Fortunately, MB/s ratings appear to be the new standard. These meaningful numbers must be viewed (and are increasingly provided) for both read and write. Manufacturers have historically preferred to market the read speeds as these are typically higher than the write specs.

In the camera, you are likely most interested in the card's write speed as this is the metric that affects how fast the camera's buffer will be cleared, allowing more images to be captured and making already-captured images available for review. Fast read speeds are valuable for uploading images to a computer and also valuable for quick reviewing of images on a camera.

The cards with cutting edge speed typically have a premium price and I'm often buying the next-to-fastest cards for value reasons. Some applications call for the ultimate performance, with the buffer always being available for the next shot and images available for immediate review. If you are photographing wildlife, sports and other challenging subjects, waiting two seconds for a quick image review to check exposure may be enough time for a great photo to be missed. High definition video recording often requires a minimum card speed.

In other situations, card speed may be irrelevant. A casual photographer capturing snapshots with no urgency and using a plug-and-walk-away uploading technique will not benefit from a fast card. If you are leisurely shooting landscapes, a slow card may be all that you need. The money saved by buying a slower card may be better spent on other items.

For me, one step down from the max available performance usually represents the right value.

If the RCS portion of the memory card selection acronym are satisfied, price is usually my determining factor in my card selection. As speed and capacities increase, so does price. When I determine a need for additional memory cards, I am usually trying to buy at the sweet spot on the speed and capacity vs. price curve. The latest and greatest technology usually costs noticeably more than the best-prior version and that is where the best-value price is often found.

Improving upon the sweet spot price is a sale. We often post memory card deals on the site's news page/feed and those deals often drive my purchases.

As this review is talking about CFast 2.0-standard memory cards, it bears mentioning that these cards are quite expensive compared to the slower SD and CF cards with similar capacities. As the CFast 2.0 format becomes more popular, garnering higher sales volumes, I expect their prices to trend downward. Downward, but not likely matching the slower format option prices.

Where Transcend Fits In

A card brand that has, for nearly a decade, been included in my kit is Transcend. Transcend cards (in any format) meet my RCSP formula. Transcend is a highly trusted brand offering high capacities (128GB and 256GB for the CFast 2.0 CFX650), fast speeds and reasonable prices.

When the 1D X Mark II was released, many of us suddenly needed a number of CFast 2.0 cards added to our kits. To ease the transition to the CFast standard, Canon initially offered a free SanDisk 64GB Extreme PRO CFast 2.0 Memory Card (515/240 MB/s read/write rating) and card reader in the EOS 1D X II premium kits.

Timely was Transcend's offer to send me one of their CFX650 CFast 2.0 cards. Already having a good experience with this brand, I gratefully accepted the well-timed offer.

One of the first tests I performed with the 1D X Mark II was a frame rate and buffer capacity test. Upon inserting and formatting the Transcend CFX650 CFast 2.0 Memory Card (256GB with Max. Read/Write Speed: 510/370 MB/s), I pressed the shutter release and held it down. Over 6 minutes later, I became bored and quit. The 1D X II's 14 fps frame rate, in 6:01.35, put an extremely impressive 5,068 RAW images on the CFast card, far surpassing Canon's 170 file buffer depth specification. With this card installed, the camera never filled its buffer, even with Live View shooting dumping images at 16 fps. Even with an extreme number of images captured in a burst, the last image is always immediately available for review and scrolling through previous images is very fast.

On my laptop, the Transcend card tests showed average read speeds of up to 417 MB/s and write speeds tested up to 335 MB/s The Canon-included SanDisk card's performance, shown in the dashed lines in the chart below, yielded similar read speeds (in green) but slower write speeds (in red).

To date, I have put nearly 20,000 images on my Transcend CFast 2.0 card without a single issue including nearly 5,000 images while photographing sprint cars passing by me at approximately 13' (4m) while going nearly 100 mph in the turn of a dirt track. The 1D X Mark II, with this card installed, would let me quickly glance at the LCD to ensure that everything (including exposure) was OK while still allowing me to catch the next car(s) coming around the 1/2 mi oval.

As I mentioned in the Canon EOS-1D X Mark II review, there appears to be a missing piece to the CFast standard. The SanDisk CFast card referred to inserts into the camera with the brand label to the right (seems backwards to me) and brand-label-up into the also-included SanDisk CFast card reader. The Transcend CFX650 CFast card inserts into the camera brand-label-left as I am used to (same as the CF cards) and also fits into the Transcend card reader brand-label-up. I can see SanDisk card difference leading to minor confusion, something that is not needed during the heat of the moment. 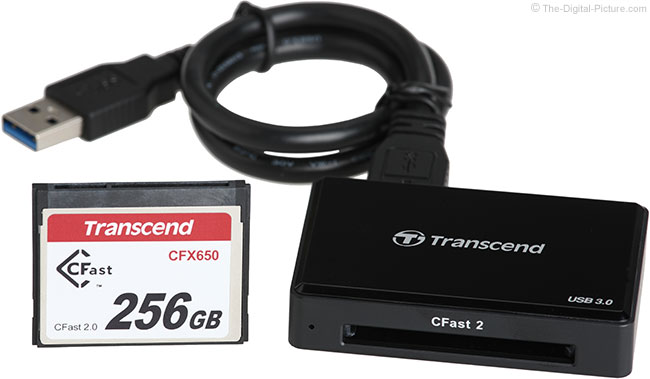 While a mundane part of the gear kit, memory cards are a critical component of successful photography. They are a necessity that we rely on, but not a piece of kit that we dream about acquiring.

Differentiating between cards available in your required format is not easy. Use RCSP (Reliability, Capacity, Speed and Price) to drive your memory card purchase decisions. Put Transcend on your short list.

My Recommended Transcend CFast 2.0 Memory Card Retailers
B&H Photo
Amazon
(Using the links on this site to make any purchase provides support for this site)
The Tip Jar