You are likely familiar with Sabrent, a top computer accessory manufacturer with a solid reputation, including for good value. Now, it is time to also put Sabrent on your radar when shopping for memory cards and readers.

To get the word out, Sabrent provided a couple of cards and readers. Specifically, I've been using:

The Sabrent memory cards have good build quality that is indistinguishable from the high-end alternatives, including the ProGrade Digital 325GB CFexpress 2.0 Cobalt Memory Card.

The readers are metal-constructed, and the CFexpress reader adds a silicone cover for increased impact protection of the already rugged reader.

Speed is a differentiating factor between memory cards, and lower-priced cards typically have lower performance.

The first performance test for the CFexpress card was Canon EOS R5 8K RAW video recording, creating a data rate known to choke lower-performing cards. The R5 was still writing to the Sabrent card after 20 minutes (creating a 371GB file) when I had to hit stop to go to a meeting. It likely would have continued writing as long as the camera was sending the data.

While that performance is remarkable and sufficient for most uses, everyone likes numbers and comparisons, so let's test the Sabrent cards against the fastest alternatives in my kit using CrystalDiskMark and a Thunderbolt computer port.

Below, the Sabrent memory cards and readers are compared with the:

Note that the ProGrade reader does not have a Thunderbolt connection. Thus, the comparison of the Sabrent vs. ProGrade reader highlights that difference vs. the brand-specific differences. Also, remember that write performance matters most when capturing movies and photos, while read speeed is important for playback and uploading images to a computer. 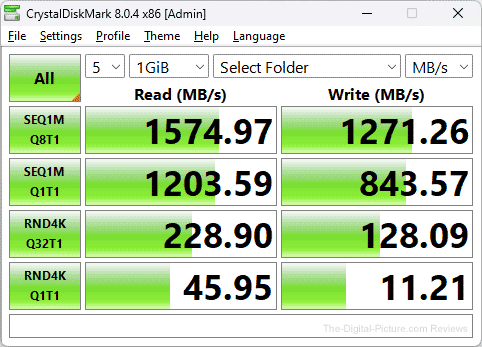 A couple of months does not meet a "long-term" use definition, but the Sabrent cards have had well over 10,000 images written to them so far with no issues. So, I am comfortable using them for important projects, including testing the Canon EOS R6 Mark II at a Canon media event.

Spending less is always desirable, and low price is a big reason to select Sabrent memory cards and readers.

At review time, the reviewed Sabrent SDXC card is $50.00 lower than the equivalent Lexar card (though the Lexar card holiday special is $50.00 off), and the Sabrent CFexpress card is the second least expensive 1TB card.

I plan to continue using the Sabrent cards and readers for daily needs. Their performance is good, I trust their reliability, and the price is low.

Sabrent CFexpress Type B and SDXC Memory Cards and Readers