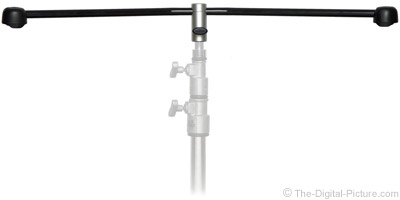 For those interested in capturing professional-looking studio portraits inside the studio and out, benefits of collapsible backgrounds include low cost, the convenience of a relatively quick setup and considerable durability (especially compared to paper backgrounds). Collapsible backgrounds are great for photo booths, corporate events, studio/on-location headshots and product imagery.

Both of the typical solutions mentioned above involve significant compromises. For instance, if leaning the background against a wall, the background will never be perpendicular to the floor and you will not have the ability to position the background higher for optimal framing of standing/taller subjects. Also, the background cannot be used in horizontal orientation unless your subject is at floor level. And lastly, a background that is simply leaning against a wall can easily fall over if not properly secured in place with something like gaffer tape. And if your support wall is painted (depending on the type of paint, surface and strength of the tape), taping a collapsible background to the wall may result in removing sections of paint when your tape is pulled away from the wall.

Compared to leaning the collapsible background against a wall, using two light stands and a studio backdrop pole (often sold as a kit) has three distinct advantages. First, gravity works well to keep the background perpendicular to the floor. Second, the background can be raised/lowered or used in portrait/horizontal orientation with relative ease. And third, the whole background setup stays securely in place.

Unfortunately, there are also downsides to this approach which must be considered. With two light stands, the backdrop pole and clamps (if needed), there is a lot of equipment required resulting in a larger, more cumbersome kit. Furthermore, this solution will likely require several minutes to fully set up. And finally, adjusting the height of the background means that you must adjust the height on one light stand and then mirror that adjustment on the other stand (and the stands may be up to 12' (3.7m) apart, depending on the length of the backdrop pole).

Thankfully, there's an alternative solution which fits perfectly in between the two main background support solutions described above as far as simplicity of setup and gear required for use is concerned. The Lastolite Magnetic Background Support is a lightweight (9.1 oz / 258g) pole measuring 24.8 x 2.6 x 4.6" WxDxH (63.0 x 6.6 x 11.7cm) with a 5/8" female receiver in the middle and two powerful magnets on each end. The background support is, of course, shown at the top this review; a close-up of its end magnet can be seen below. 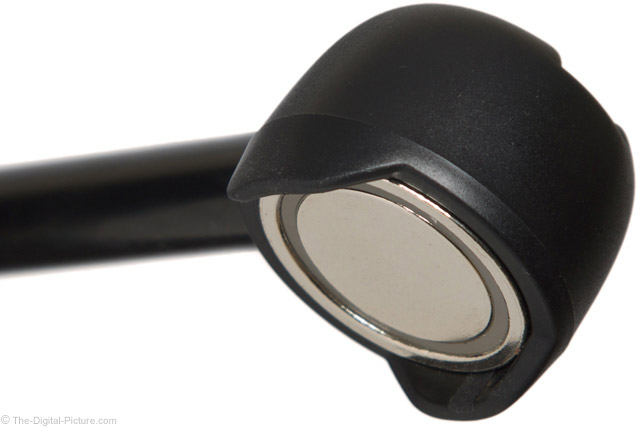 The magnets found on the ends of the Lastolite Magnetic Support hold firmly to the steel rims found in collapsible backgrounds.

With the Lastolite Magnetic Support placed on top of the 5/8" stud typically found on light (or background) stands and the tensional knob tightened, the support is ready for your background. Simply raise the background so that its edge comes into contact with the magnets; you'll hear a reassuring "snap" as contact is made. From a folded light stand and disassembled components, your background can be set up in less 30 seconds or less.

If you find yourself preferring a vertically oriented background as opposed to a horizontal one, there's an easy fix. Simply tug on the background rim to release the magnets' hold, rotate the background and snap it back in to place.

Now that we have thoroughly covered the dynamics of the Lastolite Magnetic Background Support, let's see it in action. 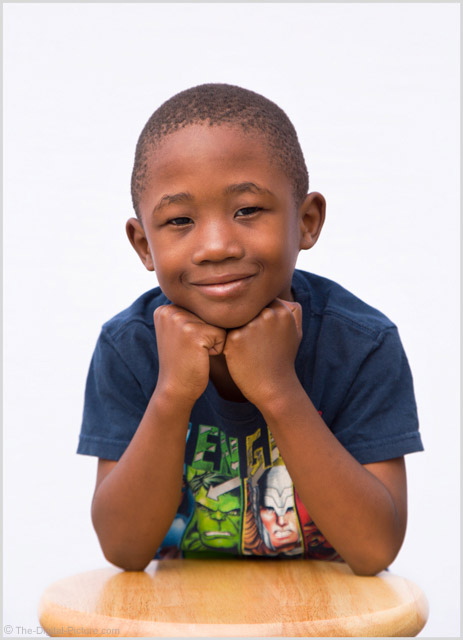 The above portrait was created using the following gear:

Without additional context for the image, a typical viewer may easily mistake this for a portrait made in a studio. However, the location used for this portrait was far the confines of a typical studio. 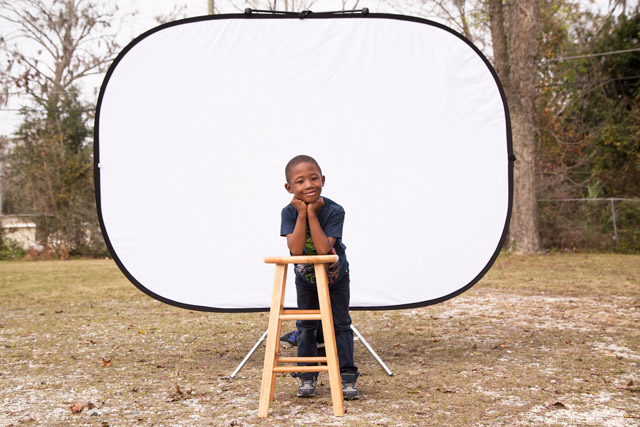 Aside from the beautifully soft overcast light, this location was far from ideal for flattering portraiture. Although it was a pleasantly warm December day, the grass in this unused parking lot was dormant (brown) and the surroundings were not what I would describe as "photogenic." However, the collapsible background in conjunction with a focal length which ensured the angle view was encompassed by the background's dimensions allowed for eliminating distracting elements from the scene.

Note that with a small amount of wind present during this portrait session, I used a sand bag to weigh down the light stand and tied one of the collapsible background's hook and loop fasteners around the bottom part of the stand to keep the background from blowing upward and into my subject.

The Lastolite Magnetic Background Support used for this review was purchased online/retail.

To be perfectly frank, I'm not generally a fan of single-purpose items. I prefer the versatility of a Swiss Army knife compared to a single bladed tool. I enjoy how a super clamp can be employed in a multitude of situations to solve a myriad of problems. However, every now and then a product does exactly one thing so well – saving me time, energy and/or frustration – that it deserves a spot in my kit. The Lastolite Magnetic Background Support checks all of those boxes. It makes using collapsible backgrounds significantly easier, it is extremely easy to transport (reducing the overall kit necessary for collapsible background use) and saves me valuable time when clients are in the studio or on-location and ready for their portrait session to get underway. It's not necessarily inexpensive, but considering the cost of an additional light stand and studio backdrop pole for a comparably secure setup, not to mention the time it saves, I consider it a bargain.