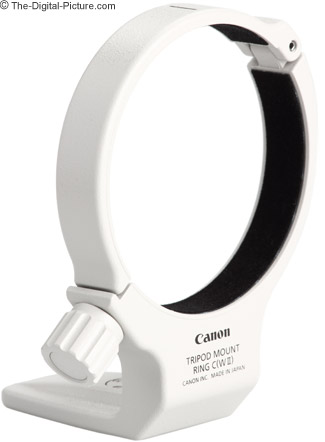 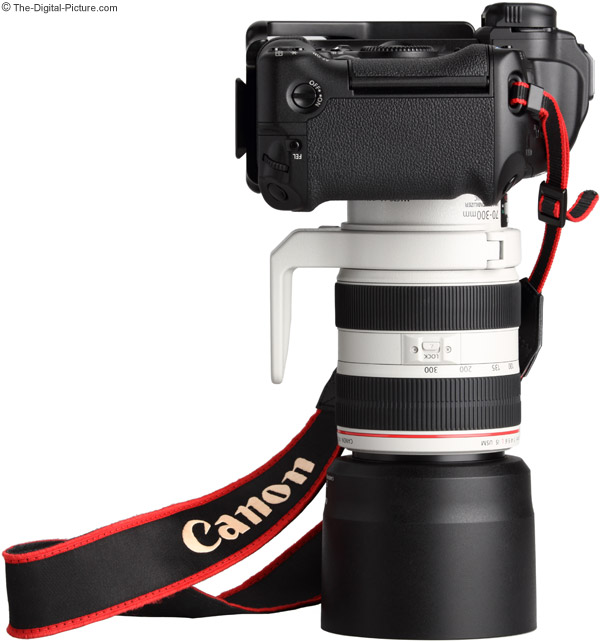 You can mount this camera and the 70-300 L lens to a tripod without the tripod ring (the camera body tripod insert can be used), but the setup is very noticeably front heavy. The centrally-positioned Canon Tripod Mount Ring C (WII) provides a much better tripod balance - and results in much less movement after the tripod head is tightened.

Better-balance is not the only advantage. Since the tripod ring freely rotates, a nice amount of tripod setup flexibility is gained. With the Canon Tripod Mount Ring C (WII) in use, switching from horizontal to vertical orientation is fast and easy. Otherwise, a major tripod head adjustment is required (such as dropping a ball head into the drop-notch). Correcting camera level is also done easily using the tripod collar.

The thumbscrew tightens/loosens the tripod ring friction as needed. Simply rotate the ring to the desired position and lock it tight. If not needed, rotate the ring to an out-of-the-way position when not in use (note that the Canon Tripod Mount Ring C (WII) may bump into certain battery grips). Alternatively, loosen the tripod ring locking knob and pull out on the thumbscrew to completely release the ring from the lens. This release is accomplished via a hinge (noticeable in the product images above). The hinged design allows the Canon Tripod Mount Ring C (WII) to be removed without the need to un-mount the lens from the camera.

A tripod ring allows various accessories to be attached to the lens - flash brackets being one of the most popular. I use a Wimberley P20 Lens Plate or Wimberley P30 Lens Plate on my Canon Tripod Mount Ring C (WII). This allows me to quickly mount the lens to any common Arca-Swiss-compatible quick-release clamp (Arca-Swiss, Wimberley, RRS ...) on a ball head, monopod clamp, flash bracket ...

Where you buy your gear matters. You expect to get what you ordered and you want to pay a low price for it. The retailers I recommend below are the ones I trust for my purchases. Get your Canon Tripod Mount Ring C (WII) now from:

B&H Photo
Adorama
Amazon.com
eBay (Choose trustworthy sellers only)
(Using the links on this site to make any purchase provides support for this site)
The Tip Jar