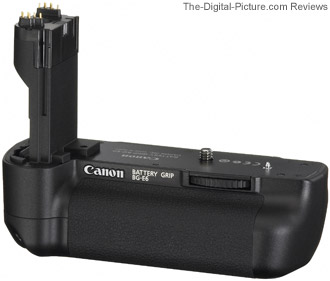 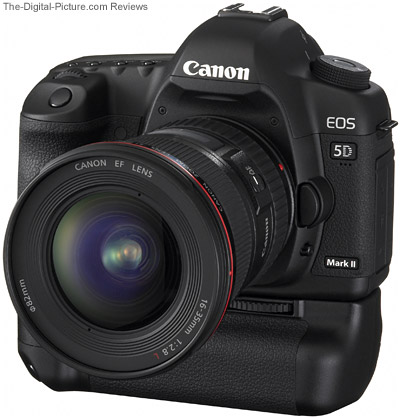 The Canon BG-E6 Battery Grip is designed specifically for the Canon EOS 5D Mark II as shown above with a Canon EF 16-35mm f/2.8 L II USM Lens mounted. To get the BG-E6 into the position shown, the LP-E6 Battery is removed from the 5D II and the battery door detaches. The BG-E6 slides up into the battery compartment and locks into place via the tripod socket screw seen on the BG-E6 just below the lens in the above image. The BG-E6 provides its own tripod adapter threads - this functionality is not lost.

The BG-E6 holds two Canon LP-E6 Batteries that deliver double the number of shots or video time from the 5D II. Alternatively, use 6 AA batteries in the included Canon BGM-E6 Battery Magazine shown below. 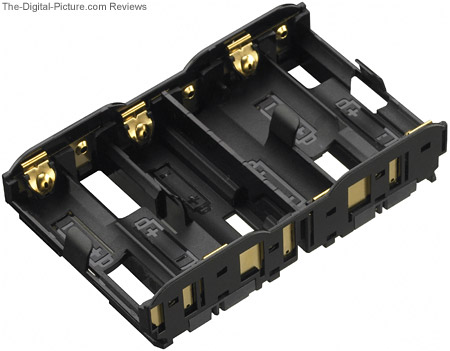 Since the AA batteries are not chipped, the 5D II is not going to show you detailed battery information when using the BGM-E6. Though the BGM-E6 is a nice feature, I don't personally find it useful. Even if you only have one LP-E6 battery, the BG-E6 still functions fine. I suppose the AA option is nice for emergency purposes.

Back to the grip. The BG-E6 is very solidly built - it matches the 5D Mark II well. They share a magnesium alloy frame and the BG-E6 retains the sealed battery compartment.

Most of the controls present on the built-in 5D II grip are also found on the BG-E6 including Shutter-Release, Main Dial, AF Point Selection, AF/FE Lock and AF-ON. And, don't forget the power on/off button - every time I install a battery grip, I have to figure out why it doesn't work and then remember that the power button is shipped in the off position.

With the Canon BG-E6 Battery Grip installed, the 5D Mark II becomes at least as large as Canon's 1-Series bodies.

In use, the BG-E6 makes portrait/vertical shooting much easier and more comfortable. I can feel the difference in my arms and shoulder after even a moderately long shoot. And I can hold the camera in vertical orientation a little steadier in this position. I find the BG-E6 a little bulky and there is a slight amount of flex where the grip matches to the 5D II at the battery compartment, but overall, I think it is a very nice accessory.