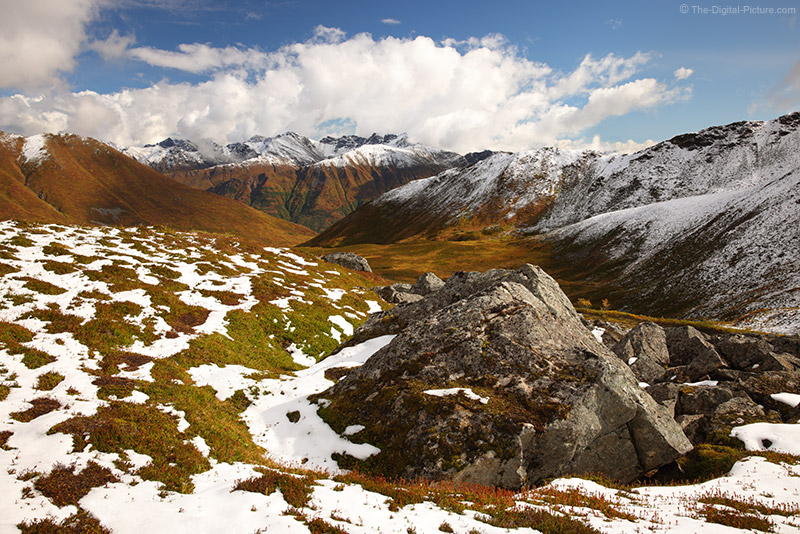 Hatcher Pass is always beautiful, but a recent snow leaving the mountains capped in white made this pass especially picturesque.

While a couple of pikas were heard (they sound like a squeak toy), the rocks proved best as a foreground on this afternoon.

The 28mm focal length was selected to keep the distant mountains relatively large in the frame. While mountains surrounded this location, the mountain peaks with the most character were what I wanted to emphasize (along with the cloud formation over them). The width provided by a 15mm angle of view (that lens was in the MindShift Gear BackLight 18L) would have been filled with mountains, but the 28mm choice on the already-mounted Canon RF 24-70mm F2.8 L IS USM Lens de-emphasized the already-large rock in front of me and added emphasis on the craggy mountain peak. At the same time, 28mm was not too long of a focal length to achieve sharp focus through the entire image at f/11, an aperture not greatly affected by the softening effects of diffraction.

I recently returned from an intense three weeks in Alaska and Colorado, working in the field with some great gear. As always, the trip was extremely valuable educationally, and the stack of images to be sorted through is a bit overwhelming. This picture was among the low-hanging fruit.