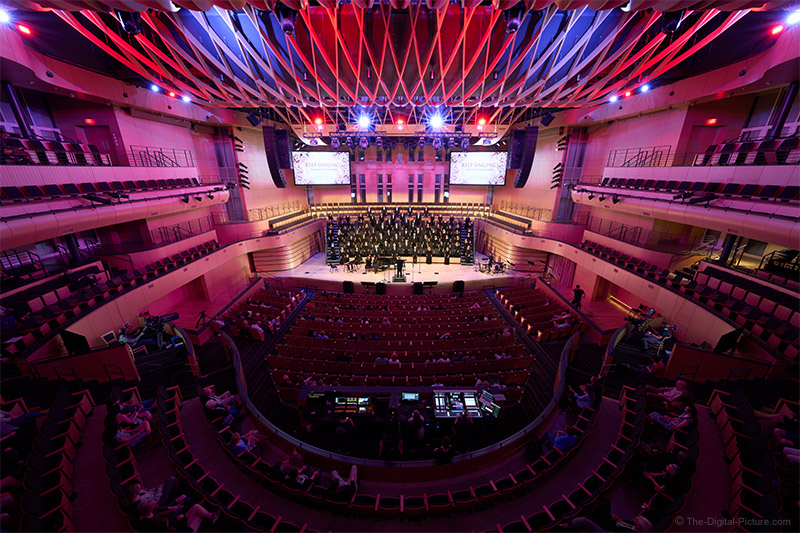 This concert hall is an impressive space — and fun to photograph.

The image shared here is a combination of three exposures.

The goal of the primary exposure (1/50, f/2.8, and ISO 400) was to capture sharp performers moving under the bright stage lights. While a 1/50 shutter speed is slow for freezing moving (mostly swaying) people, individuals were small enough in the frame for their details to not cross pixels in that timeframe.

Three brightness variations of this image were blended to even the stage lighting (it was hot in the center) and improve the transition to the darker environment. Utilizing a single image for this blending meant there was no difference in the image content, including no chorale member movement to edit for. The Sony Alpha a1's incredible dynamic range easily accommodating the brightness adjustments in both directions.

The 12mm focal length at f/2.8 provides a significant depth of field at this distance, but it was inadequate for absolute corner sharpness. A 10s, f/11, and ISO 100 exposure met that requirement. While f/8 should have been adequate for depth of field and would have produced slightly sharper details, using f/11 provided stronger sunburst effects from the lights.

The f/11 image provided all of the sharp detail required to finish the picture, but time permitted a third image capture, this one at 5s, f/16, and ISO 400, for inclusion in this blend. The narrower-still aperture result is softer than the f/11 result due to diffraction, but this setting creates slightly larger sunbursts from the lights. Only the lights from this photo are included in the final image.

Why ISO 400 for a stationary subject? The songs did not always last long enough for the additional 30+ second exposure required, and the changing light colors were another problem. The a1 shows very little noise in normal ISO 400 exposures, and you can't tell that these bright lights were not photographed at ISO 100.

Let's talk about the camera location choice for this image.

A completely level camera centered in the room is usually a great choice for photographing symmetric venues such as this one. The level and centered camera keeps the vertical lines parallel with the edges of the frame and helps avoid perspective distortion. That shot was available, and I captured some images from that location during the rehearsal.

However, I opted to shoot the live concert centered from a higher level. Ultra-wide-angle focal lengths emphasize what is closest to the camera. With the audience seated, the back of heads immediately in front of the camera would have been what was emphasized. At least as important to the decision to move up were the leading lines created by the colorful lights illuminating the ceiling architecture.

In short, I gave up big heads for emphasized colorful architecture.

Not evident in this photo is the tripod position required for this photo. The primary issue was a pair of large lights mounted directly below and extending out from the rail in the center of the hall. Those lights were prominent in the frame until I determined that two small posts used in the light supports could be utilized for tripod feet, along with the railing that was sloped toward the stage. Because the supports were not centered in the room, uneven tripod leg lengths were required to center the tripod head. This screengrab from a phone video shared with me might help that explanation. 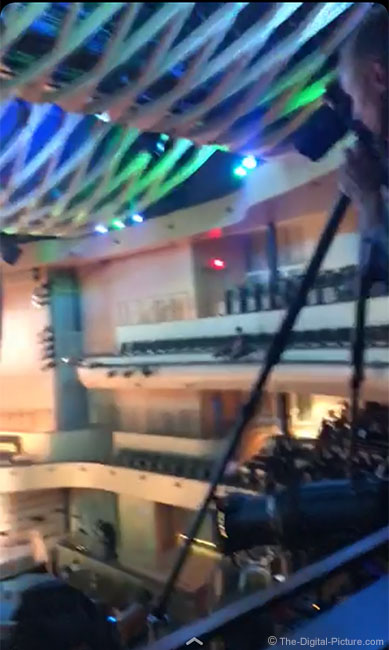 Right, that is a risky setup, and I did not have cables along for security. While no one was at risk below me, the thought of the a1, Sony FE 12-24mm f/2.8 GM Lens, and RRS TVC-24L Mk2 Tripod with BH-40 Ball Head hitting the ground was nauseating. That scenario meant my hand had to be grasping the camera or tripod or completely encircling a tripod leg at all times. While not comfortable, we (photographers in general) do whatever it takes to get the shot.