Huge Bull Moose Appears Out of the Fog 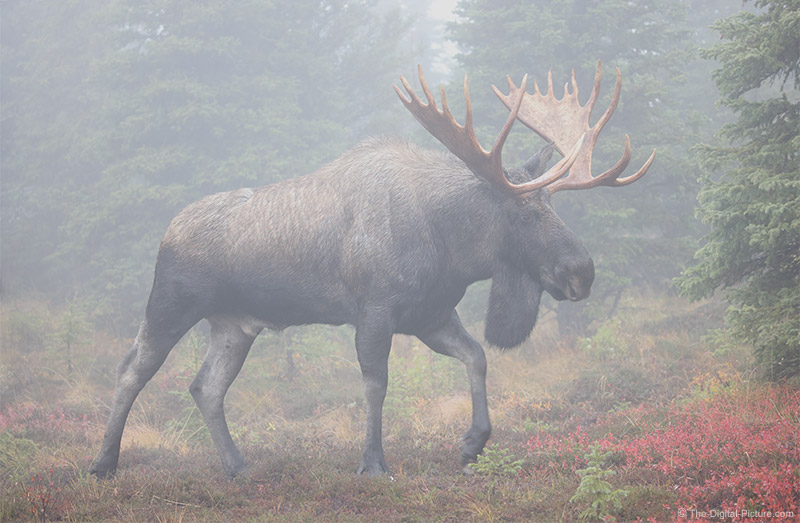 The fog was so thick this evening that I was concerned about getting lost (at least to the point of requiring the compass), and the low visibility hindered subject locating abilities. Having this monster walk into visibility was thrilling.

Despite the capabilities of this incredible camera and lens, the tiny water droplets in the fog noticeably impacted the contrast and resolution of this image, as always.

When the fog effect is undesired, a circular polarizer filter can cut the reflections significantly, improving clarity. However, in this case, I welcomed the fog's differentiating look (and didn't want the light loss incurred by CPL filter use).

One makes the most of an opportunity such as this one. The Canon EOS R5 and ProGrade Digital 325GB CFexpress 2.0 Cobalt Memory Card combination supports holding the shutter release down as long as desired (until the card is full) in high-speed continuous shooting mode, the strategy implemented for this moment. The moose beginning to angle away was provided the logical endpoint to the burst as, at that time, I expected no better images to be made.

The animal was walking at a steady pace but not so fast that the R5's framerate couldn't capture a plethora of images. This particular image stood out as a favorite because of the overall body position. The bull is angling slightly toward the camera (when in doubt of this, use the antler base juxtaposition, minimally indicating head angle) with its legs evenly separated. The front leg lifted and showing slight motion blur illustrates motion.

The RF 100-500 proved an outstanding choice for this moose hunt.