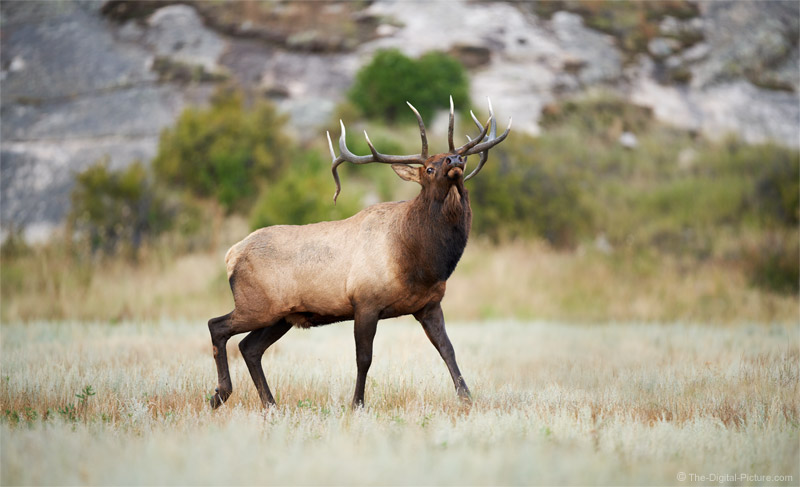 Rocky Mountain National Park is very scenic but some locations within the park have better environments for elk photography than others. Elk go where they want to and little will stop them from doing so, but I have some favorite locations and usually will pursue the elk found in these. This elk was in one of my go-to locations, featuring a low, clean foreground and rocky mountain base in the background.

Elk are very large animals and that means relatively long distances are required to fit them in the frame of a long lens (and for personal safety). Longer subject distances mean increased depth of field and that means the background will be less diffusely blurred. The 600mm f/4 focal length and aperture combination creating a three-dimensional effect that makes the subject stand out from the background is especially valuable when photographing large animals such as elk.

After seeing how sharp the Sony FE 600mm f/4 GM OSS Lens was (and experiencing how light it was), I opted to use this lens behind the ultra-high-resolution Sony a7R IV for all of my late summer and fall wildlife photography.

The bull in this photo was moving across the meadow in front of us and this great rut-characteristic chin-high pose was my favorite. The other images captured in this sequence provided a small additional amount of background that, with the lack of distracting details, I later decided to merge with the original image, creating a panorama. With the 61 MP resolution provided by the a7R IV, I didn't need the additional pixels. Moving back and cropping would have been easier from a post-processing perspective but moving back would have resulted in a missed opportunity in this instance (and the original framing would have been fine). Note that this capability likely exists in some of your images — be cautious when deleting the lesser images.

Images captured under a cloudy sky, including this one, usually readily accept some contrast increase and a modest amount was added to this image.