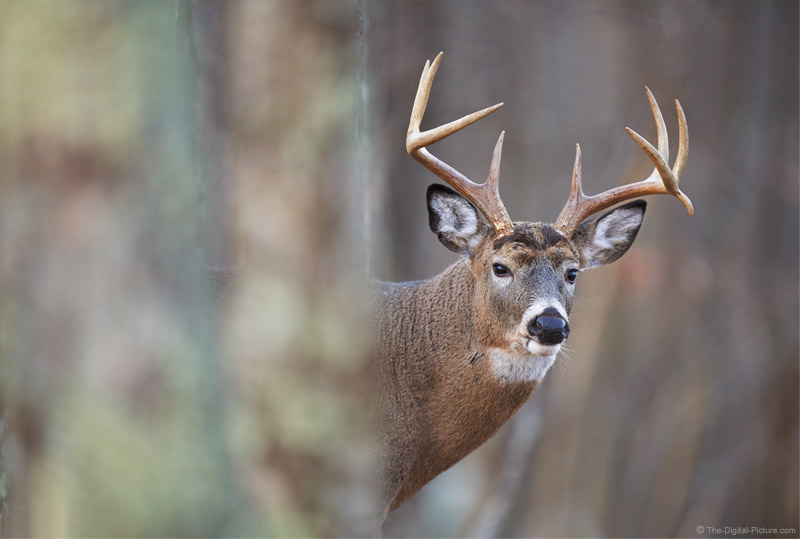 It is generally much easier to photograph deer in a field or meadow than in the forest where tree trunks and branches create obstructions and chaotic backgrounds. However, the forest is where many deer spend large amounts of their lives. Heading into the forest may reduce the odds of getting good images but the increased challenge makes a successful in-the-forest image more rewarding.

While a 600 f/4 lens is an awesome choice for obscuring a distracting foreground and background via blur, the narrow angle of view can be challenging to use in the forest due to the obstructions. A farther away view results in a higher chance of trees and branches being in the way. Despite having a Sony FE 100-400mm f/4.5-5.6 GM OSS Lens with me in Shenandoah National Park, I mostly used the Sony FE 600mm f/4 GM OSS Lens. The images this lens makes are hard to beat and once one acclimates to 600mm f/4 images, it becomes difficult to be satisfied with anything less.

All 600mm f/4 and similar lenses are very expensive but the high price has one advantage: it is a barrier of entry, making it harder for those without such a lens to compete with those having one. In a world with an unimaginable number of images being captured daily, this lens' image quality is a differentiator and those able to make the investment should frequently make use of their advantage.

I was working ahead of this buck (with a somewhat unusual drop tine), looking for openings it might pass through. He came into this opening and cooperated nicely, looking toward the camera. After quickly capturing a few images with the currently-selected focus point, I changed the focus point to a more optimal position in the frame and captured another burst of images before the buck turned its head. I selected the image with the best deer pose (both ears forward and looking toward me) and stitched another of the images captured using the other focus point for a slightly wider overall image.

This image was captured on a bright cloudy day. Clouds act as a giant softbox, eliminating the harsh shadows often encountered in the woods. Images captured in cloudy weather often appear slightly cool and low contrast is also normal for images captured under cloudy skies. Adding a small amount of contrast and saturation and warming the color balance slightly brings the image to life.

The increased challenge, increased reward concept applies to many genres of photography. Welcome ways to increase your challenge!