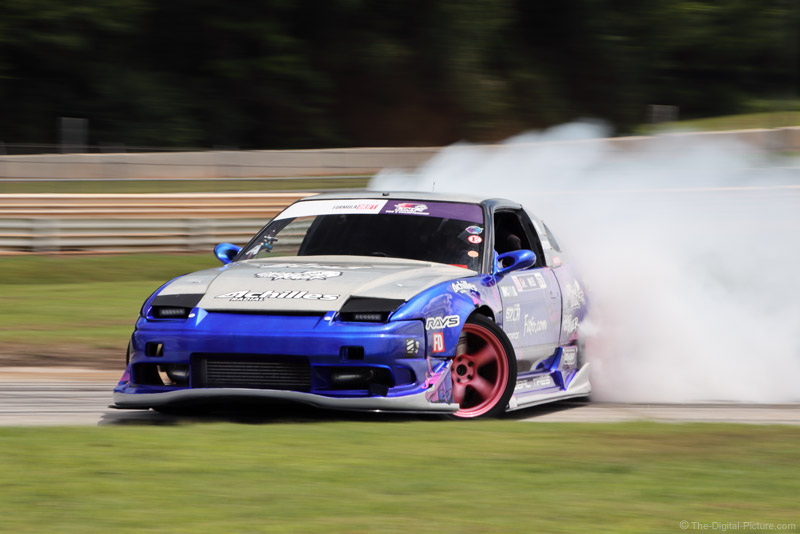 The rear tires on a Formula DRIFT (Formula D) car do not last very long and when there are only a few fast-moving cars participating in the action, short photo opportunities followed by long breaks become the schedule. The safe method of photographing this and similar subjects is to use a fast shutter speed, freezing the action for a sharp image. However, frozen action does not (usually) ideally convey motorsports action. Thus, I opted for shutter speeds long enough to result in a low success rate.

While I promptly deleted a lot of my images, I only needed a few images from this event and I wanted them to have a very strong panning blur. That plan worked.

Using a circular polarizer filter often brings substantial improvements to photos taken mid-day and a Breakthrough X4 CPL was used for this capture. To get a longer shutter speed under bright sunlight without going to an extremely narrow aperture (diffraction being the issue), a 2-stop neutral density filter was stacked behind the CPL to block additional light. Because the gear being introduced and evaluated at this event was unknown prior to arrival, I chose to take a set of large-sized filters along with a stack of step-up filter adapter rings to provide versatility and one was used for this image.

This is Dustin Miles turning right to go left and leaving tire on the track. The Canon EOS 90D with its fast 10-fps continuous shooting rate is a great choice for capturing fast action.