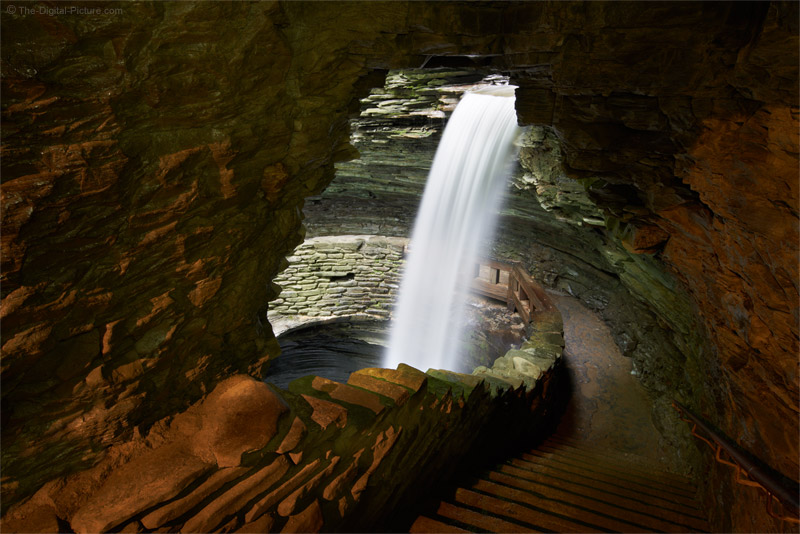 I had a backpack full of new gear that needed an in-the-field workout and the right timing for waterfall photography happened – a forecast for very cloudy skies with a strong percentage chance of rain combined with recently prior rains (to provide waterflow). So, I took advantage of the opportunity, photographing in Watkins Glen State Park.

While I knew this could be a busy park, I thought that going on a mid-spring weekday with a weather forecast that most would consider dismal would solve that problem. I was wrong. While I don't know what a normal day is like in this park, the gorge trail had plenty of people on it.

Watkins Glen is a beautiful park but being limited to the trail (mostly stone and concrete) makes it especially challenging to photograph the best scenes without random people in the composition. I spent well over an hour trying to capture this Cavern Cascade and Spiral Tunnel image. Apparently tour bus groups were being dropped off at the gorge trail's upper parking lot and being picked up at the lower lot as hundreds of people were going in the downhill direction.

At one point, I decided to leave and come back later. That approach worked especially well because, in the evening, the path light in the tunnel (very dark) better-balanced with the ambient daylight. I noticed that the tunnel walls were dark in some areas and opted to use my phone light to paint the walls slightly brighter.

I bracketed this exposure to ensure that I had the right brightness options available for HDR processing. The final image is mostly two captures with the longer exposure providing the brighter tunnel.