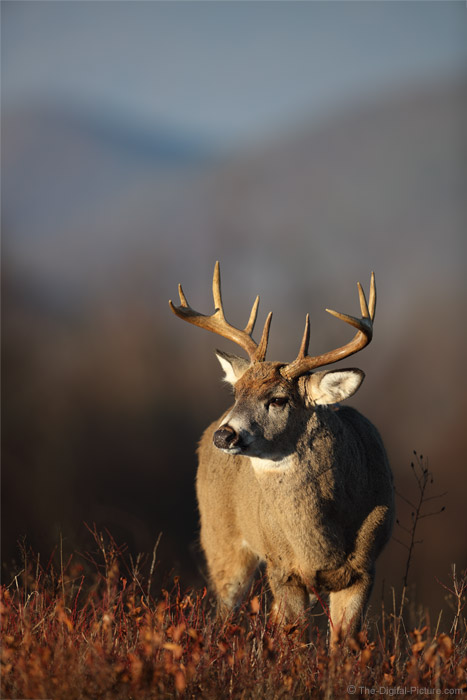 Many of you know that I usually consider the ideal wildlife light to be from behind me, directing my shadow toward the animal (though keeping it outside of the frame of course), but that is just another of the many photography rules looking for an opportunity to be broken.

It was a great start to the day. I had found this beautiful large-bodied 10-pt buck right away in the morning while there was barely light enough to see it. The buck was staying close to a calmly-feeding doe and defending against the occasional intruder. I was ready to photograph as soon as there was enough light to make it worth attempting.

When the buck moved, I would also change position to what I felt would be photographically optimal (often moving farther away as it approached) and was able to stay with the buck until the sun rose high enough to directly light it. It was at that point when the buck made a short charge to contain the doe, deterring it from going toward a distant intruder. The buck ideally stopped on the crest of a hill. The sunlight was hitting the deer nearly horizontally and I was up-light in position, but ... I saw the background that I had been looking for and that became the higher priority for me.

Shenandoah National Park is known for its many mountain ridges and incorporating them into a white-tailed deer image background is a great goal, but one that is not so easy to achieve, especially with the narrow field of view that a 600mm focal length presents. The lighting was making hard shadows, but the intruding buck was positioned toward the sun and that meant this buck was watching toward the sun, easing the shadow issue.

Selecting the to-share image from the couple-of-minutes take was challenging and I eventually narrowed the choice down to two. In the other example, the buck had its head turned even farther to the right with its left ear angled back, resulting in no shadows on the head. While that pose made the deer appear larger, I opted for the wider rack perspective shown by the more-toward-the-camera head angle.

Especially cool is that, with the Canon EOS 5Ds R's extreme resolution, I can crop this image down to a tight full-body portrait and still have about 24 mp of very sharp resolution remaining.