9/11 Tribute in Lights Reflection with One World Trade Center 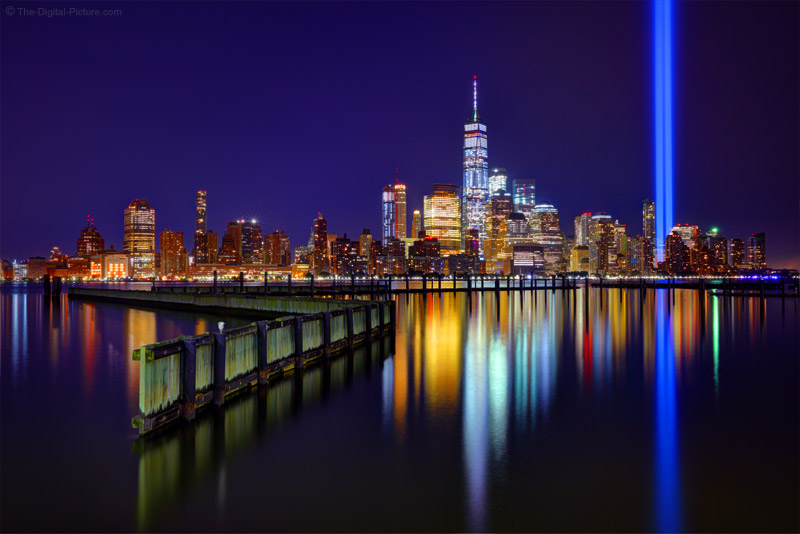 It was late (about 10:30 PM) and I still had a nearly-4-hour drive home. But, I couldn't help myself and made another stop in Jersey City/Newport. I had been in New York City since early afternoon, walking many miles with a heavy pack as I finalized my scouting in the Brooklyn Bridge Park area around Dumbo. The date was September 11th and the goal was to get at least a high quality image of the city with the Tribute in Light illuminating vertical miles of the night sky.

I hope to share an image captured from the primary-selected location later, but periodically the tribute lights are turned off to allow the attracted-by-the-light birds to disperse. I had my initial location images and, not knowing how long the lights would remain off, I decided to pack up and head for a completely different view of the city.

The attraction from of this different location? Along with a great city skyline view including the tribute lights being visible closer to the ground than from my first destination, seawalls reduced the wave action on the Hudson River, producing a cleaner reflection in the image and providing interesting leading lines. What I could not have planned for was the black-crowned night heron choosing to roost on a nearby piling. A sidewalk lamp provided just enough foreground illumination for the bird and wall to be brightness-balanced with the city lights in a set of four images bracketed up to a 1 minute exposure at f/11, ISO 100. And, the bird remained motionless long enough to be sharp in one of those frames.

After photographing here for nearly two hours, I decided that I had this location covered, including alternative framing using two camera/tripod setups. It was 12:15 AM when I packed up and headed to my car. Then I saw a slightly different angle that I needed to capture. I unpacked a camera and captured one more set of images. As it turns out, that last set was my favorite from the entire trip, the one I am sharing here.

A key for composing this image was to use a camera position that was level for both tilt and roll. While the city buildings being rendered rather small in the frame and the tallest building, One World Trade Center, having a tapered shape and being positioned close to the center of the frame, can take a slight camera tilt without looking bad, the bold-in-the-frame pair of bright lines running up the border of the frame were completely unforgiving. Any camera tilt up or down results in those lines tilting inward or outward (respectively) from perspective distortion, appearing unnatural.

To create this final image, four 1-stop-bracketed images were processed in Photomatix and the result was polished in Photoshop.

For this daytrip, I was focused on getting the best-possible image quality from known-excellent gear. For me, that meant a MindShift Gear BackLight 26L loaded with a pair of Canon EOS 5Ds R bodies and three lenses, the Canon EF 16-35mm f/2.8L III, Canon EF 24-70mm f/2.8L II and Canon EF 70-200mm f/2.8L IS II.

Yes, I also have the f/4 versions of all three of these lenses and carrying those would have meant a lighter load. While the f/2.8 aperture was not important to me for the amount of light it could take in, I like the lights in a cityscape to become starbursts and wider aperture lenses typically render more prominent starbursts than their narrower max aperture counterparts when used at narrow apertures. The f/2.8 lenses were my choice primarily for that reason alone. The overall focal length range covered by these lenses was ideal for my pursuit. I used all three (and I had the Canon EF 100-400mm f/4.5-5.6L IS II USM Lens in the car if needed).

For support, I used the RRS TVC-34 and RRS TQC-14 Carbon Fiber Tripods with RRS BH-55 and RRS BH-40 Ball Heads used respectively. Really Right Stuff gear is among the best made and these particular models are simply excellent.

While the World Trade Center building attack being memorialized by the Tribute in Light was extremely tragic, the lights themselves are beautiful and add a great element to the New York City skyline. On each September 11th, when the Tribute in Light becomes visible in the night sky, south Manhattan and the New York City perimeter become especially inspiring for photographers. I no longer remember the 4:15 AM arrive-home time and how tired this trip made me the next day, but I'll long remember the time there and the images captured, reinforcing the "Never Forget" slogan.