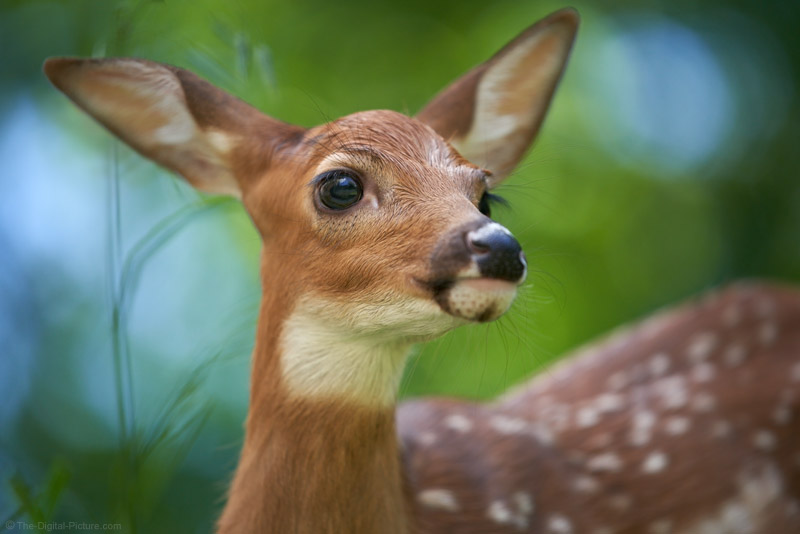 While a 70-200mm lens is seldom my first choice for wildlife photography, it can work quite well if used for tolerant and/or large animals, especially if used on an APS-C format body. In this case, the camera was full frame and the fawn was quite tame.

What tame does not directly translate to, however, is still. While the adorable little white-tailed deer fawn had no problem with my presence, it was constantly moving and often moving very fast. I had a fortunate break when it bounded over the small hill above me, stopped and turned its head. I quickly adjusted the AF point selection slightly to the eye and captured a burst in AF-C focus mode.

At 200mm f/2.8 with a close subject and relatively distant background, especially on a full frame camera body, the subject pops from the melted background.

At 20 fps, I had many images to choose from as this camera can deliver a sometimes-overwhelming number of images. I liked this specific image for a couple of reasons. The first is of course that the eye is in focus, but that wasn't much of an issue while the fawn was stopped. Nice also was the beautifully-blurred, void-of-distractions background with spring colors that attractively contrast the fawn. I also like that that both ears are fully-contained in the frame and that are very few lines of strong contrast leaving the frame is usually an aspect I like. Lines are often an important compositional element and that most lines in this image point in the general direction of the eye (or to another line in that direction) make them "leading".

The extremely versatile 70-200mm f/2.8 lens is one of the most important lenses in many kits. Going beyond 200mm with an f/2.8 aperture results in a substantially higher price tag, making the 200mm focal length the longest affordable f/2.8 option for a large number of photographers. Specifically in this case, the Sony FE 70-200mm f/2.8 GM OSS Lens, though not inexpensive, is currently the best choice for kits based on Sony Alpha cameras.