The Wind and The Waves, Mudjon Harbor, Middle Caicos 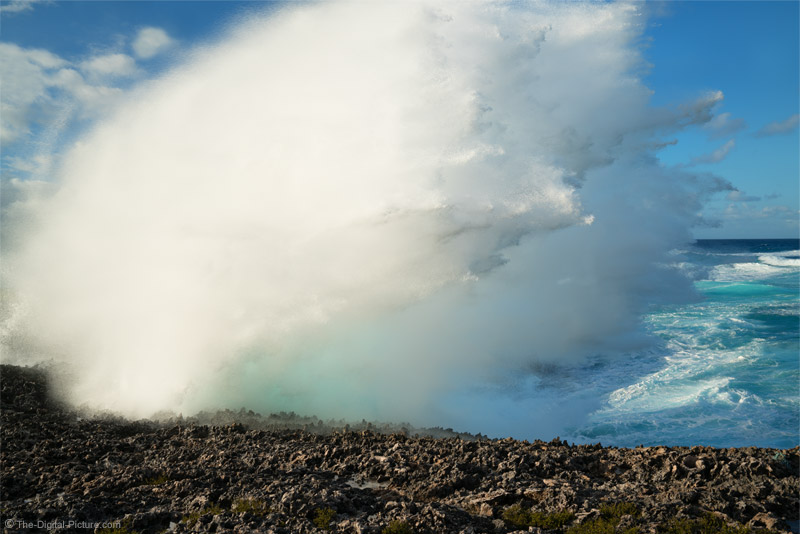 The Crossing Place Trail in Middle Caicos leads along some spectacular coastline. "Trail", however, is a rather generous term for much of what is encountered here, especially west of Blowing Hole. Very sharp rocks (the ironshore formation limestone you see in the foreground in this image) and thick brush (with occasional very-deep holes beneath) take the place of anything resembling a trail.

The Turks and Caicos Islands have the world's 3rd largest reef system protecting it, but along this trail, the reef comes close to shore. This means that, on a normal day, waves hit the coast hard. And, on a windy day, things become rather spectacular along this section of the trail.

The winds on this day (like the entire 9 days of this trip) were sustained at just over 30 mph and gusts were reaching 50+ mph. The waves were crashing into the cliffs and blowing up in dramatic fashion, easily visible from the causeway over a mile away.

Upon arriving at this location, I determined that I could safely approach the cliff and I did so cautiously. I didn't take a rain cover for the camera or a rain coat for me on this trip, but ... after thinking about the situation for a while and watching my daughter figure out how to cover her camera with extra clothes and a hat for a lens flap, I couldn't resist the opportunity. The waves were too beautiful and mesmerizing to leave uncaptured.

What I had was the MindShift Gear BackLight 26L's rain cover and the plastic bags I always store in the backpack. The large garbage bag, with three holes torn into it, went over me (it was cool out and with the wind, I was cold) and a 2-gallon clear heavy plastic food storage bag nicely wrapped around the camera with the lens directed through the opening. I held the bag tightly around the lens hood and could see the viewfinder through the bag reasonably well – well enough. The front of the lens was not protected aside of the hood, but holding the camera downward under my body during times when spray was hitting (most of the time), kept it dry. I had a dry microfiber cloth readily available for cleaning the lens when my timing was not stellar.

When a wave was timed to hit while there was little or no sea spray in the air, I would quickly move the camera into position and shoot an image (or burst of images) as the wave crashed and violently blew upward. I was learning the Sony a7R II camera's capabilities, but ... this scenario proved challenging and my sharp image percentage was not as strong as I had hoped. Still, I made some nice images.

With the quick-shooting tactic, getting the camera perfectly level (or even close to that) proved challenging (it proves challenging to me on a good day) and this shot was a bit tilted. The horizon over an ocean makes any tilt obvious and this one needed repaired. However, simply rotating the image was going to result in more of the scene being cropped out that I was happy with. I could have used a wider focal length to shoot with (the Sony a7R II has plenty of resolution), but ... I was already using that tactic. This wave was simply bigger than I had anticipated.

How did I fix the tilt? I used the Lasso Tool in Photoshop to select and area above and below the horizon where the non-splashing water is meeting sky (on the right side of the frame), being careful to draw through areas lacking details. I then copied the selection (CTRL-C) and pasted it into a new layer (CTRL-V). I pressed CTRL-T (Free Transform) and rotated the copied waterline until it was level. Using a layer mask with a soft brush, I hid the borders of the copied layer and smoothed out anything that appeared out of place in the result. The image was effectively leveled and I didn't have to crop off any of the splash.

Being in the wave zone of a rough sea is not safe and in addition to watching for photogenic waves approaching, I was constantly watching for trouble. Twice I successfully ran to drier ground when monster waves hit directly in front of me, but twice I had very large waves splash completely over me, sending buckets of water pouring from myself and the bags (enough to make a water cooler dumped over a winning football coach appear like a Dixie cup). The described bag technique, while not optimum, kept the gear (and most of my shirt) dry and allowed me to capture some fun pics.

Big waves are fascinating – I could spend hours watching them.